Dickey’s Barbecue Pit Franchise Opportunity:  Is it AMAZING?  In his “best-selling” book “12 Amazing Franchise Opportunities for 2015,”   Dr. John Hayes named Dickey’s Barbecue Pit as an amazing franchise.  We agree that the story of Dickey’s is amazing.  Amazingly sad.  Amazingly tragic for many who believed the accolades heaped on Dickey’s by endorsers who provide pay-for-praise services.  But the Dickey’s chapter in Hayes’ book shows how slick marketers can use an aggregation of phony and meaningless awards to hide falling sales and failing franchises.  PART SIX of a series by Sean Kelly

(UnhappyFranchisee.Com)  In his best-selling book “12 Amazing Franchise Opportunities for 2015” Dr. John Hayes announced that out of 3,000 possible franchises, he deemed Dickey’s Barbecue Pit to be one of the most AMAZING. Of course, it turns out that Dickey’s Barbecue Pit likely paid Dr. Hayes and BizCom Press to be endorsed as one of 12 Amazing Franchises, and to have a promotional chapter his supposedly authoritative book.

Guess Who Wrote the Analysis of the Dickey’s Franchise Opportunity?

We also know that Dickey’s in-house marketing propagandists almost certainly wrote their own supposedly objective chapter – in the book marketed and sold as authored by “expert” Dr. John Hayes.

One rather amusing indication of the true authorship of the Dickey’s chapter is the way that the narrative point-of-view shifts inconsistently from 3rd person (“Roland [Dickey’s] passionate style has been a game-changer in the restaurant industry and has made Dickey’s Barbecue the fastest growing restaurant chain in the country”) to 1st person (“At Dickey’s, we know barbecue!”).

Another is the lapse into folksy, marketing speak that no business writer – even John Hayes – would write, such as “And who wouldn’t love an ‘I Love Sauce’ T-shirt!”

There’s also the BizCom Flyer (for the 2018 book) that indicates franchisors pay $5,000  and supply their own chapters.

What Praise is Bestowed on Dickey’s by… Dickey’s?

The Dickey’s chapter of the book states:

“With 500 locations in 43 states by the end of 2014, and another 150 locations in development, barbecue has proven to be a smokin’ hot franchise opportunity.” The book states that Dickey’s had 650 locations open or in development at the start of 2015.

It’s not that Dickey’s hasn’t been selling franchises since then – they’ve sold a lot.

The reason they haven’t been growing is because so many franchise owners are going broke and closing across the country.

Unfortunately, the smoke arising from this “smokin’ hot” opportunity is emanating from burned franchisees and the investments and dreams that have gone up in BBQ-tinged smoke.

Dickey’s has an amazing legal department and an amazing store “retention” department that reportedly forces failing franchisees to turn over their failing stores so they can pawn them off to a succession of different owners.

This way, franchisees allege, three, four or even five or more owners can lose money on a single franchise before it closes.

Half of Dickey’s Franchises Have Been Closed or Transferred to Different Owners. Company Franchise Disclosure documents (FDDs) indicate that of the 1085 Dickey’s franchises opened  in the past 11 years, about half (532) were terminated, closed, reacquired or transitioned to new owners.

Dickey’s franchisees and former franchisees have been helping us track the rising list of closed and closing Dickey’s locations, including those that had been churned to different owners,  here:  Dickey’s Barbecue Pit Closed Location List

Closed signs on shuttered Dickey’s stores across the country are numerous, as are liquidation sales and auction notices.  See our gallery here:  Dickey’s Franchise Graveyard

The sheer numbers of franchise closures by Dickey’s throughout the nation inspired this Toni Award-winning* short musical presentation:  Dickey’s Barbecue Pit: The Musical

Dickey’s is so amazing we’ve been writing about it regularly as our poster child for dysfunctional &, in our opinion, predatory franchising:  Dickey’s Barbecue Pit on UnhappyFranchisee.Com

So let’s see what Dr. John Hayes says is so amazing about Dickey’s Barbecue Pit…

Bankrupt? On the Violent Sex Offenders Registry? Dickey’s Wants YOU! If scientists set out to create the least ideal person to own a capital-intensive franchise staffed by teenage workers, they might come up with Dickey’s 54-year-old Johnson City, TN franchisee James Neighbors.

Mr. Neighbors’ qualifications included (I kid you not):

After struggling to piece together enough funding (with Dickey’s help) to get the store open, James Neighbors fell $1205.58 behind on his royalty payments.  Dickey’s terminated him 3 months after he opened his restaurant and sued him for $675,122.55.

Neighbors and his wife had invested $200,000 in what Dr. John Hayes’ calls an amazing franchise.

Completely broke, James Neighbors had to serve as his own attorney to fight Dickey’s formidable and amazingly nasty legal team.

The Dickey’s chapter in “12 Amazing Franchise Opportunities for 2015” is notable in a couple of ways.

The first is how few and how unimpressive the supposedly amazing qualities of Dickey’s has.  In the book, Dickey’s marketing (as Hayes) writes:

What’s amazing about Dickey’s?  How about the lowest start-up costs for a comparable business in the U.S.?  If that’s not enough, there are multiple revenue streams for franchisees, expert support for franchisees, and a dedicated team, including a Travis Dickey descendant, to guide the brand at every touch point.

Read the rest of the story then ask for more information.

Lowest start-up costs? In the 2015 Dickey’s Franchise Disclosure Document (FDD), the company states it’s start-up costs were $122,404 to $503,404.  That might be lower than some fast-casual restaurants, but it’s far from amazing.

And what franchise doesn’t claim to have “expert support” and “a dedicated team”?

And the folksy black and white history of how Roland Dickey’s chain-smoking grandfather founded the chain and ran it til he keeled over from nicotine and pork butt fumes is heartwarming, but not that amazing.

The single amazing aspect of the Dickey’s Barbecue Pit franchise propaganda in Hayes’ book would have to be the number of questionable and/or meaningless awards that Dickey’s had amassed to that point:

…and, of course, Dickey’s has been named by renowned franchise expert Dr. John Hayes as one of 12 amazing franchise opportunities in his best-selling book of the same name.

Dickey’s knows how to sell franchises, and it is an expert at collecting and deploying paid-for awards to maximum advantage.

From what we’ve seen, the franchisor of Dickey’s Barbecue Pit, DBRI, does not seem proficient, or terribly interested in, helping its franchisees be profitable and keep their doors open to the end of their franchise agreements.

They are, however, experts at redirecting attention from the increasing number of failed franchise stores by continuously generating a parade of impressive-sounding rankings and awards.

Prospective franchise owners are, by definition, followers willing to give up their individual autonomy and independence to be part of a herd of others wearing the same logoed shirts and hats.

Many claim that they want independence and to find the hot new opportunity, but they also want the warm-fuzzy validation that others have recognized and deemed the franchise they are considering – and by extension their franchise decision – to be wise and prudent.  That’s why they aren’t out there starting their own independent businesses and calling their own shots.

Franchise sellers like Dickey’s and pay-for-praise validators like John Hayes & BizCom know this, and help franchisors amass and display their meaningless awards and fake badges of purchased credibility as if they have great significance.

But take a closer look at the accolades:

First, Dickey’s is a paying client of Technomic.  We don’t know what the exact arrangement is, but a leaked ledger from the Dickey’s Marketing Fund shows at least one $10,000+ payment to Technomic in recent years.  Technomic is not quite the objective source of research data Dickey’s would like you to believe.  Second, we all know that rapid franchise growth is not an indication of long-term success.  It’s simply an indication that the company is good at selling and getting other people’s to spend the money and take the risk to make the chain appear successful. QSR magazine is an advertising-driven promotional vehicle for restaurant franchisors.  It does not independently scour the industry to determine the “best franchise deal,” it only chooses from those who have submitted their franchises for consideration.  It also appears to be a slick way for companies to skirt the FTC regulations regarding earnings claims by including Average Unit Revenues (AUV).

Yet the Dickey’s listing in the 2012 QSR Best Franchise Deals states “Dallas-based Dickey’s, which had its AUV surpass the $800,000 mark in 2011, remains among the nation’s fastest-growing barbecue chains…”

In 2015, QSR again named Dickey’s one of its Best Franchise Deals, stating:  “Dickey’s closed 2014 with 470 stores and AUV [Average Unit Volume] of nearly $766,000. The Dallas-based concept has added about 100 new locations each year since 2011 as part of a deliberate growth strategy focused on driving quality.”

Behold the next claim by Dickey’s under the authorship of Dr. John Hayes: NRN listed Dickey’s as one of its top five fastest-growing restaurants chains in its 2015 “Second 100.”

According to NRN, designation came from its 2015 “Second 100 report, a proprietary census ranking restaurant brands Nos. 101-200 by U.S. systemwide sales and other data. This special report focuses on a smaller, more growth-oriented universe than the Top 100 report.“

So that means that Dickey’s was named the Top 5 ONLY among restaurant chains ranked #101-#200 by NRN in terms of sales and number of units.  The top 100 chains were not included nor were the many chains smaller than the Top 200. Dr. John Hayes’ & BizCom’s “12 Amazing Franchise Opportunities” is just one small cog in the pay-for-praise & deception for dollars industry that has been helping franchisors mislead and deceive franchise prospects for 40 years or longer.  It’s just one of the more obvious examples of how bold franchise marketers have become in an environment with no enforcement.

Word’s out that there’s no Sheriff in town, and the boys are free to whoop it up and shoot off their guns outside the saloon with no one to stop them.  Snake Oil salesmen like Professor Phineas P. Hayes are free to hawk their goods right out in the center of town.

Next, let’s take a look at how franchisors in Dr. Hayes Amazing Franchises Troupe use the cumulative effect of the pay-for-praise and lies-for-loot service to geberate leads and close more franchise sales.

INVITATION:  It is the policy of UnhappyFranchisee.Com to invite discussion and debate in an open forum where all sides of a dispute (as well as the general public) have the opportunity to present their views and evidence.  We invite author Dr. John Hayes, publisher Scott White, participating franchisors & franchisees, and other interested parties to join the discussion and share clarifications, corrections, rebuttals, alternative viewpoints, or other points.

Companies and individuals may post comments on any relevant page, and are also invited to submit commentary or statements by email to UnhappyFranchisee[at]Gmail.Com.  We will try our best to publish these statements with the same prominence as the allegations, and will correct factual inaccuracies as appropriate.

Readers are invited to do their own research and draw their own opinions.  We research from public documents and private tips to form our opinions, which are most assuredly incorrect some times.  Please call us out, refute, rebut, disprove and engage in the open and honest dialogue that our constitution and laws are designed to protect.  Let’s hear from you! 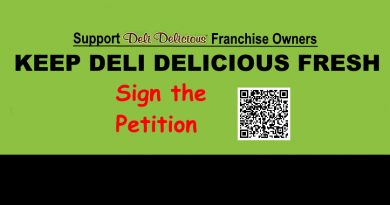