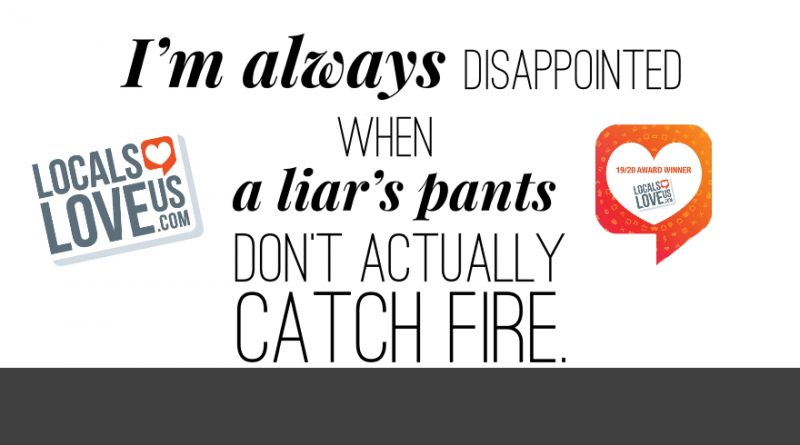 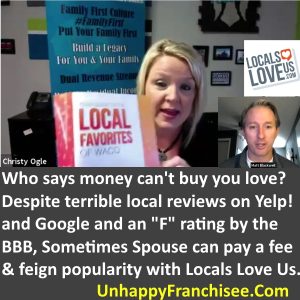 Locals are gaga… over the moon about Sometimes Spouse?

Locals be Lovin’ them up that Sometimes Spouse so much it’s embarrassing!

They won’t answer me ever since I suggested that codependency and abusive relationships with Locals is not Love.

In fact, if you gotta pay a company to give you a logo and a bunch of gimmicks professing that people love you, it’s a pretty fair bet that Locals Don’t Love You.

Sorry to Keep It Real but…  Locals Ain’t That Fond of You.

The truth is, there’s probably less than ten who Locals who Love Sometimes Spouse:

Max Ogle.  Christy Ogle.  Natalie Ogle.  Their other kids.  And their dogs.

Then there’s a group who tolerate them enough to give poor Nat a heart or thumbs-up on Facebook, but there aren’t many (any?) who will stand up and defend them publicly.

But it’s not hard to identify those who feel unfavorably about this business, including:

A. the Beatles.  But that’s only because they didn’t have Locals Love Us!

As long as you can pay the fee, Locals Will Love you Too!

No matter how badly you treat you them.

A company only their lawyers could love.

Credits:  Background music on the video by BenSound.  Tip of the hat to Jennifer Snyder of Women of Waco and Neat as a Pin Home Organizing who posted that wonderful Liar Liar graphic on her public Facebook feed.  Thanks, Jennifer!

ARE YOU FAMILIAR WITH THE LOCALS LOVE US FRANCHISE, CONCEPT, AND ADVERTISING SCHEME?  SHARE A COMMENT BELOW.

SNAP-ON TOOLS: When is it Acceptable to Call a Woman the C-Word?

One thought on “LOCALS LOVE US! A Pants on Fire Franchise?”