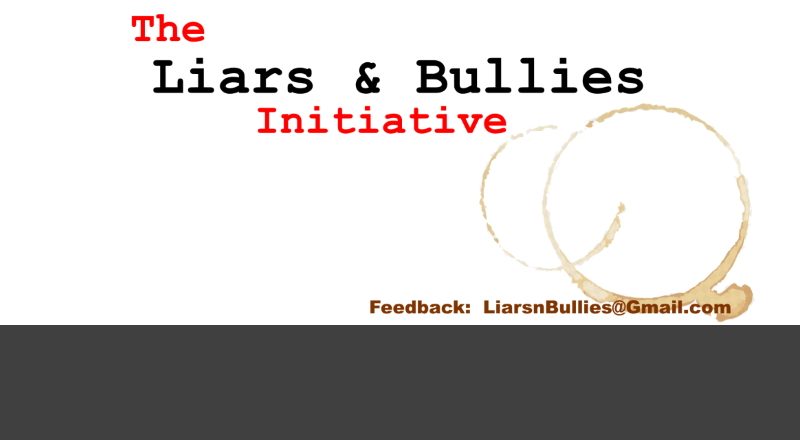 New 5 -minute video features Waco’s controversial Sometimes Spouse.  The debut of the Liars & Bullies Initiative web series puts a spotlight on the business practices of Sometimes Spouse, Waco, Texas, and its owners Max and Christy Ogle.  Episode 1 Part 1 tells how an independent contractor’s request to be paid made him the target of a barrage of bullying and intimidation tactics.  The Waco business community and police department appear to be indifferent to – if not complicit in – predatorial practices going back several years.

(UnhappyFranchise.Com)  The citizens of Waco, TX – like citizens across the country – angrily vent their frustration with the lying, bullying politicians and bureaucrats in Washington, D.C.

Those on the Left are outraged by the liars & bullies on the Right.

Those on the Right are outraged by the liars & bullies on the Left.

But where is the outrage when the lying and bullying is in their own backyard?  When it’s so close that they could actually do something about it?

The first episode of the Liars & Bullies Initiative web series poses that question to the good, respectable business people of Waco, TX:

Will you express your opinion if your neighbor, business associate, member of your church or networking group is victimizing others with dishonest, predatory behavior?

Or will you still smile when you see them?  Look the other way?  Hope you’re not next?

Sometimes Spouse, Max & Christy Ogle on Liars & Bullies:  What Do You Think?

Liars & Bullies Initiative producer Jack Skidmore is inviting comments from those who are familiar with Max & Christy Ogle & Sometimes Spouse to share their opinions and experiences.

Has Sometimes Spouse failed to pay you what you’re owed?

Have they bullied or tried to intimidate you to keep silent?

Or have you found the Ogles and Sometimes Spouse to be honest and reliable Waco community members & service providers?

Your comments and communications may be anonymous, and your identity withheld upon request.

Leave a comment below (use your real email address – it will not show publicly) or send an email to LiarsNBullies [at] Gmail [dot] Com.

We are especially interested in hearing from those we have identified as supporting (even if unintentionally) or enabling the alleged business tactics of Sometimes Spouse , Max Ogle & Christy Ogle, Natalie Ogle & her boyfriend (as yet unnamed).

Waco Police Department:  Alex alleges he was threatened by someone claiming to be a Waco police officer who made false allegations about threatening text messages.  He claims he twice called the Waco police station was told by two supervisors that the threats were justified.  Is Natalie Ogle’s boyfriend a Waco Police Officer?  Does Waco PD allow its officers to threaten innocent citizens as personal favors in private disputes?

* If you believe you are on this list in error, please contact ADMIN at LiarsNBullies [at] Gmail [dot] Com

LOCALS LOVE US! A Pants on Fire Franchise?

Is YTB International, YourTravelBiz.Com a Scam?