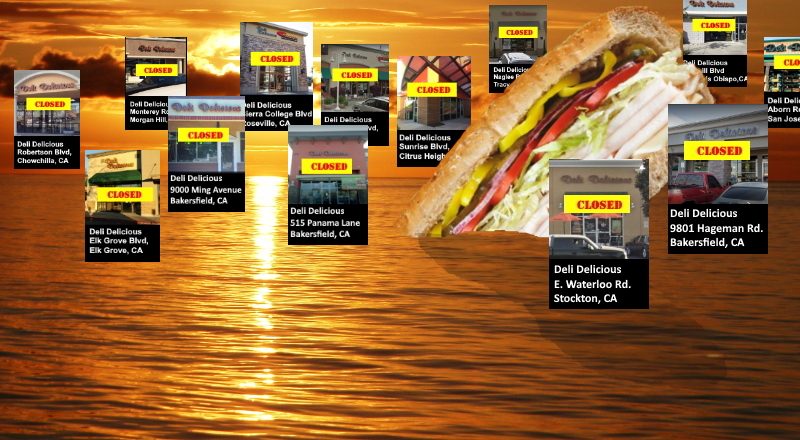 Not long ago, Fresno-based Deli Delicious sandwich chain boasted that it had “more than 100 stores open or in development.”  Today the Deli Delicious store count has dropped to the low 40s… with no announcements of any in development.  The once-promising sandwich chain is now embroiled in half a dozen lawsuits including one that alleges false advertising and deceptive trade practices. 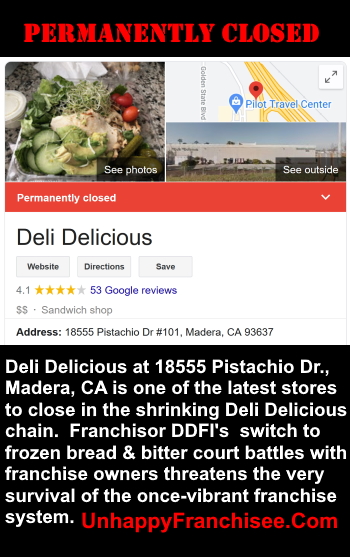 (UnhappyFranchisee.Com)  A growing number of franchisees of the once-promising chain are closing their doors for good;  many others are desperate to sell their stores and exit the chain.

Several have recently dropped their sales prices by tens of thousands of dollars but still can’t find a buyer.

Several franchise owners have reportedly handed their keys over to the franchisor, Deli Delicious Franchising Inc. (DDFI), and walked away from their investments with little to nothing.

The Bakersfield franchisee recently shuttered all three of his Deli Delicious locations, having reportedly lost upwards of $2M.  The Stockton and Madera Deli Delicious also closed.

(Why might independents have an advantage over Deli Delicious?  See below.)

Why Are Deli Delicious Franchisees Failing Where Independents Might Succeed?

The unsubstantiated “common wisdom” that franchises succeed at higher rates of independents is based on the fact that the best franchise systems, like McDonalds or Chic-Fil-A, provide powerful operational, buying, marketing advantages and name recognition that more than offsets the fees franchisee’s must pay.

However, small chains run by inexperienced and/or ill-intentioned management often charge the same onerous fees without any offsetting advantages.

While every other sandwich chain in America equips its franchisees to either bake fresh bread or receive it delivered, Deli Delicious Franchising Inc.  executives Mohammad Hobab and Ali Nekumanesh made the fateful decision to pour their energy and resources into developing a commercial bakery that would require Deli Delicious franchisees to purchase and serve its frozen bread – whether they liked it or not.

Franchisees argue that the switch to the arguably inferior bread increases their labor costs, creates operational and storage problems, and puts the chain at a competitive disadvantage.

For instance, the chain can no longer advertise that its sandwiches are made with only fresh ingredients.

DDFI responded to its franchisees’ discontent with bullying and lawsuits that are further draining company resources and prompting franchisees to leave the chain.

Why is DDFI forcing franchisees to purchase frozen bread they hate?  Because the affiliate frozen bread factory is owned by Hobab and Nekumanesh.

The sad moral to this story seems to be:  Not all franchises are created equal, because not all franchisors have the experience and/or good intentions one assumes they would have.