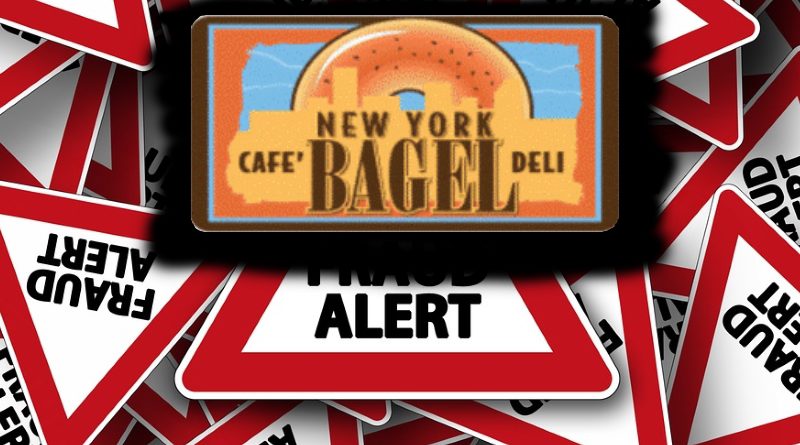 This NY Bagel Café Franchise Scam Overview page provides an index to our ongoing expose of the illicit NY Bagel franchise scheme aka NYC Bagel & Sandwich Shop, our advocacy for NY Bagel franchise victims, and our plea to state and federal law enforcement authorities to stop allowing this company to rob trusting individuals and families. Law enforcement and regulatory agencies are encouraged to use this page as a reference tool for their investigations.

(UnhappyFranchisee.Com)  In our opinion, two individuals named Joseph Smith and Dennis Mason (who also goes by the name “Keith Samuels” and other aliases), aided and abetted by a network of complicit 3rd parties, are running a lucrative franchise scam by promising trusting individuals the opportunity to join a young, successful franchise chain and own their own bagel café for an upfront fee ranging from $17,500 – $29,500.

NY Bagel Café claims that they provide 100% financing for the rest of the approximately $100,000 – $200,000 investment, and that the initial franchise fee is refundable if the franchisee turns out not to be creditworthy.

Our research indicates that the vast majority who sign franchise agreements with NY Bagel Café are neither provided funding nor have their initial fees of $17,500 – $29,500 refunded.  Dennis Mason & Joe Smith, we believe, simply keep their money, knowing that they can’t afford to hire a lawyer and won’t be able to collect a judgement even if they are awarded one.

Those who ARE able to obtain funding and manage to open a NY Bagel Café will likely lose dramatically more than just their franchise fees.

Our research indicates that more than 90% of the NY Bagel Café locations that opened have shuttered their doors, and the franchisees’ investments were lost.

Despite being provided proof of numerous violations of franchise and business opportunity laws and anti-fraud statutes, so far the Federal Trade Commission (FTC), state franchise regulators, state attorney generals and the FBI have failed to protect citizens from this (in our opinion) predatory scam.

NY Bagel Café continues to run deceptive ads on Craig’s List, continues to harvest franchise fees from undercapitalized franchisees, and continues to brag about store openings even in states where they cannot legally sell franchises.

NY Bagel Café has provided prospective franchisees with “disclosure documents” that indicate they started franchising in 2012, and have had no closures or terminations.

Our research shows that NY Bagel Café has opened and closed more than 30 failed locations… some of them more than once.

Here is the list of locations NY Bagel Café doesn’t want you to know about:

The Franchise Graveyard shows the storefronts of the many dead NY Bagel Café franchises, providing indisputable proof that the NY Bagel Café is an extremely high-risk venture – and those risks are not disclosed as required by law:

The Virginia State Corporations Commission investigated complaints against NY Bagel Cafe, Joseph Smith and Dennis Mason aka Keith Samuels and determined that they violated Federal and State franchise laws by selling three unregistered franchises to Virginia residents.  Of the three, one never opened, one opened and closed shortly thereafter, and one is still operating:

From the number of lawsuits Smith and Mason have been hit with… to the fact that the franchisor’s corporate status has been revoked… to the fact that they sold an illegal franchise to a military veteran and widowed mother of three which closed in months…  here are 10 things about NY Bagel Café everyone should know:

Are franchisees being paid to create an illusion of success?

A lawsuit brought by West Chester, PA franchisees all the way back in 2011 contains very specific allegations that we have heard from other alleged victims as well, including violations of franchise disclosure laws and illegal earnings representations made during the franchise sales process:

NY Bagel Cafe gives franchisees a list of their 17 “Approved Vendors.”  We tried to contact each one and found most of the contacts were no longer reachable and those who were said NY Bagel Cafe prospects were too unqualified for them to finance.  Many asked to be taken off the NY Bagel Lender List.

We have reported NY Bagel Café for advertising & selling franchises in states that legally require registration.  Read the status of those state investigations here:

Despite not being registered to sell franchises in Maryland, NY Bagel Café brags about the opening of their illegal Ocean City, MD location:

One lawsuit even alleged that the franchisor’s corporate status has been revoked cannot, legally, transact business.  We checked and also found it revoked:

Our one small victory:  We got NY Bagel Café franchise ads banned from the largest franchise advertising network due to fraudulent misrepresentation and violations of their Terms of Service.  Yay for us!  Though it came to late to save some victims.

If you have given any money to NY Bagel Café, Joseph Smith or Dennis Mason, contact us here confidentially:

We also encourage anyone who feels they have been defrauded to file complaints with multiple state and federal agancies.  Links are provided here:

LearningRX Insider Secrets: How to Negotiate a Better Price from LearningRX