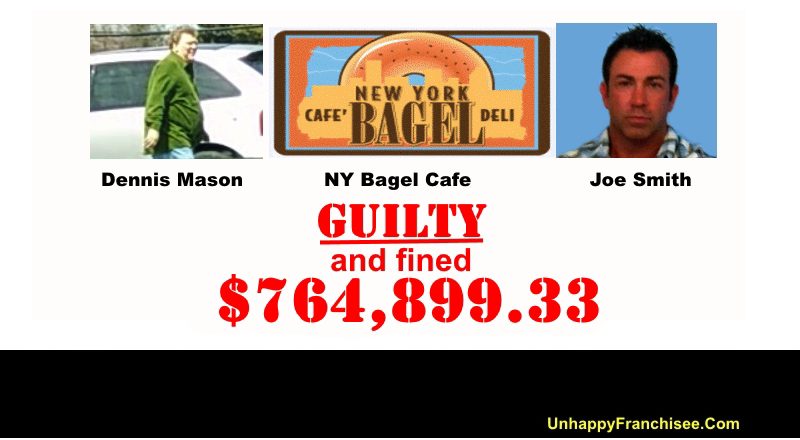 NY Bagel Café, Joe Smith and Dennis Mason aka Keith Samuels, aka Brian Scofield have been found guilty of violating Virginia franchise laws and deceiving three Virginia consumers.  They’ve been ordered to repay the franchise fees to three victims, plus fines and court costs in excess of $700,000.

Most of all, we’d like to thank and commend Mr. Barry Braun, who was the primary investigator on the case.

UnhappyFranchisee.Com Filed the Complaint Against NY Bagel Café in June, 2015

We filed with the Commonwealth of Virginia a complaint alleging that Joe Smith and Dennis Mason were promoting and selling unregistered franchises to Virginia residents and providing them with bogus documents and fraudulent misepresentations.

Investigator Barry Braun was assigned to the case, and we provided him with some victim contact information and much information about the fraudulent sales scheme of Dennis Mason and Joe Smith.

The investigator, the Hearing Examiner and commission counsel all verified that the information and allegations made by UnhappyFranchisee.Com was (and is) accurate.

They have ordered them to repay the commission $28,899.33 for the cost of the investigation.

And they have ordered them to repay the victims more than $61,000 paid in franchise fees.

However, the judge offered an incentive:  If the victims are repaid within 90 days of the order, the judge will waive $675,000 in fines.

On September 30, 2016, the State Corporation Commission (“Commission”) entered a Rule to Show Cause (“Rule”) at the request of the Division of Securities and Retail Franchising (“Division”) alleging that New York Bagel Enterprises, Inc. (“New York Bagel”), Joseph V. Smith (“Smith”), and Dennis Kenneth Mason a/k/a Keith Samuels (“Mason”) (collectively, “Defendants”) violated certain provisions of the Virginia Retail Franchising Act,  § 13.1-557 et seq. of the Code of Virginia (“Act”). Specifically, the Rule alleged the Defendants on three occasions violated: (i) § 13.1-560 of the Act by offering and/or selling unregistered franchises in the Commonwealth of Virginia (“Virginia”); (ii) § 13.1-563 (2) of the Act by making false statements or material omissions to franchisees in connection with the offer or sale of a franchise; and (iii) § 13.1-563 (4) of the Act by failing to provide franchisees a disclosure document that had been cleared by the Division. The Division requested restitution, civil penalties, and costs of investigation, and an injunction banning the Defendants from further violations of the Act and from future franchise sales in Virginia.

Following service of the Rule upon them, the Defendants filed no answer or other responsive pleading to the Rule, or otherwise communicated with the Division.

The hearing on the Rule was convened on January 11, 2017. The Division appeared by its counsel, Donnie L. Kidd, Esquire. The Defendants failed to appear. The Division moved for a default judgment, which was taken under advisement. Pursuant to the Rule and after accepting evidence regarding service, the Hearing Examiner accepted into the record the affidavit of the Division’s investigator, Barry Braun, and the attachments supporting his affidavit.

On January 26, 2017, the Hearing Examiner issued his report (“Report”) which thoroughly summarized the factual and procedural history of this case, as well as the evidence and arguments presented at the hearing. In his Report, among other things, the Hearing Examiner found that the Division established, by clear and convincing evidence, that the Defendants violated: (i) § 13.1-560 of the Act on three occasions by selling New York Bagel franchises to three Virginia residents after the Division denied New York Bagel’s franchise registration application in August 2012; (ii) § 13.1-563 (2) of the Act on three occasions by making untrue statements of material fact or omitting material facts from disclosure documents in the offer and sale of a franchise to three Virginia residents; and (iii) violated § 13.1-563 (4) of the Act on three occasions by offering and selling three franchises to Virginia residents without providing those persons with a disclosure document that had been registered with and cleared by the Division.

Based on these findings, the Hearing Examiner recommended, among other things, that:

(i) the Commission adopt the findings contained in the Report; and

(ii) the Division’s motion for judgment by default should be granted.

The Report allowed the parties 21 days to provide comments. Neither the Defendants nor the Division filed comments.

NOW THE COMMISSION, upon consideration of the Rule, the record, the Hearing Examiner’s Report, and the applicable statutes, is of the opinion and finds that the Hearing Examiner’s overall findings and recommendations are reasonable and should be adopted, except that the Defendants shall first be afforded an opportunity to provide restitution to the three Virginia franchisees pursuant to § 13.1-570 of the Act before assessing a penalty against them.

Accordingly, IT IS ORDERED THAT:

(1) The Division’s motion for judgment by default is hereby GRANTED.

(7) New York Bagel is hereby PERMANENTLY ENJOINED from registering or  participating as a franchise in Virginia.

Law enforcement and attorney generals can contact us for victims willing to share their stories and experiences. Check back for new posts being published on an ongoing basis.

ARE YOU FAMILIAR WITH NY BAGEL FRANCHISE OPPORTUNITY, JOE SMITH OR DENNIS MASON? PLEASE SHARE YOUR OPINION BELOW or Contact UnhappyFranchisee.com