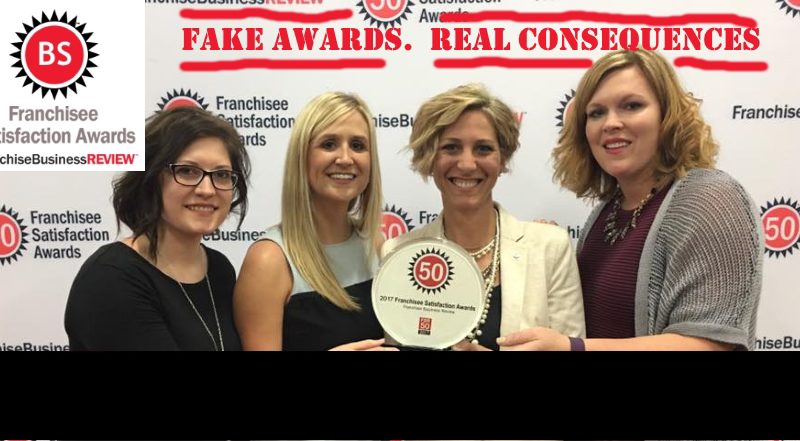 Franchise Business Review (FBR) claims that it is a legitimate research firm that provides prospective franchise owners with critical, objective information they need to make a sound investment decision.  Despite threats from FBR CEO Eric Stites, UnhappyFranchisee.Com is continuing to examine the methodology, business model, claims and business practices of franchising’s #1 pay-for-praise provider.  This page is an index to our active investigation into Franchise Business Review and the franchise endorsements it promotes.

(UnhappyFranchisee.Com)  Franchise Business Review did not invent the pay-for-praise phenomenon in franchising.

It has, in our opinion, pushed Pay-For-Praise and Endorsements-for-Dollars service to a new and disturbing level.

Franchise marketers have long used important-sounding and near-meaningless franchise awards and rankings to convince wide-eyed business seekers of their credibility. There’s the “Franchise Direct List Of Top 100 Global Franchises,” and the “Top 100 Franchises of 20__” by the Franchise Gator advertising portal, along with top lists by every advertising category.

For restaurant franchisors, there are the Fast Casual Top 100, the QSR 50 and the Nation’s Restaurant News “NRN Power List.”

There’s a limit, though, to how much credence a fully functioning adult would give to these awards since their promotional purposes and reliance on franchisor ad dollars is so obvious.

However, Franchise Business Review takes it one further.  FBR claims that it is a legitimate and impartial research company, and invites prospective franchisees to use its rankings to make the most important business decisions in most of their lives.

Have you worked with Franchise Business Review or read their reviews?  Share your opinion with a comment below.

So let’s take a look the Top 8 Reasons to Scrutinize representations made by Franchise Business Review:

#1  Franchise Business Review Continues to Claim MODE Franchisees Are Among the Most Satisfied Despite an FBR Showing the Opposite is True. Franchise Business Review continues to promote the struggling MODE retail franchise as a Top Franchise for 2017 based on its supposedly high franchisee satisfaction.

Stites has admitted that FBR is ignoring a negative survey taken in January, 2017 and promoting the outdated survey results from a year ago.

With fewer than ten franchisees, MODE does not even meet the criteria to participate in FBR “research,” according to its stated methodology.

Why is Franchise Business Review publicly promoting a deceptive claim based on invalid, outdated survey results?

When asked how much MODE paid for the false accolades its received from Franchise Business Review, President Michelle Rowan said “we do not feel obligated to share any information about who has, or has not paid, for the service. It’s not relevant to our lists or reports.”

Read more about the MODE franchise and its FBR “Top Franchises for 2017” award:

UnhappyFranchisee.Com debunked the fake success story and prompted a Washington State Investigation of its unlawful earning’s claims.  You Move Me Corporate Counsel admitted it was improper and ordered it removed from the company website.  Why does Franchise Business Review still promote the story on their website?

#5  Franchise Business Review’s Endorsement of the Our Town America franchise.

Can the Happy & Healthy Products franchise truly have one of the highest franchisee success rates in the country when it has 42% franchisee turnover?  Full story coming soon...