7-Eleven is possibly the most contentious franchise in America at the present time.

With 7-Eleven’s Japanese owners wanting to quadruple the number of U.S. locations in coming years, the fireworks have just begun.

UnhappyFranchisee.Com is the only place to get the real, uncensored story on 7-Eleven, as franchisees, employees, vendors and other insiders here can comment and discuss the issues openly, candidly, and anonymously.

“7-Eleven: The Price of Convenience” on ABC

Please watch the full video here, then return and leave a comment below: Gold Walkley Award-winning reporter Adele Ferguson returns to Four Corners with an investigation into the 7-Eleven business empire with revelations of dodgy bookkeeping, blackmail and the mass underpayment of its workforce.

7-ELEVEN: Did NCASEF Initiate the 7-11 Franchisee Protest in Vegas? [OVERVIEW] 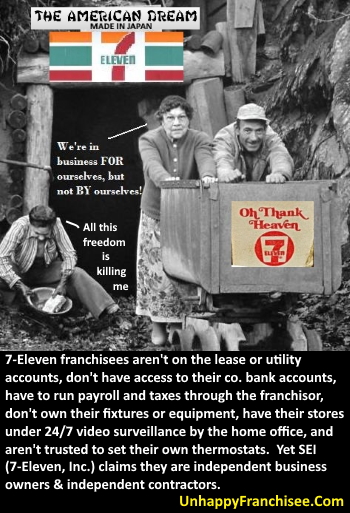 WHAT DO YOU THINK?  ARE YOU FAMILIAR WITH THE 7-ELEVEN FRANCHISE, 7-ELEVEN INC. AND SEVEN AND I HOLDING CO.?  PLEASE SHARE A COMMENT BELOW.

15 thoughts on “7-ELEVEN on UnhappyFranchisee.Com [UPDATED]”