Our video “Can SCORE Advisors be Trusted?” prompted a very prompt & professional response from SCORE CEO Bridget Weston.  Instead of answering our concerns, CEO Weston’s letter raises another question:  “Can SCORE’s CEO Trust Her District Directors?” by Sean Kelly

It’s not my intention to make her look foolish.

As a busy executive with an important job, it’s quite understandable that she would take the word of long-time District Director Peter Fong over some smart-ass blogger like me.

She should have an assistant who can use all available resources to quickly determine something as simple as whether someone is (or was) a SCORE client or not.

Unfortunately, it seems that “all available resources,” the word of her District Director and/or the word of a SCORE franchising expert are not enough.

Fool her once, shame on them, is my take on it. Next time is on her.

Is – or Was – Mohammad Hobab a SCORE client?

Our video “Can SCORE Advisors be Trusted?” raised a number of questions about whether SCORE mentor and subject matter expert Ali Nekumanesh violated the SCORE Code of Ethics.

SCORE prohibits its volunteers from activities that are or might be perceived to be conflicts of interest with their client businesses.

They cannot become shareholders, officers, or provide funding for their mentorees.

SCORE volunteers cannot refer clients to vendors or service providers that they have an interest in, or that are owned by friends or family.

The video shares some Deli Delicious franchisees’ contentions that SCORE’s Ali Nekumanesh used his influence to take control of franchisor DDFI and exhibit undue influence over its CEO Mohammad Hobab (who does not speak, read or write English).

They claim Nekumanesh’s misguided, unethical and secret formation of a required vendor company owned by him, his wife and CEO Hobab, and his brutal use of legal threats and lawsuits to force compliance, is destroying the Deli Delicious chain, the brand and their livelihoods.

We identified 6 separate potential violations of the Ethics Code by Nekumanesh in the areas of compensation, employment, ownership, funding, directorship and forced purchasing.

Central Valley SCORE District Director Peter Fong allegedly dismissed and tried to discredit our video to his superiors as a personal attack related to a franchisee lawsuit.

He ignored our emailed invitations for clarification, correction or rebuttal.

He ignored the 5-page interview request and list of questions we then sent to him.

Accordingly, we have looked into these allegations using all available resources, and have found no evidence that Mohammad Hobab, nor Deli Delicious, was ever a mentoring client of SCORE’s.

Therefore, there is no mentoring relationship associated with our organization. 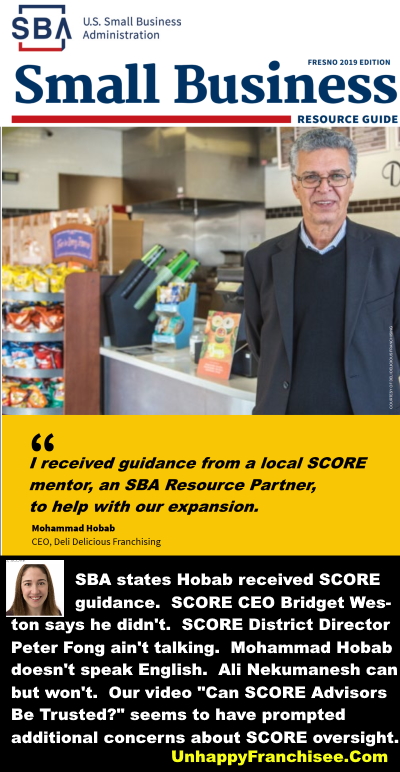 Bridget Weston asked for us to send her any evidence we have to the contrary.

We sent her the Deli Delicious Mohammad Hobab success story feature in the SBA Resource Directory 2019.

The feature article states that:

With the help of SBA financing and counseling, Deli Delicious has become a franchise…

SCORE is the counseling arm of the SBA and SCORE’s Ali Nekumanesh mentored Mohammad Hobab in the franchising process, but the claim could be made he was acting as a private consultant.

However, in regard to the bakery venture financed through the SBA and owned by Ali Nekumanesh, his wife Debbie and Hobab, the article clearly states that DD’s Bakery was a SCORE client.

I also received guidance from a local SCORE mentor, an SBA Resource Partner, to help with our expansion.

Is Hobab Lying About Being a SCORE Client?  Is Nekumanesh?  Is Peter Fong?  Is the SBA?

Ali Nekumanesh is a local SCORE mentor who is also a part-owner of DD’s Bakery, Inc.

He is an officer of DD’s Bakery.  He uses his position at DDFI to force Deli Delicious franchisees to buy from his bakery and sues those who refuse.

The SCORE Code of Ethics prohibits even the appearance of conflicts of interest such as these.

It seems clear that, if DD’s Bakery and/or Mohammad Hobab received guidance by SCORE, Peter Fong would be obligated to terminate Ali Nekumanesh’s connection with SCORE.

According to the SCORE Code of Ethics,  Ali Nekumanesh was required to:

Seek advance advice about the propriety of any action or inaction that they have reason to believe may be or may lead to a violation of the SCORE Code of Ethics before they or others engage in the activity or fail to act.

It seems that, at the very least, Peter Fong would be obligated to:

…consult the district director or SCORE Vice President of Field Operations concerning the proper decision. Any volunteer requesting advice from any chapter, district or national officer shall receive a decision in writing.

Did Peter Fong Delete Records of DD’s Bakery Being a SCORE Client?  Or Did Hobab/Nekumanesh Lie to the SBA? 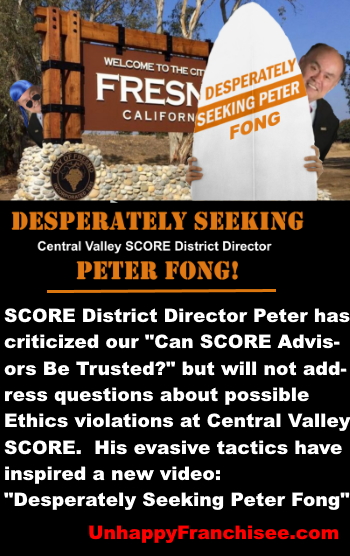 Only Peter Fong and Ali Nekumanesh (& maybe Mohammad Hobab) can clear up this mystery… and they aren’t talking.

One hypothetical scenario would be that DD’s Bakery was entered into the SCORE database as a client, but was deleted by Peter Fong when this controversy heated up.

Another scenario is that Ali Nekumanesh embellished the story to give the SBA false impression that the bakery scheme was better-researched than it was.

Another scenario is that a writer at the SBA made the false claim to bolster the SBA’s role in the development process, as SCORE is a “resource partner” and closely tied to the SBA.

Because, for the time being, the answer to “Can Score Advisors be Trusted?” is up in the air.

Is an SBA SCORE Advisor Destroying This California Franchise Chain?