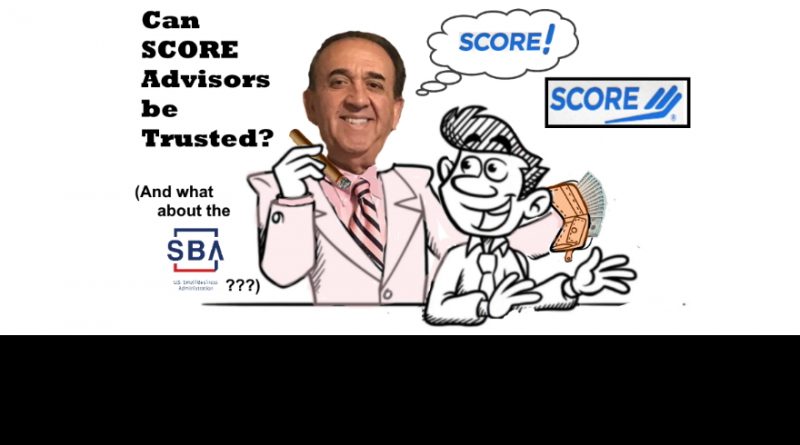 SCORE is a non-profit organization funded by the Small Business Administration (SBA).  SCORE provides FREE business advice and mentoring to entrepreneurs and would-be business owners.  It claims its mentor volunteers are “selfless” and dedicated only to client success.  However, in the video “Can SCORE Advisors be Trusted,”franchisees of a California sub chain claim a prominent volunteer from Central Valley SCORE is destroying their successful businesses for his own enrichment.  Does SCORE have a volunteer Code of Ethics and rules against this?  If so, who is in charge of enforcing them?  by Sean Kelly

At some point, they started referring to the organization simply as SCORE.  The reason?  More than 30% of the volunteers are actively employed.

They are still in the game.  They are still actively seeking income.  Unlike “retired executives,” many still may have active profit motives.

Unless strictly screened and monitored, it would seem likely that volunteers who also have active for-profit consulting companies might see SCORE as an opportunity to generate leads, clients and opportunities for their own enrichment.

The video “Can SCORE Advisors be Trusted?” presents the story of a successful California franchise chain, Deli Delicious, that went from “Rising Star” to “Falling Star” in the course of a year.

Franchisees, former franchisees, former employees and at least one major vendor for the chain say the blame lies clearly on the destructive influence of a SCORE advisor, EECU board member and owner of the Colorado Grill burger chain, Ali Nekumanesh.

Please watch and let us know your thoughts:

Watch “Can SCORE Advisors be Trusted?” and Let us Know What You Think.

Please share your comments or questions below, or email in confidence to UnhappyFranchisee[at]gmail [dot]com.

If you are willing to be interviewed for a follow-up post on the subjects raised, please email your contact information.

Everyone discussed here is invited to provide corrections, clarifications and/or rebuttals for us to act on and share.

Is an SBA SCORE Advisor Destroying This California Franchise Chain?

CUPPY’S COFFEE: AAFD Not Getting Its Share of the Spoils