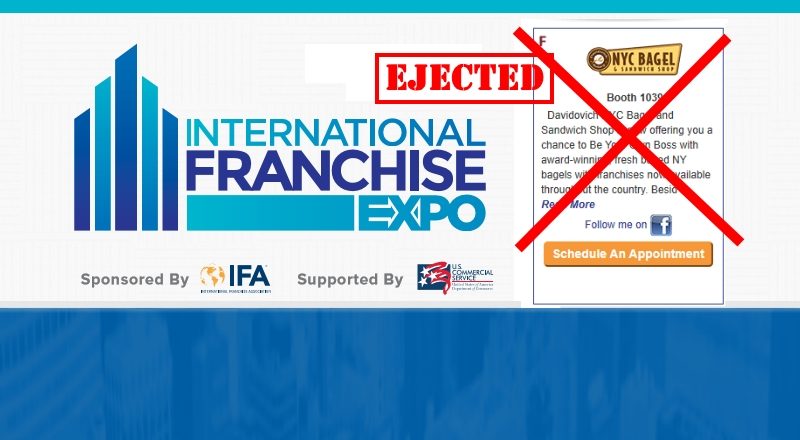 UPDATE: This post has been updated to reflect the quick and decisive action taken by the International Franchise Expo (IFE) to investigate & ultimately eject exhibitor Davidovich NYC Bagel & Sandwich Shop from its franchise expo.  Craig’s List franchise scammers whose fraudulent practices have been documented & exposed in three state investigations is exhibiting under a new name at the International  Franchise Expo (IFE) May 30 – June 1, 2019 at the Javitz Center in New York City, NY.  Franchisor exhibitors should expect unfair competition and lost leads to a competitor deceptively promising full financing and no franchise failures.  Prospective franchisees should be aware that more than 90% of those who paid franchise fees never opened and 99.9% of those who opened eventually failed.

(UnhappyFranchisee.Com)  UPDATE:  This post was originally published Thursday, May 30 at approximately 11:30 am E.S.T. with the headline “IFE International Franchise Expo is Promoting a Blatant Franchise Scam.”  After receiving our warning, Tom Portesy and IFE officials immediately got together with Franchise Section Chief of the New York Attorney General’s Office Joseph Punturo, who was an exhibitor and speaker of the show, and Assistant Attorney General of Maryland, Dale Cantone, who was also a scheduled speaker.

Franchise Section Chief Joseph Punturo determined that the Davidovich NYC Bagel & Sandwich Shop FDD failed to include legally required disclosures, and CEO Joe Smith was asked to pack his booth and leave the show less than 24 hours after the UnhappyFranchisee.com warning post was published.

A warning has been issued for attendees and franchisor exhibitors of the International  Franchise Expo (IFE) being held May 30 – June 1, 2019 at the Javitz Center in New York City, NY.

The IFE is an international trade show produced by MFV Expositions, sponsored by the International Franchise Association and assisted by the Department of Commerce/US Commercial Service.

According to the MFV website, the IFE is the premier annual event for the franchise industry

IFE is one of the few shows supported by the US Department of Commerce. Through international buyer outreach, the show attracts investors from nearly all 50 states and over 100 countries around the world. From domestic or international expansion to selling single units, area developments, or master franchises, IFE is the industry’s one-stop shopping event. The IFE promises franchise sellers the opportunity to “Engage face-to-face with qualified prospects… “ and “engage with current and future prospects throughout your sales funnel.”

One of the “opportunities” being hawked at the IFE is a known Craig’s List scam now being promoted as “Davidovich NYC Bagel & Sandwich Shop” franchise opportunity.

The NYC Bagel Franchise Graveyard shows the storefronts of the many dead NY Bagel Café franchises, providing indisputable proof that the NY Bagel Café is an extremely high-risk venture – and those risks are not disclosed as required by law:

We have been warning potential victims and urging law enforcement to act since 2013.  Here is an index of our more than 40 blog posts: There are currently 200 Craig’s List ads promoting their scam.

They are being promoted through the International Franchise Association and the IFE.

Their fraudulent Franchise disclosure document is posted in the Frandata SBA Franchise Registry, and they are eligible for SBA-guaranteed loans that have already resulted in a default.