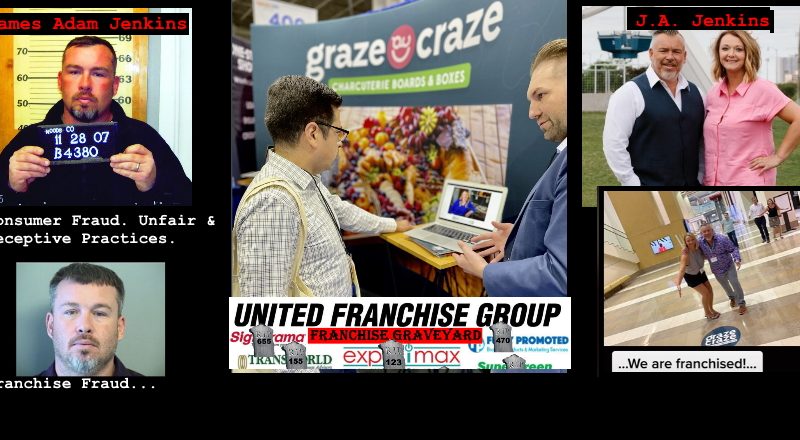 United Franchise Group (UFG) is facing more and more questions about their representations, potential misrepresentations and material omissions regarding their sale of Graze Craze franchises.  What else aren’t they disclosing to prospective franchisees… and state franchise regulators?  by Sean Kelly

Despite the fact that J.A. Jenkins does presentations to prospective and current franchise owners and oversees the Graze Craze affiliate stores, UFG chose not to disclose his involvement with Graze Craze, nor his background or his criminal history in either the 2021 or the 2022 Graze Craze Franchise Disclosure Documents (FDDs).

It’s likely UFG will try to dismiss or minimize the role J.A. Jenkins played in the Graze Craze franchise program.

Which, if any, of these criminal charges and civil actions would be required disclosures if he were disclosed is a matter better determined by federal and state regulators.

However, UFG’s decision not to disclose founder Kerry Sylvester in its initial FDD (she was added after we objected) and not to disclose J.A. Jenkins in any of the three FDDs nor state registrations certainly seem like attempts to hide material facts from prospective franchisees.

Does J.A. Jenkins oversee the operation of those affiliate stores?

Did J.A. Jenkins provide UFG with the store financial numbers represented in the FDDs given to franchisees and registration state regulators?

The UFG Graze Craze Item 19 states “The revenues and expenses have not been audited by certified public accountants nor have we sought to independently verify their accuracy for purposes of the financial performance
representations.”

Ray Titus’ nephew, Brady Lee, signed a Certification under penalty of law that all statements in the California registration, including the FDD, are true and correct.

Note:  UnhappyFranchisee.Com invites any individuals and companies (including UFG, Graze Craze, J.A. Jenkins & Kerry Sylvester) discussed on our site to provide corrections, clarifications, explanations & rebuttals which we will give priority attention.  We invite alternative opinions and interpretations in the spirit of free and open discussion.  We share public information and anonymous tips to better help you conduct your own investigations.  Please do your own thorough due diligence.

ARE YOU FAMILIAR WITH JAMES ADAM JENKINS AKA J.A. JENKINS?  ARE YOU A UNITED FRANCHISE GROUP (UFG) OR GRAZE CRAZE FRANCHISEE?  A GRAZE CRAZE EMPLOYEE OR VENDOR?  PLEASE  SHARE A COMMENT BELOW!