A week after all three Bakersfield Deli Delicious franchises closed, the owner of the Stockton, CA location announced that yesterday, November 15, 2020, would be its last day in business.  Two other franchisees have reportedly turned their stores over to the franchisor and exited the system.  Franchisor DDFI’s bullying and lawsuits against franchisees in the midst of the pandemic has prompted a biting new parody video called “Deli Delicious: The Final Days.” 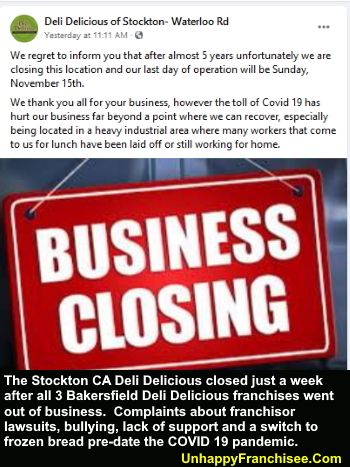 This past weekend, the franchisee of the Waterloo Rd. Stockton, CA Deli Delicious announced that Sunday, November 15 would be its last day in business.

In addition to outright closures, we’ve been told that the Deli Delicious franchise locations in Atwater, CA and Lodi, CA are being turned over to franchisor DDFI (Deli Delicious Franchising, Inc.).

The owner of the Lodi franchise is listed as Hari Randhawa.

Best wishes to these former Deli Delicious franchisees who have lost hundreds of thousands of dollars, and deserved better support and treatment by DDFI.

On Saturday, November 14, 2020 an announcement was posted on the Deli Delicious Stockton – Waterloo Rd. Facebook page:

We regret to inform you that after almost 5 years unfortunately we are closing this location and our last day of operation will be Sunday, November 15th.
We thank you all for your business, however the toll of Covid 19 has hurt our business far beyond a point where we can recover, especially being located in a heavy industrial area where many workers that come to us for lunch have been laid off or still working for home.

The once promising Deli Delicious franchise chain began to decline in 2018 due (in our opinion) to misguided and greed-driven management decisions by CEO Mohammad Hobab and EVP Ali Nekumanesh.

The result of these management decisions – and Hobab’s unwillingness to change course – is spoofed in the parody video “Deli Delicious: The Final Days.”