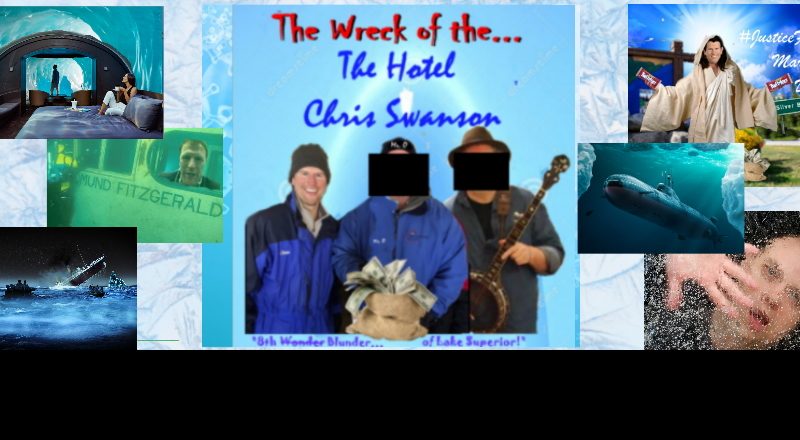 This is an initial excerpt of a parody song and potential stage show based on the controversial & embattled mayor of Two Harbors, MN, Christopher Swanson and his mentor, consultant, partner and backer, Mr. O. Mr. O is the celebrated reclusive billionaire whose podcast is “Ask a Billionaire.”

Mayor Christopher Swanson has become widely known and controversial for proposing his tiny town of Two Harbors (pop. 3,570) convert to cryptocurrency, proposing and seeking funding for a $400M underwater hotel in frigid & turbulent Lake Superior, allegedly using his position as Mayor to promote his own businesses and non-profits, and for suing Duluth Monitor for saying so.

Currently, the residents of Two Harbors have voted to hold a recall election to oust Christopher Swanson as Mayor.

This parody video is a tribute to Chris Swanson’s vision and entrepreneurial drive. Mayor Swanson refuses to compromise on his vision OR his dreams, even when his unimaginative and dull constituents correctly criticize his bold plans for being conflicts of interest, detrimental to Two Harbors and highly delusional.

UnhappyFranchisee.Com represents reclusive enigmatic folksinger and non-billionaire Boney Fingers and owns the rights to the epic musical that may turn out to be the “9th Wonder of Lake Superior.” Our plan includes an underwater dinner theater in Two Harbors, Minnesota with a dinner show featuring a reimagining of the Wreck of the Edmund Fitzgerald. The new interpretation includes a happier, inspirational ending in which Christopher Swanson rescues the bitcoin-mined ore AND the crew.

With cooperation and political muscle from Christopher Swanson and crowdsourced funding and grants matched by Mr. O, we could break water on the new project as early as Q4 2022. This parody performance features original lyrics, stock photography, and images used under the doctrine of Fair Use.

It is dedicated to the ninja sisterhood known as #JusticeForMarksDrive. You know who and why you are. And you rock!

We apologize to Charlie Parr and the residents of Duluth, Minnesota for killing him in the second verse.  In the words of Chicken of the Sea, “Sorry Charlie!”

The live performance video of Charlie Parr was sourced all the way from my iPhone.  It was recorded November, 2018 at the Chameleon Club in Lancaster, PA.

No folksinger’s were harmed in the filming of The Wreck of the Hotel Chris Swanson.

My poaching of a credited photograph of Charlie Parr led me to discovering an amazingly inventive and skilled photographer named Shelly Mosman.

Hang in there, Two Harbors!