Snap-on dealer responses range from support to skepticism of Sally Regian’s online protest against the tool giant’s treatment of her husband.

However, a small group of Snap-on franchise owners lashed out with surprisingly hurtful and vulgar insults, emailing the woman that she was a c*nt and suggesting she commit degrading acts. One of those dealers has now issued a public apology to Sally Regian. Warning: This post contains vulgar, offensive language.

(UnhappyFranchisee.Com)  A Snap-on Tools franchise owner has acknowledged that hurtful words matter, and subjecting others to hateful or derogatory insults online can backfire in unexpected ways.

Snap-on Dealer #1 had responded to a group email Sally Regian sent with this reply:

…you are a cunt and you know you husband fucked that’s why you are getting a divorce……wonder what you account and IRS have to say about your dirty books.

Stop sending out spam emails, take me off your list and not mention my name on facebook, the internet or anywhere in your legal mess of a scam you are trying to pull so you can walk away with more money from your divorce!

Before publication the dealer, whom we’ll call Snap-on Dealer #1, was given multiple chance to provide an explanation, clarification or apology, but would only acknowledge that he “responded to an email sent to me with a poor choice of words…”

One day after the blog post was published, Snap-on Dealer #1 contacted us with this apology for Sally Regian:

I am truly sorry for calling you a cunt in an email, it is not my character to do so and you didn’t deserve it.

I unfortunately let myself get wrapped up in your current lawsuit and facebook group page with Snap-on.  I don’t know either you or your husband in person and past judgment with  what information that I know and have heard second hand about your situation.

Only you and Snap-on know all the true facts hopefully this will be settled fairly in court with lawyers.

I am not looking to cause any more trouble, put my nose where it doesn’t belong or call anybody any more names.

You have put yourself in the spotlight and I do not wish to share it.

Please accept my apology and best of luck with your battle against Snap-on and your spinal surgeries, I did not catch you were in the battle with health problems and do not wish that on anybody. Snap-on Dealer #2, the Snap-On Tools dealer who wrote the other offensive email message to Sally Regian quoted in the blog post, has not responded to multiple inquiries. Snap-on Dealer #2 wrote to Mrs. Regian: Go suck a bloody dick with aids you old ugly redneck cunt.

So far Snap-on Dealer #2 hasn’t responded to invitations to defend or clarify his attack on Regian, or to apologize.  The offer remains open…

We’ve also have not heard back from Snap-On Incorporated.

We sent an email (with a link to the blog post) to corporate counsel for Snap-On Incorporated, Dana L. Dombrowski, shortly before the Thanksgiving holiday weekend inviting a comment or statement regarding their dealer’s comments – which were sent over the Snap-On email system and used the Snapon.com business email addresses.

One of the issues we pose to Snap-On dealers and corporate executives is whether these messages herald a new or worsening culture of sexism and misogyny among the mostly-male tool industry.

DO YOU THINK SNAP-ON HAS A SEXIST CULTURE AND OLD BOY’S CLUB MENTALITY? OR IS CIVILITY DYING THROUGHOUT AMERICAN SOCIETY? 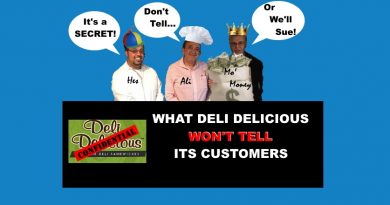