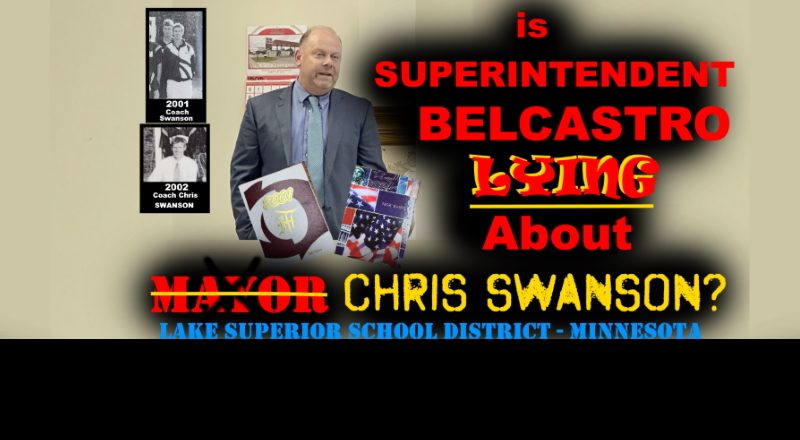 Superintendent of Lake Superior School District Jay Belcastro claims that after a diligent searching, they can find nothing that indicates that disgraced mayor and now-admitted sex offender Chris Swanson was either a student or an employee of the school district.  Yet the evidence posted below, including district newsletters, meeting minutes and Two Harbors H.S. yearbook photos, indicates otherwise.  Is Superintendent Belcastro publicly lying about the school’s – and his – association with Chris Swanson?  Does cronyism trump child safety in Two Harbors, MN?  By Sean Kelly

What had been an “open secret” hidden by sealed juvenile records was confirmed by Swanson himself in an interview with the Star Tribune.

The next logical rumor to investigate was that the sex offender Swanson had been subsequently hired as Two Harbors High School soccer coach by Lake Superior School District – which covers both Silver Bay (where the assaults occurred) and Two Harbors (where swanson later became mayor).

You can read Jay Belcastro’s (in my opinion) disingenuous & defiant response letter here:

Request: Any data mentioning Mr. Swanson’s involvement in the “extension program for soccer and computer instruction (as Pure Driven)”.

Response:  The School District does not have and is unaware of any “extension program” it ever offered in soccer and computer instruction and, therefore, cannot locate any data responsive to your request absent clarification of the data you are seeking.

Lists of courses published in the school district’s “Good News” newsletters between 2013 and 2016 include one adult soccer class taught by Chris Swanson and nearly 20 computer and Internet-related courses with Swanson’s company “Pure Driven” listed as instructor (See screenshots).  The Sept. 2014 newsletter appears to have been deleted from the district’s website.

Question for Mr. Belcastro:  Can you please explain this seeming contradiction? 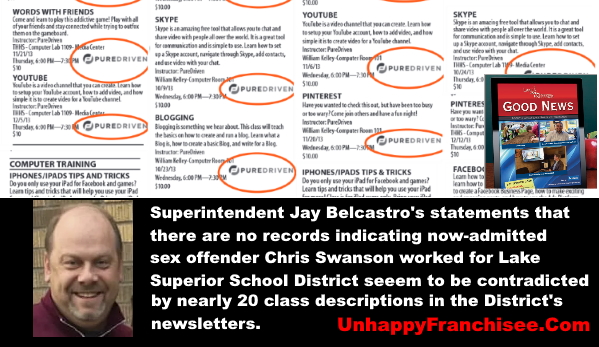 Was Chris Swanson Approved & Hired as a Volunteer by Lake Superior School District?

The minutes for the regular meeting of the School Board of Lake Superior Independent School District No. 381 held on Thursday, February 14, 2013, 6:00 p.m. (attached0 contains the following entry:

Question for Mr. Belcastro:  I understand that “Chris Swanson” is a common name.  Was this the same Chris Swanson recently recalled as mayor, or perhaps a different Chris Swanson? 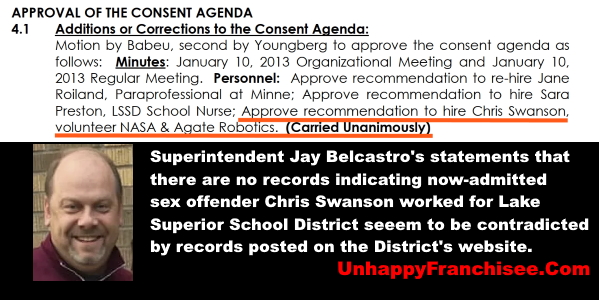 The 2002 Two Harbors High School Yearbook (“Nor Easter”) includes a photograph on the page titled “Boys and Girls Soccer” that includes a picture of Chris Swanson and the caption “Coach Chris Swanson.”

Question for Mr. Belcastro:  Can you explain this contradiction? 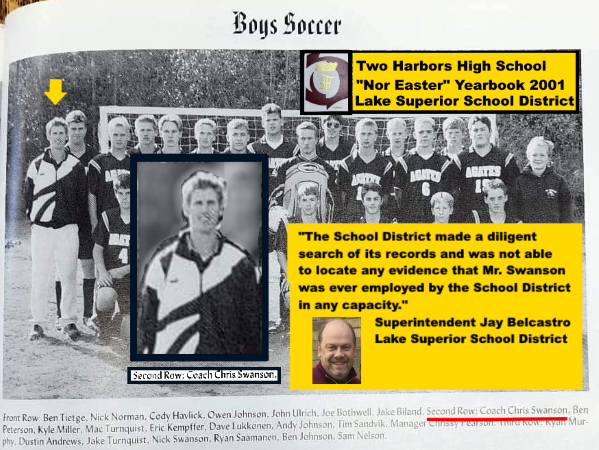 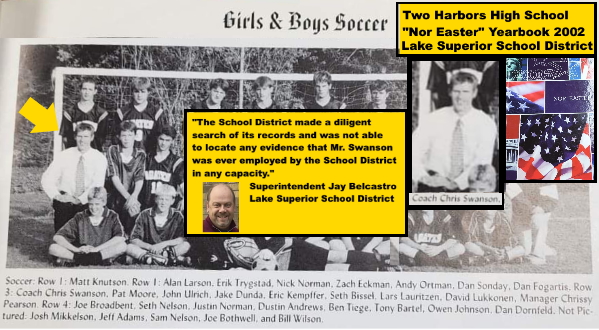 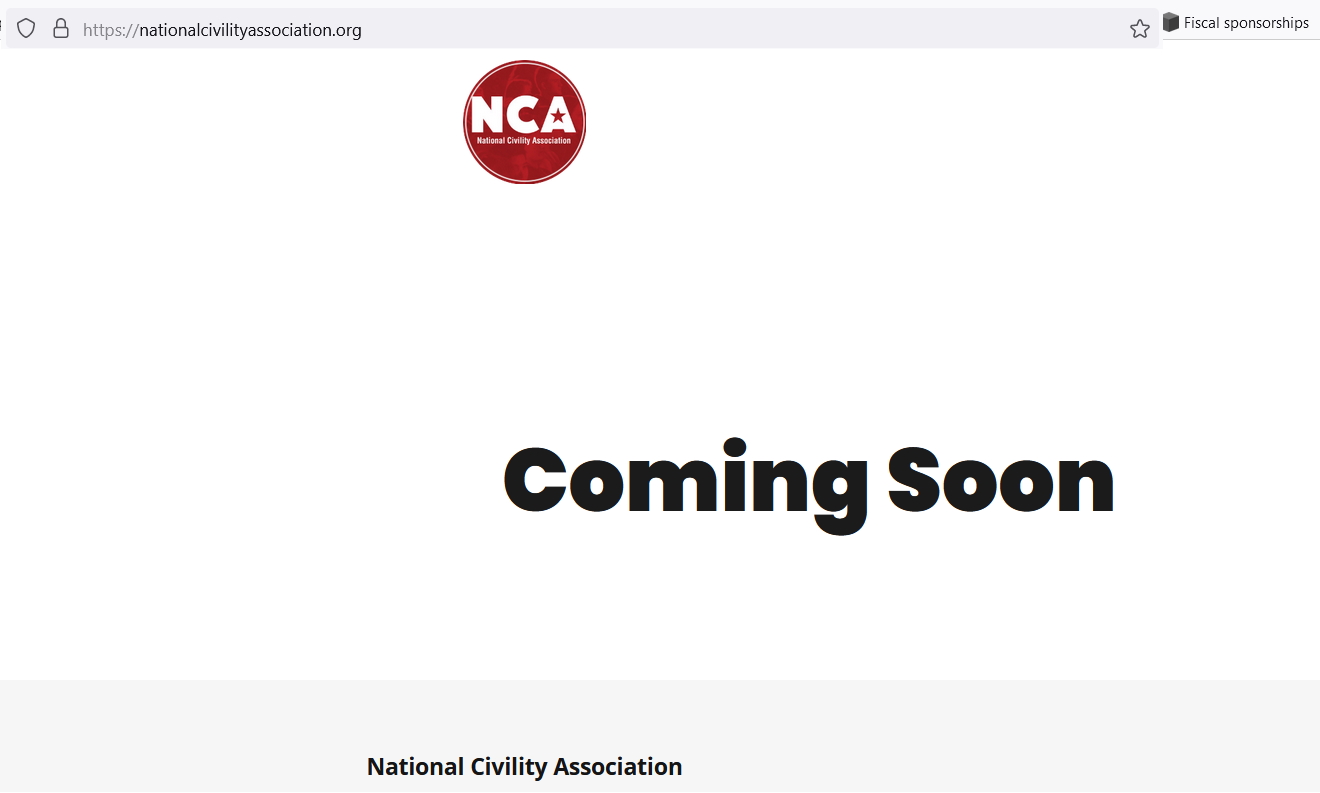 Question for Superintendent Belcastro:  Will Chris Swanson continue to be invited into Lake Superior School District schools as part of the NCA, and to work shoulder-to-shoulder with students?  Is your National Civility Association still active?  Or is it being closed permanently?

I have written to Superintendent Belcastro with these questions as well as an invitation for any corrections, clarifications, explanation, rebuttals of other statements he or the School District which to make.

His response will be published when received.

Read the Index of our Two Harbors posts here:

Silence Is Abuse: Sister of Abuse Survivor Refuses to be Silenced by Cowardly Mayor & City Council*

*Warning: These videos contains content that could be triggering or distressing to sexual trauma survivors

On the lighter side: