A franchise that enables its franchisees to

2) sell franchises and get commissions on the franchises they sell, and

3) receive an equity stake in a portfolio of client companies

It’s called Franchise Tank, an as yet un-federally trademarked name that plays off the popular TV show Shark Tank.

Here’s one of the many ads currently running in multiple markets on Craig’s List: What if you were instrumental in assisting to start the NEXT BIG BURGER FRANCHISE, and you were also making a monthly royalty from EVERY FRANCHISE STORE they ever build! YOU CAN NOW BE PART OF THIS GREAT OPPORTUNITY, by investing in a FRANCHISE TANK franchise!

WE’RE “FRANCHISE TANK”, THE NATION’S TOP FRANCHISE INVESTMENT, CONSULTING & BROKER COMPANY. We are seeking an aggressive and dependable individual to grow your area.

THERE ARE MANY BUSINESSES IN YOUR STATE THAT WOULD LIKE TO KNOW MORE ABOUT FRANCHISING THEIR BUSINESS. We help businesses franchise their companies and assist them to sell their franchises! Often we come in as investors and charge just $20,000 and take 10 percent equity & 1 percent ROYALTY in their business and other times we come in as consultants and charge a flat $40,000 fee to create their Franchise Disclosure Documents (FDD) and make them legal to sell franchises in the usa.

WE PAY YOU 30 percent of the royalty we collect monthly PLUS 40% COMMISSION FROM EVERY business you bring us that we franchise ($8,000 TO $16,000 based on if they choose Plan A or Plan B, plus ROYALTIES & 10,000 SHARES in our sister business, FDG, which is a portfolio of ALL THE COMPANIES WE FRANCHISE AS EQUITY PARTNERS. So your shares increase in value as we grow!

Prospective franchisees have the right to know the background of the people they are considering signing a binding, long-term agreement with (The term of the Franchise Tank franchise agreement is 15 years).

The FTC Franchise Rule requires franchisors to provide, in its Franchise Disclosure Document (FDD), the 5-year work history of its management team (Item 2: Business Experience) and, among other things, any recent litigation and/or current injunctive or restrictive orders or decrees imposed on those listed in Item 2 by a governmental agency (Item 3: Litigation).

While we are neither franchise attorneys nor franchise regulators, it seems to us that the Franchise Tank FDD in Item 2 is not in compliance with the FTC disclosure requirements regarding the work history of and current governmental orders imposed on CEO Chris Daskalakis.

The only person disclosed in Item 2 of the Franchise Tank FDD is Chris Daskalakis.  Instead of the FTC-mandated work history of 5 years, Franchise Tank lists 10 years of positions with now-defunct companies seemingly unrelated to his franchising activities:

Notably missing are ownership positions he’s held in the past 5 years directly related to the sale of franchises and business opportunities.

While we are not sure of the accuracy of some of these exact dates and positions (especially in relation to NRPG, Nika and Clean Fry), corporation filings in Florida and Wyoming indicate that relevant positions Mr. Daskalakis has held in the previous 5 years (but are not disclosed in the Franchise Tank FDD) might include:

Related question:  As attorney Harold Kestenbaum’s client list is used in Franchise Tank marketing and Mr. Kestenbaum will play a major role in the production of core work product, shouldn’t he be disclosed in Item 2?

According to the FTC, in Item 3 of the FDD “The franchisor must disclose whether… any person identified in Item 2 is subject to a currently effective injunctive or restrictive order or decree resulting from a pending or concluded action brought by a governmental agency.”  The Franchise Tank Item 3 discloses no such actions or litigation:

No litigation is required to be disclosed in this Disclosure Document.

We are neither attorneys nor regulators, and we could be wrong, but it seems likely that one or more of these enforcement actions would be a required disclosure item:

In addition, in the Chris Daskalakis’ Assurance of Voluntary Compliance, Daskalakis agrees not to sell any franchise or business opportunity in Florida without first submitting it for review and receiving approval for from the Florida Attorney General.  It appears that the Franchise Tank franchise is possibly being promoted in Florida in violation of this agreement.

Questions for Franchise Tank and its attorneys:  Aren’t some or all of these orders required Item 3 disclosures?  why are they not included in the Franchise Tank FDD?

Has the Florida Attorney General reviewed and approved Franchise Tank franchises for sale in Florida?  What about Clean Fry?

WE PAY YOU A 40% COMMISSION FROM EVERY SALE ($8,000 TO $16,000 based on if they choose Plan A or Plan B, plus ROYALTIES & 10,000 SHARES in our sister company which is a portfolio of ALL THE COMPANIES WE FRANCHISE AS EQUITY PARTNERS. So your shares increase in value as we grow!

WE ALSO GIVE YOU THE 10,000 SHARES OF FDG ONCE YOU BUY THE FRANCHISE… SO WE ARE BOTH VESTED IN EACH OTHER TO SUCCEED! … This is accomplished through 10,000 shares that we offer you as soon as you buy the franchise… You will own a piece of the portfolio of ALL THE COMPANIES WE FRANCHISE AS EQUITY PARTNERS.

When you buy a Franchise Tank franchise, we automatically give you 10,000 SHARESOF THE FRANCHISE DEVELOPMENT CLUB (FDC), which is a portfolio of all the companies we franchise as equity partners!

SO YOUR SHARES GROW WHEN ANYONE MAKES A SALE!!! THAT’S YOUR NEST EGG!!!

We are the ONLY franchise that actually GIVES YOU SHARES in the portfolio of ALL the companies we franchise as equity partners!

Yet the Franchise Tank FDD has no mention of a “Franchise Development Club” or other “Sister” company:

We have no parent, predecessors, or affiliates at this time.

The Franchise Tank FDD given to a prospective franchisee recently seems to directly contradict the promise of an equity share of the companies they franchise:

You do not receive any equity shares from companies that we franchise as equity partners.

Only the terms of the Franchise Agreement are binding (subject to state law). Any other promises may not be enforceable

Red Flag #4  Questions About Experience/Competence/Honesty of the Franchisor

Yet the Franchise Tank franchise disclosure document makes no mention of any franchise development experience by its principals.  It states:

We do not own or operate a Business of the type being franchised.

We do not offer franchises in any other line of business except for our affiliate franchise, Clean Fry…

We have no parent, predecessors, or affiliates at this time…

How could Franchise Tank be considered a the nation’s “top franchise investment, consulting, & broker company” when it claims that it has no prior experience in franchise investing, development or brokerage?

How can Franchise Tank claim to be experts in putting together franchise programs at all when their own legal documents and advertising claims seems to be problematic (to put it mildly)?

Is Franchise Tank’s claim true that it is  “a unique firm made up of franchise attorneys, architects, general contractors, brokers and franchisors all under one roof.”

Does Franchise Tank really have 34 independent sales reps (first names and cities are listed on the site)?  If so, why do they have the same phone number but no extensions or voice mail numbers?

Despite the Red Flags, we are keeping an open mind about the Franchise Tank franchise opportunity and suggest our readers do to.

We are sending these questions to Chris Daskalakis and Franchise Tank franchise attorney Harold Kestenbaum with an invitation to provide corrections, clarifications, rebuttals and/or updates… which we will publish.

Chris Daskalakis Name Change to Chris Matthews: Should it be Approved? 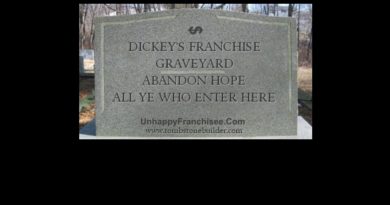