Google the name “Chris Daskalakis” or the phrase “Chris Daskalakis franchise” and you’ll likely see a firestorm of angry comments, complaints and court actions on such sites as RipoffReport, Pissed Consumer & UnhappyFranchisee regarding his past franchise and business opportunity investments schemes.   Daskalakis is allegedly trying to hide his controversial past by legally changing his name to “Chris Matthews.”  Will his detractors let that happen? When asked about the dual names by confused associates, Daskalakis allegedly claims that he’s changing his names because people have trouble pronouncing his Greek surname.

We suspect it has more to do with his names’ associations with many failed or abandoned franchise and business opportunities, including  Zooglalist, Mr. Oil Saver and Mr. Fire Safety.

We suspect it may be an attempt to hide the citations and enforcement orders from several states, including:

If you would like to contact the Volusia County Family Court to voice your support or opposition to Chris Dasklakis’ petition to legally change his name to Chris Matthews, you may inquire here:

Each petition shall be verified and show:

Whether the petitioner has ever been adjudicated a bankrupt and if so, where and when.

Whether any money judgment has ever been entered against the petitioner and if so, the name of the judgment creditor, the amount and date thereof, the court by which entered, and whether the judgment has been satisfied.

That the petition is filed for no ulterior or illegal purpose and granting it will not in any manner invade the property rights of others, whether partnership, patent, good will, privacy, trademark, or otherwise.

Petitioner’s occupation?  If Chris Daskalaskis submits truthful information about all the businesses he’s owned in the last 5 years, that should raise red flags.

Ulterior or Illegal Purpose?  A point could be made that the main purpose of the Daskalakis’ name change is to circumvent the FTC Franchise Rule, which states that a franchisor’s prior work history and history of litigation, violations and enforcement orders should be disclosed to prospective franchisees.

If his detractors are right and Chris Daskalakis is seeking to hide from past and future misdeeds, “Chris Matthews” would be a brilliant choice.

Any use of his new name would likely be overwhelmed in Google searches by references to the famous American political commentator, author and host of a nightly MSNBC talk show, Hardball with Chris Matthews.

[Image, Left:  We don’t mean to question whether Mr. Daskalakis really attended “Rutckers,” or that he graduated in 1983… but wouldn’t he have seen the correct spelling of the school name on a sign, on buildings, sweatshirts… or something?]

ARE YOU FAMILIAR WITH CHRIS DASKALAKIS?  SHOULD HE BE ALLOWED TO CHANGE HIS NAME TO CHRIS MATTHEWS?  SHARE A COMMENT BELOW. 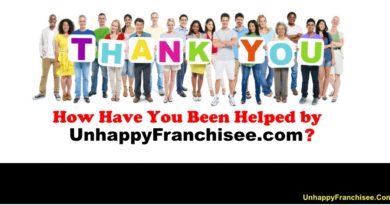