The American Arbitration Association (AAA), International Franchise Association (IFA), American Bar Association (ABA) and the Save the NDA! Foundation (STNDA!F) are furiously condemning the leak of a confidential franchise arbitration teleconference.  The leaked image and transcript below give a glimpse behind the curtain of a super-secret arbitration presided over by franchisor attorney, NASAA advisor, arbitrator, author of the NY Franchise Act and legal guardian of former franchisee Jim Lager, David Kaufmann of New York’s Kaufmann, Gildin & Robbins, LLP law firm.  A parody (non-actionable) by Sean Kelly 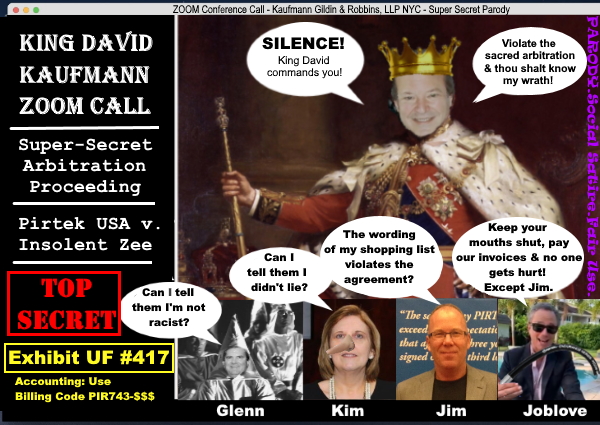 Unhappy Franchisee has received this unauthorized screen shot and transcript from an anonymous source.

Call commenced.  King David Kaufmann instructed attorneys to set billing start time at 12:00 and with Billing Code PIR743-$$$.  He reminded all to be diligent about restricting billing to actual time worked (laughter)

Kaufmann wanted it on the record that this was because she is not a sworn party and not because she is black and therefore likely a prostitute.  Noted.

Kim Gubera again raised the contention that being able to afford prostitutes was a key indicator of underpaying royalties. Noted.

Glenn Duncan (removes hood):  “They are saying I’m a racist, mate.  Can I tell them I’m not racist?  One time, I even let Brad Kesolowski race with a black paint scheme.”

King David:  “No!  Do not respond nor dispel any negative public allegations.  The longer damaging content is public, the higher the damages I can award later!”

Kim Gubera:  “Unhappy Franchisee publicly asked about false & defamatory comments I made.  If I don’t respond, I’ll look arrogant.  Or cowardly.  Or guilty.  Can I apologize?”

Kim Gubera:  “They asked if spending the franchisees’ marketing money on stupid NASCAR provides any measurable benefit whatsoever.  Can I tell them about our ride on Roger Penske’s speedboat?”

Kim Gubera:  “They are implying that I lied when I said we had no failed franchisees just because we disclosed failed franchisees in our stupid FDD!  And they’re asking about the NY franchisee who disappeared!  Can I tell them alien abductions & spontaneous combustions aren’t failures?”

King David:  “No!  Let me be clear.  Do NOT respond to anything publicly, whether it’s true or false.  Do not dispute public contentions regarding lack of diversity, racism, misrepresentation, lying, bullying, unfairness, discrimination against franchisees with non-white prostitute girlfriends, or contentions that franchisors and arbitrators should be fair & impartial. ”

Franchisee Jim Lager:  “May I…”

King David:   “Silence!  Franchisees are to pay and not heard!”

King David:  “I hate to think about the chaos that would reign if franchisees and franchisors were free to discuss their opinions out in the open, in the Court of Public Opinion!  Prospective franchisees would hear both sides and be able to make up their minds!  Without the Sacred Confidentiality of Arbitration, non-disparagement, gag orders and NDAs, franchisors would have to think before doing terrible things!  In some cases, they might be forced not do them!

“No, we have come too far, worked too hard to circumvent The Franchise Rule and the burdensome laws that hamper TRULY regulated industries…  We have built Franchising into the Golden Path to the American Dream… Where every mobile dog wash, paint-and-sip franchise or charcuterie store succeeds! Where no one fails except those who don’t follow the system or whiners who open their big yaps!  We cannot let the truth leak out and ruin everything we’ve built!

King David:  “Enough!  The franchisee is ordered off the call and to be gagged and shackled.  Kim, how soon can we get leg irons delivered?”

Kim Gubera, checking her phone:  “10 am tomorrow if I order in the next 30 minutes.  And that’s free shipping with Amazon PRIME!”

King David:   “King David has spoken!  I shall not let franchising descend into the chaos of free speech, candid open discussion and non-billable conflict resolution!  All who defy me will face my wrath and feel the sting of my tort!”