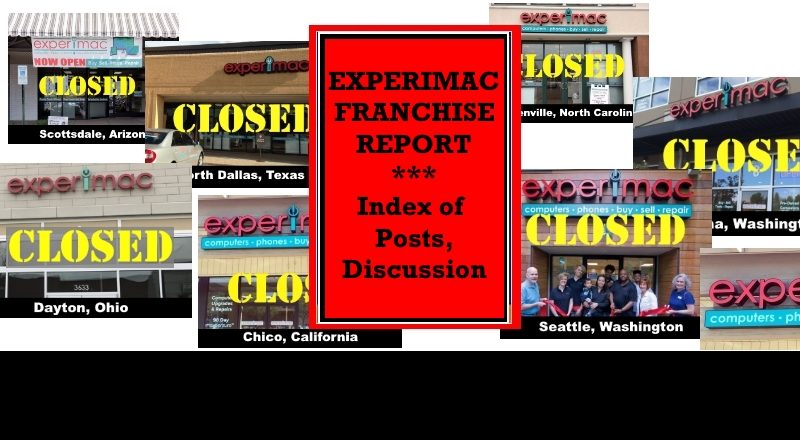 (UnhappyFranchisee.Com)  Thanks to all who support our search for the truth behind the hype regarding the Experimac franchise and the Franchise Funding Trap set by United Franchise Group and its 3rd party associates.

57% of the Experimac stores on a recent SBA-guaranteed loan list have closed.  Paul Bosely of Business Funding Depot explains how his unique relationships with Celtic Bank, SBA Express Loan, and equipment lease companies enabled him to plunge UFG franchisees deep into debt in a matter of weeks.

Posts about the Experimac Franchise Opportunity:

EXPERIMAC Franchise: Who Benefits from Failed Franchises?:  Why aren’t United Franchise Group (UFG), Experimac Franchising LLC, CEO Ray Titus and President Jim Muir halting Experimac franchise sales and fixing whatever is causing the rising franchise failures?  Could it be that they’re making too much money off of failed stores?

EXPERIMAC Franchise Closed Store List:  The Experimac website only lists 96 stores currently open.  Our participatory and continuously updated list of closed and transferred Experimac franchise stores indicates that 54 franchise stores have closed, been reacquired or transferred to new owners.  We list them here, with links to many of their YELP closure notices.

EXPERIMAC Franchise Complaints :  Here are the initial complaints we received from Experimac franchise owners, and the franchisee turnover rate disclosed by Experimac Franchising LLC and United Franchise Group.  Your comments are invited.

Dr. John Hayes is a paid pitchman for United Franchise Group (UFG) and is the “Titus Chair” of the UFG-funded franchise studies program at Palm Beach Atlantic University.