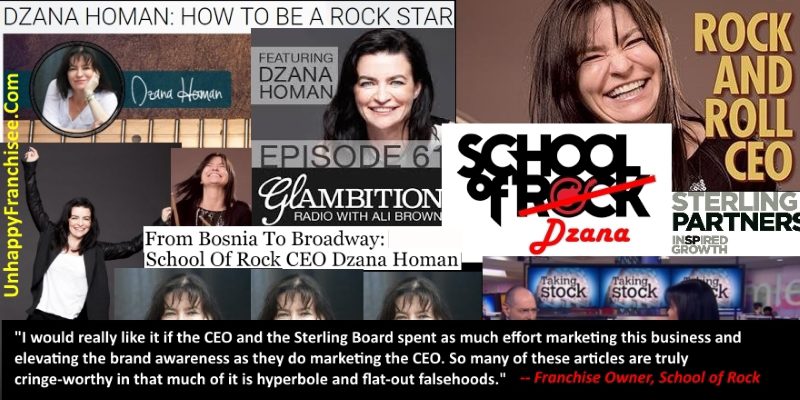 School of Rock franchise owners are growing increasingly angry as CEO Dzana Homan dismisses and trivializes their concerns in an email some have called “delusional.”   They are also growing frustrated with the lack of response and intervention by parent Sterling Partners despite complaints of bizarre, disturbing and potentially illegal speech and actions by Ms. Homan.  UnhappyFranchisee.Com invites Dzana Homan to share her side of the story – and to address some tough questions prompted by recent allegations.

The controversy has gained momentum as increasing numbers of School of Rock franchise owners (anonymously – for fear of retaliation) appeal to private equity owner Sterling Partners to intervene.

We have posted an index/overview here:  SCHOOL OF ROCK Franchise, Sterling Partners Controversy: It’s All About Dzana (Topic Index)

Our initial post and subsequent complaints can be read here:  SCHOOL OF ROCK Franchise Complaints

We then grouped the increasing number of complaints (preminantly about Dzana Homan) here:  Is Dzana Homan an Abusive CEO? School of Rock, Sterling Partners Controversy Grows

Despite repeated invitations, Ms. Homan has not responded to us directly.  She sent an email to franchisees basically denying that there is a problem and defending her track record:  SCHOOL OF ROCK Dzana Homan Responds to Franchise Complaints

The allegations have become increasingly serious and grown to include claims that Ms. Homan makes racist, discriminatory and homophobic statements, that she is psychologically unstable and prone to angry outbursts, and that franchisees and corporate staff live in fear of incurring her petty and vindictive wrath.  Further, several franchisees have challenged the claims she made in her defiant email as blatantly untrue.

The complaints and allegations against Dzana Homan are serious, but remain just allegations and opinions.  We continue to invite Ms. Homan to address these claims and allegations, and will provide her with every opportunity to refute, disprove or disclaim any statements of fact or opinion she believes are false.  It is our policy to publish rebuttals and corrections with the same prominence as the original complaints.

Last night, we emailed this message to School of Rock CEO Dzana Homan and copied her assistant to make doubly sure she received it.

This week, UnhappyFranchisee.Com will be continuing to cover the growing number of franchisee complaints about your leadership, management and alleged behavior.

A growing number of these franchisees are calling for Sterling Partners to provide new leadership.

I know you attempted to dismiss the complaints as that of a handful of disgruntled franchisees, but we can assure you that we have been contacted by a significant number of franchisees from all different regions and tenure as franchisees.

We understand the serious nature of these allegations for you and want to give you every chance to refute, rebut or deny the allegations if untrue, and explain, clarify and/or apologize if they ARE true.

Excuse the bluntness of the following questions but we want to give you every chance to address them without beating around the bush or mincing words.

Franchisees and possibly employees have stated that you are prone to sudden angry outbursts.  Some have said that you suffered some sort of anxiety attack at the latest franchise convention and had to be helped off the stage.

Regarding statements you made in your email to franchisees:

You stated, “I instituted a monthly CEO Call – a meeting where I was alone with the owners and allowed for Q&A.”

A franchisee stated that these calls were frequently cancelled and that you haven’t had  a “monthly CEO call” since August, 2016.  Is this true?  If not, when was your latest call?

You stated:  “we have added two Corporate Music Directors whose sole job is to advise the system on music-related programs.”

A franchisee has challenged your statement, saying “these are two people who work full time in corporate schools as Music Directors. They answer questions on a help desk part time for a network of 200 schools.”

Can you please support your statement by naming the two corporate music directors who work solely on music-related programs for the system?

You stated “During my tenure, we added a number of new channels to solicit system feedback including creating Innovation Teams for core departments: Operation, Marketing, Events, Education and AllStars.”

A franchisee has stated “The Innovation Teams of which she speaks were virtually non-existent in that they didn’t last very long and were left to sit idle… Instead, they were shut down and Ms. Homan took whatever actions she wanted.”

Is it true that the Innovation Teams you cited in your email “were shut down” and are no longer active?

In your email, you state “I am a little dismayed that an owner felt s/he had no other choice than to go to an external party to voice frustrations. As a CEO, I am here to serve each of you and look forward to continuing dialogue…”

It IS unfortunate that franchisees do not feel that you are willing to engage them in respectful dialogue, and feel the need to communicate anonymously through a third-party website for fear of repercussions.

However, Ms. Homan, that appears to be the reality of the situation.  Perhaps if you participate in this discussion by responding to our questions openly and honestly, you can restore the confidence needed to one-day conduct such discussions within your system.

We know that there are a lot of questions here, but we encourage you to accept the fact that this discussion is not going to go away, and these serious allegations cannot be spun or dismissed with unsupported statements.

We write in the hope that you will address these issues openly and honestly.

We want to give you every opportunity to defend yourself and your professional reputation.

At the same time, we hope that you’ll acknowledge that without the investment of time, money and passion of the franchise owners who built the schools and serve their communities day in and day out all year long, the School of Rock system would not exist as it does today.

The franchise owners – not you and not Sterling Capital – built the School of Rock.

The least you could do is address their complaints openly and honestly.

DISCLAIMER & INVITATION:  Views and statements are those of the comment authors and do not necessarily reflect the views of Unhappy Franchisee or its staff.  We don’t know Dzana Homan and have no inside knowledge of the School of Rock.  Anonymous allegations should be seen as a starting point for independent inquiry and decuction.  Unhappy Franchisee provides a forum for all sides of this issue to state their opinions and debate the facts.  We extend an open invitation to CEO Dzana Homan, School of Rock executives, Sterling Partners, franchise owners, and staff for comments, corrections, clarifications, affirmations and/or rebuttals.  UnhappyFranchisee.Com has no special relationship with any franchise or related company and has no hidden agenda or ulterior motive in its reporting.  Please comment below or email us in confidence at UnhappyFranchisee[at]Gmail.Com.