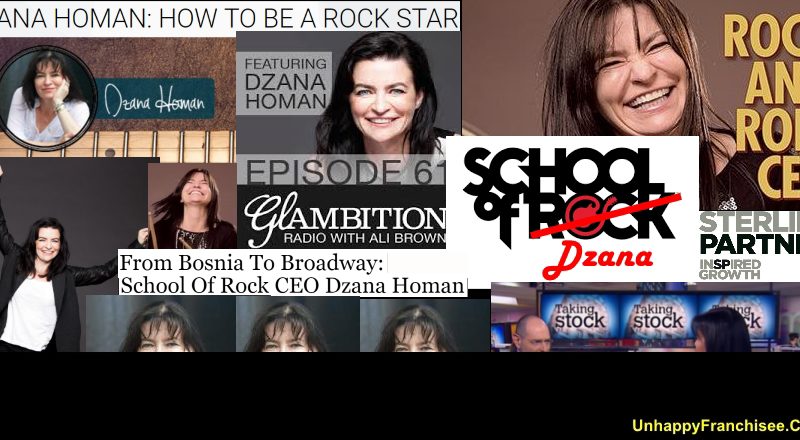 If one wished to hire professionals to create a real life case study on how NOT to handle public criticism, one could likely find no better Dream Team than Sterling Partners’ Rick Elfman, School of Rock CEO Dzana Homan, and Fox Rothschild attorney Craig Tractenberg.  School of Rock franchise owners claim that they are threatened and bullied by School of Rock management.  When UnhappyFranchisee.Com published the complaints and reached out to private equity parent Sterling Partners, the website publisher became the target of this company’s bullying and intimidation tactics.

(UnhappyFranchisee.Com)   Here is the timeline, overview, and index of links to the fast-moving School of Rock, Sterling Partners controversy.

Timeline of the School of Rock, Sterling Partners Franchise Controversy

Here’s a quick timeline as of 6/14/17.  Corresponding links & detailed overview follow below:

Friday  5/26/17 – We published the defiant email Dzana Homan sent to franchisees the previous day.  Homan denied that there is a problem and dismissed the complaints as being from a single franchisee or handful of franchisees.  We disputed some of the assertions she made in her email and assured readers that we had heard from a significant number of franchisees.  We again contacted School of Rock and Sterling Partners to engage in the dialogue on UnhappyFranchisee.Com

Monday 5/29/17 – We emailed a list of 13 Questions to CEO Dzana Homan to give her a chance to address the most serious and disturbing allegations.  We copied her assistant (as always) to make sure she received them and had a chance to respond.  We received no response or acknowledgement.

Tuesday 5/30/17 – We published our emailed message to CEO Dzana Homan.  We invited Sterling Partners executives including managing partner Rick Elfman to respond.  Franchisees reported that a scheduled call between Homan and franchisees was cancelled due to senior management being in an “urgent meeting.”

Tuesday 6/6/17 – UF Publisher Sean Kelly receives a threatening phone call from attorney and Fox Rothschild partner Craig Tractenberg.  Tractenberg states that he represents School of Rock & Dzana Homan and demands that all complaints & content regarding SoR be removed from UnhappyFranchisee.Com.  Tractenberg states that they have uncovered much damaging information on Kelly including financial, bankruptcy, litigation and divorce records that will be made public if Tractenberg’s demands aren’t met.  In addition to smearing his reputation, he threatens to crush Kelly under a massive lawsuit.

Friday  6/9/17 – Kelly sent an open letter (by email and publication) to Sterling Partners’ Rick Elfman informing him that he will not give in to the illegal and unethical threats made to him by Attorney Craig Tractenberg.  Kelly promised a very strong and public response to further aggression by his company.  Kelly wanted to give Sterling Partners every opportunity to withdraw its threat and apologize.  Again, no response.

Tuesday 6/13/17 – Kelly wonders if Tractenburg’s been nursing a grudge since 2014 when he rebuffed the attorney’s threats on behalf of his tax-cheating client Nick Papanier, Sr. of Primohoagies.  Kelly also wonders if Tractenburg’s threat to release his divorce records (Kelly’s never been divorced) Tractenberg’s threat of releasing divorce records (when Kelly’s never been divorced) might indicate that the Super Lawyer dug up dirt on the wrong Sean Kelly.

Wednesday 6/14/17 – UF Publisher Sean Kelly files a formal complaint against Fox Rothschild attorney Craig Tractenberg with The Disciplinary Board of the Supreme Court of Pennsylvania.

Rob Price has been named the new CEO of School of Rock effective July 7, 2017.  According to SoR Chairman of the Board David Zucker, Dzana Homan will be pursuing “other opportunities” after her last day on June 30, 2017.

We have established this page as a chronological index of posts concerning this growing and significant controversy. We plan to update this page as the controversy unfolds, and add links to it as more is learned and more posts are published. If the franchisee complaints are true and valid, we hope to report in the future that Dzana Homan and/or School of Rock parent Sterling Partners were proactive and transparent in remedying the situation and protecting their franchisee’s investments. If the franchisee complaints are proven invalid, we will be happy to report that Ms. Dzana Homan was treated unfairly and has been exonerated. Please share your views and insights on this and/or other discussion pages.

DISCLAIMER & INVITATION:  Views and statements are those of the comment authors and do not necessarily reflect Unhappy Franchisee or its staff.   Unhappy Franchisee provides a forum for all sides of this issue to state their opinions and debate the facts.  We extend an open invitation to CEO Dzana Homan, School of Rock executives, Sterling Partners, franchise owners, and staff for comments, corrections, clarifications, affirmations and/or rebuttals.  Please comment below or email us in confidence at UnhappyFranchisee[at]Gmail.Com.