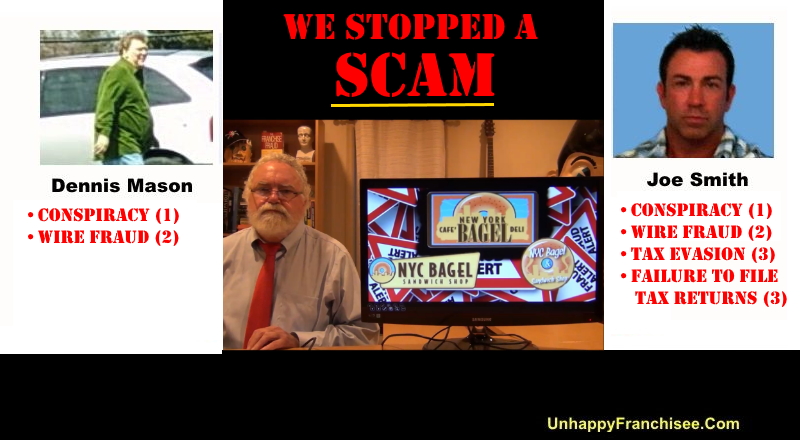 (UnhappyFranchisee.Com)  Since we began posting warnings about the unscrupulous franchise seller Dennis Mason (aka ) back in July, 2012, our public reporting and appeals to regulators and law enforcement agencies resulted in numerous state investigations, three official state enforcement actions, and fines in excess of $1,000,000 against the perpetrators of the NY Bagel franchise scam Joseph Smith & Dennis Mason (aka Brian Scofield, aka Keith Samuel). 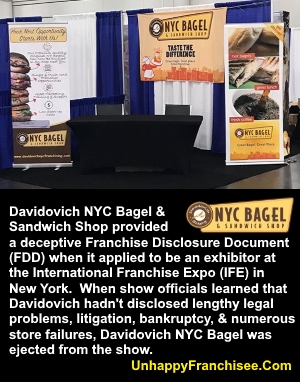 Minor victories along the way included convincing several legitimate real estate and finance companies to drop them as clients, getting their Florida accomplice fired from his finance position, and getting  Davidovitch NYC Bagel very publicly ejected halfway through the MFV Franchise Expo in New York.

During the course of my campaign to end the NY Bagel scam, I had to fend off personal and professional attacks against both me and my family members, including defamatory email campaigns and libelous attack websites (some of which still remain visible).

However, cooperating NY Bagel victims and I were relentless in our efforts.  Eventually,  until a second FBI commenced and, despite frustrating periods of silence, resulted in Department of Justice Charges first against Dennis Mason and later, Joseph Smith.

Despite all that, I am hopeful it will all be worth it when, on November 22, 2021 at 9:30 in Courtroom 11-A in the Federal Courthouse in Philadelphia, Joseph Smith will face federal criminal charges for:

Dennis Mason has been charged separately and has struck a plea deal.  His sentencing has been delayed, perhaps until Joe Smith’s trial is completed.  His charges, so far, include: 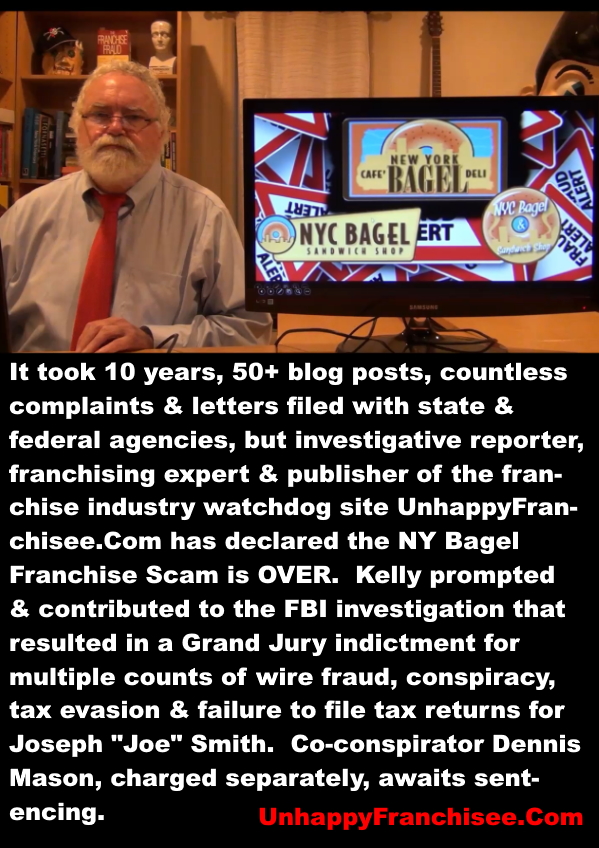 According the Grand Jury Superceding Indictment of Joseph Smith:

3. Starting as early as 2008, Dennis Mason sold New York Bagel franchises on behalf of defendant JOSEPH SMITH.  Dennis Mason provided information to prospective franchisees about among other things, the cost to open a franchise, the availability of financing, and the profits made by existing franchises.

4. The fee that prospective franchisees paid to New York Bagel ranged between $7,500 and $44,500. Defendant JOSEPH SMITH shared a percentage of these franchise fees with Dennis Mason.

6. From in or about 2008 through on or about July 25, 2018, in the Eastem District of Pennsylvania and elsewhere, defendant … with Dennis Mason, and other persons unknown… knowingly executing and attempting to execute a scheme to defraud prospective franchisees and to obtain money and property by means of false and fraudulent pretenses, representations, and promises…

The superceding indictment lays out the same claims

8.  Made material misrepresentations to prospective franchisees about the profitability of the franchise.

Thanks to the Victims Who Came Forward, The FBI, The Department of Justice, The Unhappy Franchisee Blog, the NY Bagel Scam is Over

It took nearly a decade and a lot of hard and frustrating work, but Joseph Smith & Dennis Mason have been exposed and their scam ads no longer appear on Craig’s List or elsewhere.

No matter what the trial outcome, the scam has been exposed and with it the problems in our system that let it go on for so long.

HERBALIFE Is Herbalife a Pyramid Scam?