Dan Olsen claims to be a franchise guru who has created billion dollar franchise companies.  A local volunteer and sports coach. A success mentor who just wants to  give back.  A recent arbitration ruling exposing Olsen’s fraudulent practices in selling the RX2Live franchise may add Liar & Fraudster to the list.    Part of the VetFran Veteran’s Initiative @ UnhappyFranchisee.Com

A longtime, prominent figure in the Franchise Dream-selling industry, Dan Olsen has credibility & sincerity down to a science.

In recent years, he has bolstered that image with an endorsement by and alliance with the As-Seen-On-TV gadget pitchman &  Shark Tank star Kevin Harrington. 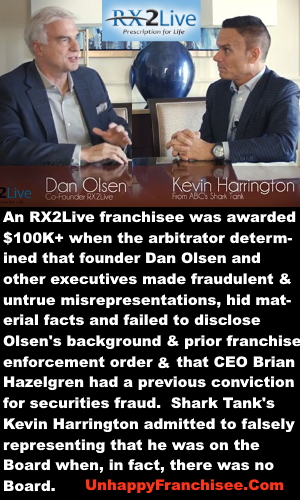 According to the arbitrator of the franchise dispute RX2NAPLES, LLC; LESLIE DEAN; and MELVIN DRURY vs. RX2LIVE, INC., DALLAS BALDRI; ERIC FOSTER; GARRETT BLOOD; BRIAN HAZELGREN; RICHARD SCOTT, DAN OLSEN; and RX2LIVE, LLC, the only thing real about Dan Olsen’s pitch for the Rx2Live franchise was that it was really deceptive, really fraudulent and real unlawful.

It also wasn’t real bright, as the franchisee they deceived was a battle-tested attorney, Leslie Dean (Dean Law, VeteranAppeals.org), and her CPA husband Melvin Drury – a couple willing and able to fight back.

[Then again, RX2Live’s alleged decision to capitalize on the COVID-19 pandemic with a fraudulent, price-gouging and 3M N95 respirator counterfeiting scheme wasn’t too bright either.]

According to the petition, Dan Olsen “has never been an officer of RX2Live, but is the leader and motivational force behind RX2Live and had significant management responsibility.”

Despite the significant role Dan Olsen played in the Rx2Live franchise organization, he and his work history were not disclosed, as required, in Item 2 of the Franchise Disclosure Document (FDD).

According to the Arbitrator’s decision,

“RX2Live, Mr. Olsen, Mr. Scott and Mr. Hazelgren were responsible for concealing the material fact that Mr. Olsen’s previous company, Franchise Growth Systems, took a multi-million dollar judgment in Nevada. This Nevada judgment from 2016 should have been disclosed in the FDD but was not….

“RX2Live, Mr. Olsen, Mr. Scott and Mr. Hazelgren were responsible for concealing the material fact that Mr. Olsen and Franchise Growth Systems were cited in 2015 by the Department of Business Oversight for the state of California for offering and selling unregistered franchises, making untrue statements of material fact to franchisees and making untrue statements to the Commissioner with the intent to impede, obstruct and influence. Mr. Olsen and Franchise Growth Systems were both fined and issued a cease and desist letter. Given Mr. Olsen’s deep day to day involvement in RX2Live, the California Citation and Cease and Desist Order should have been disclosed in the FDD.

“…Mr. Hazelgren becoming Chief Executive Officer was material because he had a conviction for securities fraud.”

Those false statements include:

“…that RX2Live was in a 1/2 trillion dollar industry when RX2Live and its franchisees had not materially entered the healthcare industry.

“… that the franchise system was turnkey when it was far from it and when its only marginally successful franchisee, the Campbells, while making some revenues, were barely profitable. In fact, Ms. Campbell testified that she and her husband were inventing procedures and best practices on the fly with no help from the franchisor.

“…that franchisee overhead would be negligible because the franchisee’s sales force could be comprised of 1099 employees, including physicians, when applicable government regulations required that Medicare or Medicaid monies earned as a result of services offered by affiliated physicians be paid only to W2 employees.

“… that the services offered by franchisees were in high demand among physicians when they were not and, in particular, when their own franchise could not make any meaningful sales to physicians. Indeed, Mr. Foster and Mr. Baldri have abandoned their franchise.

“…that exclusive features of being an RX2Live franchisee would be ‘immediate income generation’ and low risk.”

RX2Live, Inc., RX2Live, LLC, Dan Olsen, Eric Foster, Richard Scott, Brian Hazelgren and Dallas Baldri are jointly and severally liable to RX2Naples in the amount of $78,401.73 for breach of contract, violation of the Little FTC Act and fraud.

The total amount of the award is, accordingly, $105,238.74, to be paid jointly and severally by RX2Live, Inc., RX2Live, LLC, Dan Olsen, Eric Foster, Richard Scott, Brian Hazelgren and Dallas Baldri.

NOTE:  All individuals and companies mentioned on Unhappy Franchisee are invited to share corrections, clarifications, rebuttals or statements for publication.  We welcome open and respectful dialogue & the public exchange of ideas.  Email us at unhappyfranchisee [at]gmail [dot] com

ARE YOU FAMILIAR WITH RX2LIVE, DAN OLSEN, KEVIN HARRINGTON, BRIAN HAZELGREN OR THE OTHERS? SHARE A COMMENT BELOW OR EMAIL IN CONFIDENCE TO UNHAPPYFRANCHISEE [AT] GMAIL [DOT] COM. 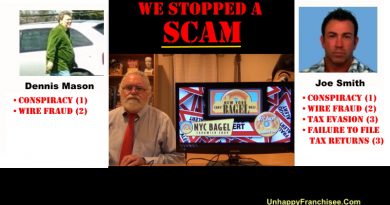