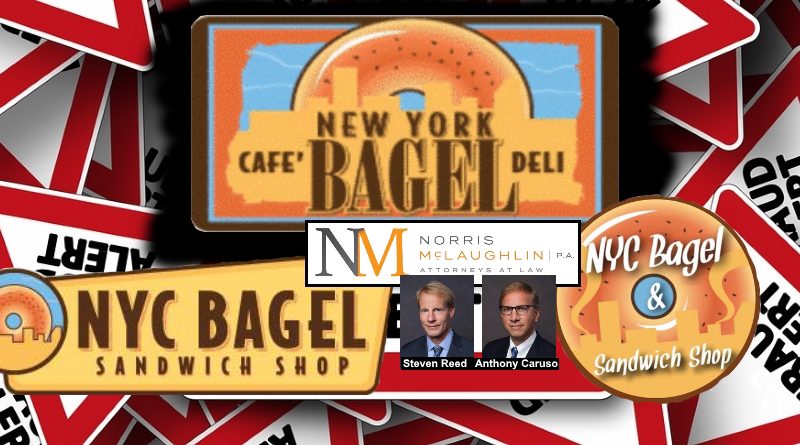 According to documents shared by an undisclosed source, Steven J. Reed and Anthony Caruso have filed a demand for arbitration with the American Arbitration Association against a victim of the NY Bagel Scam.

The demand specified monetary damages of $50,000 as well as additional non-monetary relief, including declaratory relief.

The victim is a widowed woman who answered a Craig’s List ad for a NY Bagel Cafe franchise opportunity.

A smooth-talking franchise salesman, who identified himself as “Brian Scofield,” convinced the woman to fedex a check for $27,500 to a mail drop in Whitehouse Station, New Jersey.

Some time after sending her check (but before opening her store), she learned some disturbing things about NYC Bagel Sandwich Shop, CEO Joe Smith, and Brian Scofield.

The victim’s attorney notified Joe Smith that they were now aware of his fraudulent practices, and that her client would not be moving forward with the development of the NYC Bagel Shop franchise.

In an dazzling act of chutzpah, Joe Smith (assumedly) directed Norris McLaughlin to file the arbitration complaint with the American Arbitration Association (AAA).

Apparently, defrauding victims into sending them $27,500 under false pretenses is no longer good enough  for Joe Smith and the NYC Bagel Sandwich Shop gang.

They now want to create as much turmoil and extract every last dollar they can.

And apparently, attorneys like Steven Reed and Anthony Caruso are all to happy to help… likely for a percentage of the spoils.

A lawyer should conduct himself or herself with dignity and fairness and refrain from conduct meant to harass the opposing party. A lawyer should not advance groundless claims, defenses objections, arguments and positions.

UnhappyFranchisee.Com has sent a letter to Norris McLaughlin Chairman John Vanarthos, asking how he justifies what appears to be a groundless claim intended to harass and silence a scam victim.

…considering that SMS Franchise LLC could not have furnished the most basic legal requirement for the sale of a franchise (a valid Franchise Disclosure Document or FDD), do you believe that attorneys Steven J. Reed and Anthony Caruso had reasonable grounds for filing an arbitration demand against a scam victim?

“And if there weren’t sufficient grounds for this act of legal aggression, what other purpose could there have been other than a desire to harass and/or silence victims?

Is Norris McLaughlin’s role as victim harasser and intimidator a deliberate profit center (area of practice) for the firm, or an indication that attorneys like Steven J. Reed and Anthony Caruso are not required to do a modicum of due diligence (or independent thinking) before launching baseless litigation?

We will continue to reach out to Norris McLaughlin P.C. and attorneys Steven J. Reed and Anthony R. Caruso for clarification of their actions on behalf of NYC Bagel Sandwich Shop and the NY Bagel Scam, and whether they will continue this type of litigation in the future.