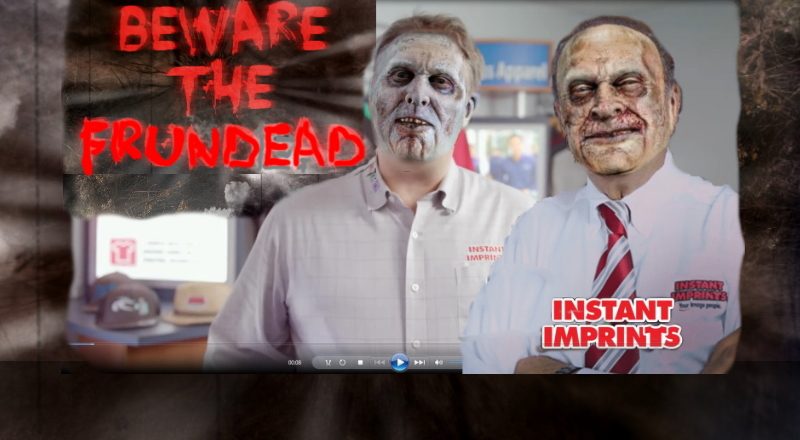 (UnhappyFranchisee.Com) Their names appear on the stark white page 192 of the Instant Imprint Franchise Disclosure Document (FDD) under the heading “Terminated or Ceased Operation.”

The BBB states they are “Out of Business.”

Yet the FRUNDEAD images of former franchisees Don & Chandra Keith seem destined to sip wine at the country club & praise the Instant Imprints franchisee lifestyle for all eternity in the company’s recruitment videos.

While her Fullerton, CA store, retirement savings and dream of building a business with her son have evaporated, the smiling FRUNDEAD apparition of Kathy Schneider lives on in multiple videos across the Internet, endorsing the franchise investment, the sketchy stock program and the Midas touch of CEO Ralph Askar.

Like some eerie late night horror movie, on the franchise sales website,  Rod & Christine Rosine repeatedly cut the Grand Opening ribbon on their San Marcos, CA Instant Imprints and will do so despite having lasted only one year and seven months.

These – and others like them – Are the FRUNDEADTM of the Instant Imprints franchise opportunity.

[NOTE:  We’ve compiled the information as diligently as we could from publicly available sources & anonymous tips.  We need your help to correct, clarify and add to this info.  Pls leave a comment below or email us in confidence at UnhappyFranchisee [at] Gmail [dot]com. This post is an ongoing work in progress.  Check back for updates.]

What Are the FrunDead of Franchising?

According to UnhappyFranchisee.Com publisher and franchise scholar (and the term originator) Sean Kelly, the FRUNDEADTM are:

Although they have closed, failed, transferred, sold their franchise, gone bankrupt, been terminated or otherwise departed the system, the franchisor continues to recruit new franchisees with their once-smiling likenesses and their outdated, often now-misleading endorsements.

The FRUNDEAD are often tortured souls unable to correct, update or withdraw their testimonials due to post-term non-disclosure agreements (NDAs) they had no choice but to sign.

We Found Most Instant Imprints Franchisee Testimonials Are No Longer Franchisees.

The Internet is chocked-full of video testimonials from supposedly happy and fulfilled Instant Imprint franchisees.

When we dug into company Franchise Disclosure Documents (FDDs), LinkedIn, Google & Yelp!, we found that the majority of the franchisees showcased on the company website were either no longer Instant Imprint franchisees or had closed one or more stores.

When we traced the many of the testimonial franchisees currently shown as happy and successful, we found that their franchise locations were permanently closed.  Others had been sold or given to other owners less than half-way through the ten-year term of their franchise agreements.

TRUTH:  Instant Imprints FDDs state the Rosine’s franchise was “repurchased.”  Christine’s LinkedIn profile indicates they lasted less than 2 years into their 10-year agreement. In July, 2022 Instant Imprints promoted another Grand Opening (not re-opening) for the San Marcos franchise with another franchisee (Shawn Slotkin).

Don & Chandra Keith, of Calgary AB, sipping wine at a luxury golf resort,  state that Instant Imprints franchise is enabling them to “create a legacy” for their family and build a business on their own terms.

TRUTH:  The 2018 FDD lists Don & Chandra Keith as “Terminated or Ceased Operation.”  Google & BBB list their store in Calgary as “Permanently Closed.”  LinkedIn indicates they closed 4 years and 1 month into their 10-year agreement. Their legacy, it turns out, is to be one of the Instant Imprints FRUNDEAD.

Wendy Allen, franchisee in O’Fallon, MO states “We’re our own boss.  We can determine if we want to work past 9 to 5… It’s so rewarding!”

The Instant Imprints website lists their O’Fallon franchise location (under a different corporation name) for sale with an asking price of $200,000.  The 2022 FDD lists the initial investment for a franchise as up to $352,250.

Kathy Schneider of Fullerton, CA states that the Instant Imprints franchise enabled her to get out of the insurance business, get off the road and spend more time with her children.

TRUTH:  Google & Yelp state that the Fullerton, CA (OC) location Kathy Schneider opened with her son is permanently closed.  Kathy went back to work in HR.  Her LinkedIn work history does not mention Instant Imprints.

Area Franchisee Chuck Sawyer of Raleigh, N.C., on the franchisee testimonial page of the website,  states “”Instant Imprints is an exiting [sic] opportunity and offers the right driven individual a chance of a lifetime to grow their business exponentially.”

TRUTH:  The 2022 FDD lists Chuck Sawyer’s CWS Investments, LLC Raleigh NC under “Terminated or Ceased Operations” though he has other franchises still operating.

Vancouver, BC Multiunit Area Franchisee Gagan Bhathal is quoted in press materials: “We get everything we need as a franchisee, from beginning to end, from Instant Imprints.”

TRUTH:  The 2015 FDD list Gagan Bhathal as an active franchisee in Washington.  However, the 2019 FDD lists Gagan Bhathal in “The list of franchisees which have been terminated, cancelled, transferred, not renewed or otherwise voluntarily or involuntarily ceased to do business under the franchise agreement.”

TRUTH:  Mike reportedly left the system abruptly & dramatically at an Instant Imprints franchise convention [Rumor, hearsay].   LinkedIn indicates Mike Boyd was a franchisee until 2016 and an executive until 2017.  However, his video testimonials are still being used in 2022.

Beware of ALL Testimonials From “Area Representatives” or “Area Franchisees”

Obviously, testimonials from closed/failed/departed former franchisees without their current status disclosed is misleading and hugely deceptive.

But even testimonials from Instant Imprint franchisees who are still operating and successful, like Karen and Noel Eustace – Fredericton NB, Canada or the aforementioned Chuck Sawyer of Raleigh, North Carolina, may be misleading or deceptive.

The FTC requires that endorsements tied to compensation must be clearly disclosed, along with the nature of the financial relationship.  Instant Imprint Area Franchisees are portrayed as unbiased franchisees sharing their opinions… their role as salespeople is never disclosed.

Others we saw mentioned in promotions include:

TRUTH:    2022 FDD lists Jay Copeland in list of “Developer and area representative who had a business terminated,
cancelled, transferred, not renewed or otherwise voluntarily or involuntarily ceased to do business during
the most recently completed fiscal year.”  The St. Charles, MO Instant Imprints location is no longer listed in the FDD or on the company website.

TRUTH:  Featured in a consumer video still online.  He is listed in the FDD as having sold his Centennial, CO franchise to a new franchisee, who sued both he and the franchisor for fraud and misrepresentation.  The litigation is pending.  YELP! lists the Centennial Instant Imprints as permanently closed.

Instant Imprint Franchise Locations for Sale (Franchisees Who Want Out)

You CAN Live Forever… with The Instant Imprints Franchise Program!

October is the perfect time to consider your mortality and limited time on Earth.

While the price of FRUNDEAD immortality is extremely high, you can live on forever in the luxury resorts, tropical verandas & the passenger seat (if you call Shotgun! at Discovery Day) of Ralph Askar’s newest, leased Mercedes.

Just give Christian Collucci, Ralph Askar or one of their helpful franchise “consultants” a call today.

Tell’m Unhappy Franchisee told you to ask for the new untested Multi-Unit Cluster Pluck program… and Immortality… as an Instant Imprints FRUNDEAD franchisee!

SHARE YOUR OPINIONS, CORRECTIONS & INFO TO HELP US COMMUNICATE THE TRUTH.

Please post an anonymous comment below (your email won’t show publicly) or email Sean Kelly in confidence at UnhappyFranchisee[at]Gmail[dot]Com.

We want to know whether these franchisees still endorse the Instant Imprint franchise now that they’ve moved on… and whether the franchisor has been granted the right to continue to use their endorsement.

Acknowledgement:  We gained a wealth of information and insight from the Instant Imprint franchise complaint site FranchiseIssues.Com.  We are not affiliated with the Franchise Issues site, its author or its contributors.  Our information is gleaned from publicly available sources and anonymous tipsters.

Invitation:  All companies and individuals discussed on Unhappy Franchisee are invited to provide corrections, clarifications, explanations and respectful statements of opinion which we will acknowledge, respectfully, as a priority.  Threats, bullying & legal actions (against us or others) will also be addressed… though in a less respectful and always public manner. 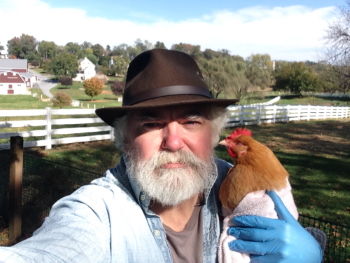 Sean Kelly’s literally the only one alive who wants to hear about your franchise-related woes.

Email Sean in confidence, at:  UnhappyFranchisee[at]Gmail[dot]Com.

One thought on “Join the FRUNDEAD of INSTANT IMPRINTS Franchise Marketing!”