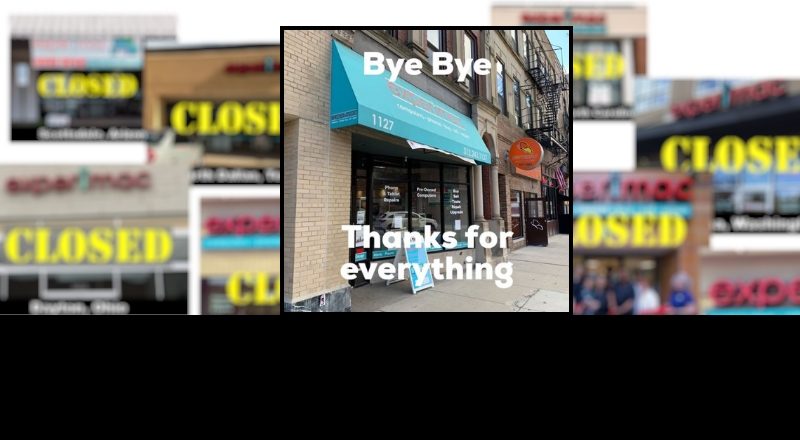 The Experimac franchise on West Madison Street in the Chicago Loop has closed despite a prime location and high customer ratings.  Experimac franchises have been closing nationwide – many funded by taxpayer-guaranteed financing via SBA guaranteed loans made through First Financial & Celtic Bank.  The rising failure and loan default rates prompt the question:  Did franchisor United Franchise Group (UFG), Ray Titus and Jim Muir misrepresent the viability and earning potential of the Experimac franchise opportunity? Despite dozens of positive reviews and a 5/5 star rating on Yelp!, the franchise location closed April 30, 2019 after just 28 months in operation (less than 3 years into a 35 year franchise agreement).

Like dozens of other Experimac franchises, their corporation KC CYGNET LLC was funded, in part, by a $150,000 granted by Celtic Bank through its SBA guaranteed loan program… likely with the assistance of loan broker Paul Bosley and First Financial.

Celtic Bank, it seems, would have little risk in granting the loan since the SBA guaranteed repayment to the bank of up to $127,500 in the event of a loan default.

According to a recent report by the SBA, banks like Celtic often sell the guaranteed portion of such loans, at a profit, on the secondary market.

According to critics of the SBA franchise loan program, this creates a virtually risk-free situation in which loan processors like Paul Bosley & First Financial, SBA-approved lenders like Celtic Bank, and franchisors like United Franchise Group (seller of the Experimac franchise) can profit at the expense of both failed franchisees and the American Taxpayer.

When Kevin Wright & Colette Gabriel were being pitched on investing in the Experimac franchise, they would have been told how founder Jim Muir (in his Mac Toy Store/Experimac store) generated $638,939 in sales his first year, $1,161,595 his second year, and $2,050,967 by his fifth year in business.1

They would have likely heard or read UFG CEO Ray Titus’ statement that “Our store went from $600K to $1.1 million to $1.8 million in its first three years in a retail location.”2

It would be certainly be reasonable to expect that Kevin Wright & Colette Gabriel would easily be able to meet or exceed Jim Muir’s store sales.

After all they are young, energetic and educated young professionals.

They had the benefit of Experimac’s site selection, training, manuals, established operational systems which Muir’s store didn’t have.

Unlike Muir, they had the benefit of Experimac’s operations and marketing support team, access to sources of inventory and supplies, and established digital marketing and PR resources.

Judging from their near-perfect Yelp! reviews, they obviously operated efficiently and with good customer service.

So how is it that the West Loop Experimac closed before completing their third year while Jim Muir’s Mac Toy Store/Experimac was generating $1.8M by that time?

This is not a phenomenon exclusive to the Chicago Experimac.

Why is it that, according to the 2019 Experimac franchise disclosure document, no franchise store has ever come close to achieving the sales attributed to Jim Muir’s original store?

In fact, Experimac Franchising LLC disclosed that the median gross sales for Experimac franchise outlets open for at least two years (average: 2.7 years) is only $281,747.

Was the Experimac Franchise Chain Built on a Fraudulent Earnings Claim?

Avivah’s complaint claims that the company did not disclose that the yearly revenue numbers of “$1.161 million, $1.834 million, and $2.603 million” allegedly included sales generated via e-commerce – “a source of revenue Experimac franchisees were not allowed to pursue.”

Experimac Franchising LLC is refusing to comply with Avivah’s discovery demand for “All documents substantiating or supporting the financial representations made in Item 19 of the 2015 FDD regarding the Mac Toy Store’s/Experimac store’s years of operation from 2012-2014.”

Experimac’s refusal to provide substantiation for its Item 19 earnings claim seems curious, since every one of its yearly franchise disclosure documents contains this statement:

Written substantiation of this financial representation will be made available to you upon reasonable request.

Are American Taxpayers on the Hook for Millions of Dollars Based on a Fraudulent Earnings Claim?

A recently updated spreadsheet of SBA loan data posted to the agencies website indicates that 58 Experimac-related SBA loans guaranteed by the Federal government.

If the primary numbers used to justify those guaranteed loans – Jim Muir’s Mac Toy Store/Experimac store revenue – turns out to be fraudulent, the American Taxpayer could stand to lose $5M-$10M based on a franchise lie.

Of course, we are not sure if that’s the case, so we will once again ask CEO Ray Titus, Experimac President Jim Muir, and UFG General Counsel to provide the written substantiation offered in its franchise disclosure documents, and to answer these basic questions: