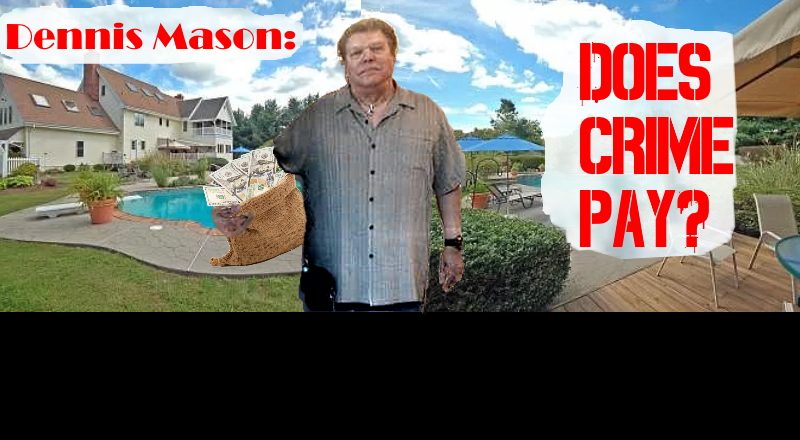 Dennis Mason, a notorious franchise fraudster who emptied the retirement & savings accounts of 160 victims, will be reporting to federal prison at the age of 75.  Following a nearly 7-year campaign by a coalition of victims and the UnhappyFranchisee.Com watchdog site, Dennis Mason was sentenced to three years in prison & was ordered to repay his victims more than $2M in restitution by District Court judge Gerald Pappert.  Mr. Mason’s partner in the NY Bagel Franchise Scam, Joseph Smith, will be sentenced for Conspiracy to Commit Wire Fraud and Tax Evasion in June.

Mason’s sentencing had been deferred during the prosecution of his co-conspirator, Joseph Smith, who pleaded guilty to conspiracy to commit wire fraud and tax evasion on February 11, 2012.

Fearful that the Frenchtown, NJ-based confidence artist, who operated for years using a number of aliases, would once again evade justice, an alliance of fraud victims organized by UnhappyFranchisee.Com publisher & industry watchdog Sean Kelly submitted Victim Impact Statements to Judge Pappert from across the U.S.

Around noon today, all were relieved at the posting of Judge Gerald Pappert’s sentence for Dennis Mason of 3 years incarceration followed by 3 years of supervised release.

Judge Pappert also ordered Dennis Mason to pay restitution of $2,100,450.00 to his victims. 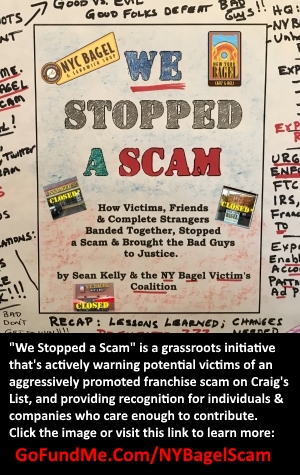 “In the end, the FBI agent in charge, prosecutor Ignall and Judge Pappert came through for the victims.  The time and effort it took to halt this blatant investment scam and bring the scammers to justice puts a spotlight on the urgent need to fix this blind spot in the legal system.”

The fraudulent scam targeted military veterans, first and second-generation immigrant families and general business opportunity seekers with persuasive ads placed on Craig’s List and other online sites.  Dennis Mason & Joseph Smith used fraudulent documents and false earnings representations to sell what they represented as fully-financed and developed franchised bagel shops.  Most victims never received the promised services and lost $20,000 – $60,000 to Mason, Smith and their associates.  Those who opened with their own financing generally lost $125,000 – $350,000.

Some of the failed stores had been financed with SBA-guaranteed loans which paid back the bank with taxpayer money. 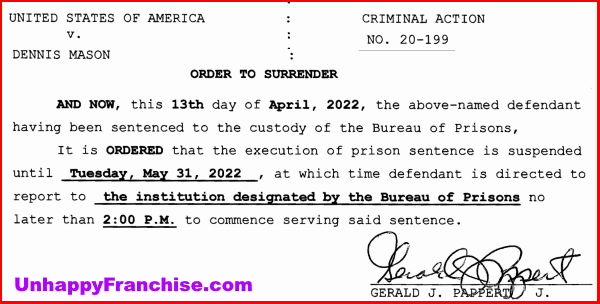 According to Kelly, there’s no joy in seeing a 75-year-old have to report to prison.

“I feel bad for his family, as I feel bad for the many victims who lost their dreams, marriages and homes to these predators.  I would have rather seen him go to jail when he was 45,” says Kelly.  Dennis Mason’s fraud-related lawsuits and judgements go back as far as the 1990s and featured such defunct franchise ventures as Mike Schmidt’s Philadelphia Hoagies, Motorwerks, Amazon Cafe, Petrucci’s, Morrone’s Italian Ice, Horn & Hardart, Java’s Brewin’, Windmill Hot Dogs and others.

“These Long-time Scammers Messed With the Wrong Victims”

A growing coalition of victims & Kelly’s online campaign of more than 75 warning posts and dozens of requests for investigations led to successful state enforcement orders being issued again Mason & Smith by the states of Maryland, Virginia and Washington.

Ultimately, it was the NY Bagel Scam victims’ unwillingness to go away quietly that will protect future potential victims from Dennis Mason & Joseph Smith.

“Some of the victims who submitted Impact statements lost their money close to a decade ago,”  said Kelly.  “They refused to let these guys continue to prey on innocent families.”

The founder of the NY Bagel Scam Joe Smith of Fishkill, NY, formerly of Newburgh, NY, is scheduled to be sentenced by Judge Pappert on June 27, 2022 at 10:00 a.m.