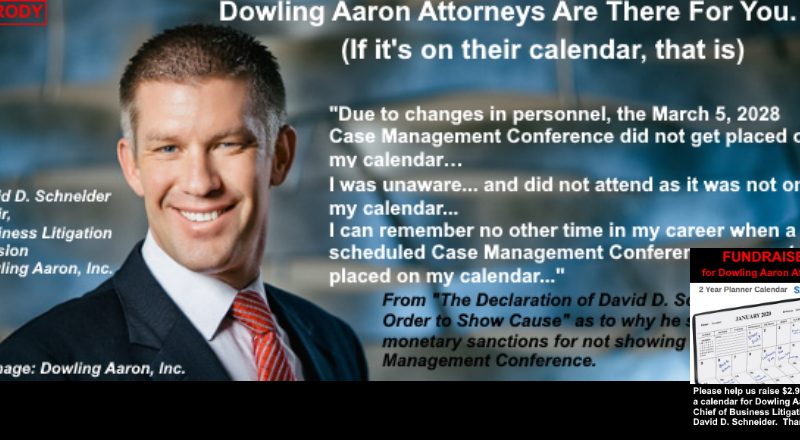 (UnhappyFranchisee.Com)  We haven’t received answers to our many questions posed in the article Deli Delicious Franchise Founders Sue Their Own Son for Defamation  or follow-up articles, so we’re going to ask other attorneys, including partners at Dowling Aaron, if they will address these related questions about DDFI’s law firm. 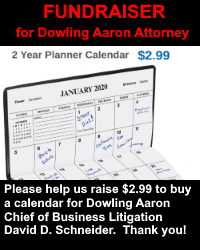 I say unfairly because David D. Schneider is not at fault, as you’ll soon read.  He is clearly the victim in all of this, since the Conference wasn’t on his calendar.

#1  Do Dowling Aaron attorneys encourage clients to sue their children? 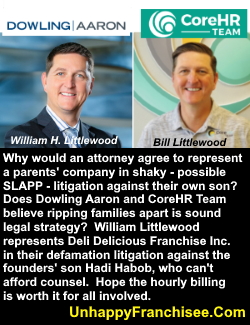 Is litigation against children who talk back to their parents a profitable specialty for Dowling Aaron attorneys?

Did Michelle Littlewood’s CoreHR Team hire her husband Bill Littlewood for his expertise in bullying former employees… or did he threaten to sue if she didn’t make him Chief Counsel?

#2  Do Dowling Aaron Attorneys Ever Accept Responsibility for Their Mistakes?

The first thing action attorney Schneider took to further Deli Delicious’ case was to not-show-up at the March 5, 2020 Case Management Conference. This did not please the court, which issued this Dowling Aaron Show Cause Order  to explain its negligence.

However, as David D. Schneider explains in the DECLARATION OF DAVID D. SCHNEIDER IN RESPONSE TO ORDER TO SHOW CAUSE , it clearly was not his fault:

At that time, the attorney handling the matter was transitioning to a new position as house counsel for a local company, and my secretary had resigned from my law firm.

Due to these changes in personnel, the March 5, 2020 Case Management Conference did not get placed on my calendar…

I was unaware of the March 5, 2020 Case Management Conference and did not attend as it was not on my calendar.

How can David Schneider be faulted for wasting the court’s time and jeopardizing his client’s case for missing something that wasn’t on his calendar?

I am embarrassed and sincerely apologetic to the Court for my oversight.
Based on the above, I am respectfully requesting that the Court exercise its discretion not to issue monetary sanctions against me or my firm resulting from my failure to appear at the March 5, 2020 Case Management Conference.

We hope that his colleagues at Dowling Aaron will rally around David Schneider and provide emotional support during this difficult time.

After all, he is “sincerely apologetic.”

And it’s not like his actions were so heinous that they warranted a defamation suit with 5 Causes of Action against an unrepresented individual.

It’s not like he privately called a company’s marketing “anemic and sophomoric.”

#3  Are Dowling Aaron litigators aware that true statements & opinions are not defamatory? 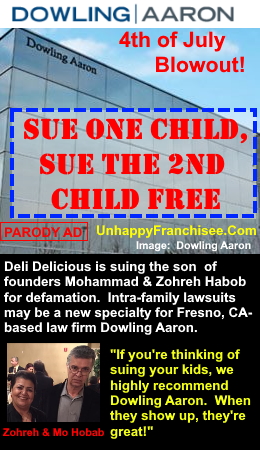 Bill Littlewood and David S. Schneider must know that many of the statements they allege as defamatory are opinion (that marketing is “anemic and sophomoric,” leadership is “a rudderless ship”) or fact.

Bill Littlewood filed the defamation lawsuit against former Deli Delicious Franchise Inc. employee Hadi Hobab, who is the son of the DDFI owners and brother of the President, seeking “damages in an amount to be proven at trial… punitive damages… costs of suit herein… preliminary and permanent injunctive relief… other such relief as the Court deems proper.”

Both the Parents/Plaintiffs and their attorneys know Defendant cannot afford to hire a lawyer, much less pay the judgement they are seeking.  He reportedly moved out of the area and hasn’t been connected with the business in recent years.

We know the likely upside for Dowling Aaron (a fat upfront retainer, plentiful hourly billings, no opposing counsel and no urgency to attend Case Management Conferences), but what is the realistic, desired outcome for DDFI and Hohammad Hobab?  To ruin his son’s reputation and credit with an outstanding default judgement that resulted from his inability to fight back?  A show of family dominance from an overbearing Iranian father?  A warning to employees and franchisees that questioning Supreme Leader will not be tolerated?

Thanks to Dowling Aaron, Deli Delicious is now “The Franchise Family That Sues Its Kids”

#5  Do Dowling Aaron attorneys caution clients about The Streisand Effect?

The Streisand Effect is when heavy-handed and bullying efforts to hide something or crush criticism backfires, causing much greater visibility and/or dissent than if the bully had just left it alone.  It originated from a situation that occured just a few hours south of Fresno when Barabara Streisand’s firm sued a photographer for $50M for publishing a photograph of her Malibu home.  The photograph had been viewed 4 times prior to the suit, 422,000 times the following month, and millions of times to date.  Plus, Streisand lost the suit and had to pay the photographer’s costs.

Mohammad Hobab, Ali Nekumanesh and DDFI have a lot more to lose from bad publicity than Barbara Streisand.  Was it really a wise move for a company planning to sell franchises to risk becoming known “The Franchise Family That Sues Its Kids”?

Was it really a wise move to invite public scrutiny and debate over the criticisms raised in the Deli Delicious complaint, such as:

That Deli Delicious is “unable to support the needs of franchisees.”?  The State of California raised the same concern, requiring Deli Delicious to impound franchise fees until a store opened.

That DDFI is “cheating its franchisees by requiring them to purchase through approved vendors”?  Not an unreasonable opinion, especially in light of DDFI requiring a switch from fresh baked to frozen bread to support its affiliate-owned bread bakery.

That DDFI  “has officers in place with no prior experience of running a franchise” and “unqualified leadership that is sailing a ‘rudderless ship’”  With unhappy franchisees trying to jump ship by converting or selling, and a franchise program no longer legally allowed to sell in California, is it a good time to invite scrutiny of DDFI’s officers’ ability to run a franchise company?

Maybe “rudderless ship” was an accurate description, as DDFI seems to be stuck on the rocks like a beached whale.

That “the franchise community has issued a “vote of no confidence” in the current leadership of DDFI.”  The Deli Delicious Franchisee Association says it has.  And despite our invitations, not a single franchisee has stepped up to defend DDFI

That DDFI “has taken loans from franchisees.”  Is this even a damaging statement?  If proof arises that DDFI lied about it in the court filing, it will be.

Thanks to Dowling Aaron, private criticism of Deli Delicious that likely didn’t even come from the Defendant is now being litigated publicly in the Court of Public Opinion.

Thanks to DDFI, Mohammad Hobab, consultant Ali Nekumanesh,  and Dowling Aaron attorney William Littlewood, private criticism of Deli Delicious that likely didn’t even come from the Defendant is now being litigated publicly in the Court of Public Opinion.

We are particularly eager to hear if Dowling Aaron will proudly refer to Deli Delicious v Hadi Hobab as a representative of its good work, and an example of the Dowling Aaron Litigation Guarantee:

And, of course, Dowling Aaron is guaranteed to get paid… not matter the outcome.

#7  Last question:  How much money has DDFI paid Dowling Aaron – so far – that could have gone to supporting struggling Deli Delicious franchisees?

One last thought – just an opinion – not worth suing me over:

In not dissuading DDFI and the Hobab family from pursuing this vindictive, meritless and self-injurious lawsuit, Dowling Aaron has done more damage to the reputation of Deli Delicious Franchise Inc. and its principles than any of DDFI’s defamation defendants ever could.

NOTE:  UnhappyFranchisee.Com is an independent website, does not represent any client or special interest group, and is not a party to any related litigation.  Dowling Aaron, David Schneider, Bill Littlewood, Deli Delicious, Mohammad Hobab, Ali Nekumanesh and all individuals and companies discussed here are invited to provide corrections, clarifications, rebuttals or statements both by leaving comments in the section below or by emailing ADMIN at UnhappyFranchisee[at]Gmail.com.  We respect open and honest discussion and the right to free expression.  We generally publish cease & desist and threatening letters the same day they are received.

OTHER ARTICLES INSPIRED BY DOWLING AARON:

ARE YOU FAMILIAR WITH DOWLING AARON, DAVID SCHNEIDER, WILLIAM LITTLEWOOD OR BILL LITTLEWOOD?

ATTORNEYS:  WOULD YOU TRY TO TALK A CLIENTS OUT OF SUING THEIR CHILDREN?