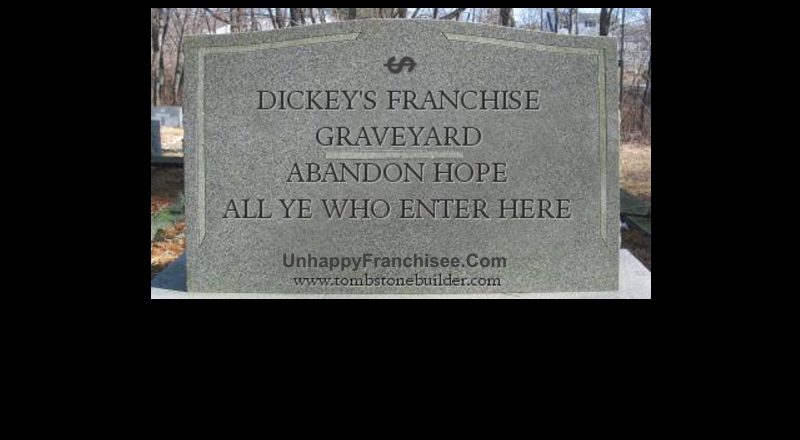 Dickey’s Barbecue Pit and its leader Roland Dickey Jr. are in panic mode, according to leaks from company insiders.  It’s rumored that Dickey’s’ dropping store count could trigger onerous terms imposed by its lender, Wells Fargo.  Dickey’s corporate employees continue to report abusive and unprofessional behavior and impossible demands from Roland Dickey, Jr. and his management team.  Could the high-turnover Dickey’s franchise scheme soon go up in smoke?
(UnhappyFranchise.Com)

Unfortunately, one of the worst and most abusive bullies in franchising (in our opinion) is getting worse and more abusive.

Dickey’s insiders report that the Dickey family is feeling intense pressure, and is raining down abusive treatment on employees and franchise owners as it fights for survival.

Note that the information and opinions in the quotations are provided by anonymous third-parties and have not been independently corroborated.

We ask our readers to investigate these allegations further, and report their opinions and findings to us in the comment section below.

We have long heard rumors that Roland Dickey Jr. had a tyrannical and near desperate insistence on maintaining a store count of 500+ (or at least maintaining the appearance of 500+ operational stores) due to the fact that terms of their loan with Wells Fargo was dependent on Dickey’s maintaining the size of its franchised network.

We’ve heard rumors that the interest on the massive financing package would increase if the number of stores decreased.

Other rumors allege that if store count dips below a certain threshhold, Wells Fargo has the power to take operational control and appoint its own CEO.

We haven’t seen any documentation or first-hand account of these financing stipulations.

Recently, we have again heard this allegation from yet another anonymous source:

When Travis Dickey, Sr. passed away, the company was put into Roland’s hands.

However other family members fought this and Roland took out a significant loan from Wells Fargo to pay them off and make them go away silently (since they had been showing up at the office to cause a scene.  Roland even hired outside security to keep these family members our of the office).

That loan was contingent on a certain number of stores staying open, and the interest rate on that loan fluctuates based on the store count (of open stores).  Therefore when stores close and Wells Fargo does a store count, the less number of restaurants that are open, the higher the interest rate goes on the loan.  This is why Dallas goes into panic mode whenever a store closes (the direction given to the field is “by any means necessary, get that store open, even if it’s just you (a corporate employee) working there”.

Roland is all smiles when he has new owners come into the system to open new restaurants- it means more stores are open, which gives him some cushioning.

In the opinion of some insiders, falling store count could spell the end of the Dickey’s family control:

If owners abruptly closed their doors and Wells Fargo did their store count, it could very well ruin Roland.

14th straight day working, 12+ hour days.  Regional Business Leaders are told to continue store visits, some of them are having to travel out of state.

I can’t complain because I have a job, but anyone in the company making over $65k took an 11% pay cut this week and no days off.

I expected the pay cut but continuing to have no days off until further notice is exhausting on the mind and body right now.

The culture is terrible, and every employee is searching for a new job.

Roland yells at office staff and uses vulgar language on an almost daily basis, and it’s common for staff to want to crawl under their desks when he’s in the office just to avoid his wrath.

…people are fired on any given day based on If Roland woke up on the wrong side of the bed.  The office staff feels much the same.

A recent hire quit after just 3 days because of how he was spoken to by one of the higher ups in the operations department.

All field employees are expected to be out visiting stores every day, and we’re currently working a 7 day work week.  Granted we want to be out to support our owners, but it’s not safe.  My money is on Roland firing anyone who wants to stay home.

Employees are cussed at, given no real time off away from work, and instructed to hound all of the owners in their regions multiple times a day.

…there was a round of layoffs about a week and a half ago and probably another one coming in the next few weeks from what I hear.

Oh, I can provide a ton of info.

Like how they don’t pay people the proper amount for gas reimbursement (“you’ll get it back in your taxes”), how they own the company that makes the furnishings in the stores and you can only buy from that company, how they strong arm their staff to get owners to sign up for 3rd party vendors because Roland gets a kick back from places like DoorDash.

[Dickey’s field staff] is instructed to hound all of the owners in their regions multiple times a day.  There is direction to call the owners multiple times a day starting early in the morning to make sure the owners are working (which, is documented by home office to use as back up if an owner comes after Roland.  They can say “well you’re never working in your store like you agreed to in your franchise agreement”).

Franchise owners allegedly get the brunt of this dysfunctional system, and they take it out on Dickey’s field staff:

What’s really sad is the poor owners who have to deal with this.

Dickeys doesn’t offer any new and exciting menu items or marketing ideas to drive people into the stores.

Some owners take over stores and get ZERO help from corporate leaving them to run stores while not knowing what to do.

The field team GENUINLY wants to help the owners, but the owners have been burnt by the company so many times that they are checked out.

The field staff gets cussed out, belittled, and kicked out of stores by owners who are tired of Dickeys.

All Dickeys says they’ll do is send legal letters, but those hold no weight.

It should be known and shared, that if an owner is down double digits in sales, a member of the home office and field ops staff is directed to call EACH of those owners EVERY morning, to see if that owner is working in their store that day.  They’re told to call the store to ask if the owner is working that day.

Home office documents this each day, as a way to build a case against any owner who tries to say that Dickey’s is not supporting them.   They will say (for example) that the owner needs to be in their stores first and foremost to build sales.

Although that argument isn’t wrong (and in fact, each owner agrees to spending 40hrs a week in their stores per the FA) it’s the fact that even if an owner is on vacation or taking a day off, the home office staff is directly told, “get them engaged in their store, I don’t care where they are”.

There are owners who have other well-paying side jobs, and staff is still told to get them into their stores regardless of where they are.  Some staff was even directed to go to those side jobs, to try and get the owner into their restaurant. That direction comes from Ed Herman.

Any field ops member will confirm this.

You’d think home office would care enough about its field employees to keep them updated on what to do with this coronavirus.

It’s Monday and the only thing we’ve heard from Dallas is to cancel our hotel and flight reservations (that we didn’t even make ourselves), for a meeting that we had in Dallas next week.   Other than that, not a peep of direction.

Finally, there is ZERO talk amongst the corporate team about food safety and quality- NONE.  Dickeys leaves everything up to the owners and if a store is operating without (for example) thermometers to temp the food, Home Office will just say “make sure you documented it and contact the owner” (and of course, the owners don’t answer our calls).  Most of the stores, I wouldn’t allow my family to eat in.

And in a side note, last week was the FIRST time I heard anyone from home office talk about the importance of washing hands for 20 seconds.  In the entire time I’ve been with Dickey’s, never once have they ever discussed hand washing.

One employee stated that he/she thinks things are dire for Dickey’s if things don’t change:

If things continue this way, there will be no office staff as well as no one in the field.

If I were to guess, we have major lay offs at corporate because owners are going to close their stores- which means Roland is screwed with that Wells Fargo loan.

I think he’s going to ax everyone to save money for that interest rate loan he has to pay.

Dickey’s Barbecue Pit once claimed it had more than 600 locations.

As the pressure from the Coronavirus shutdowns and quarantines force marginal and struggling franchises to close, and the pool of prospective franchisees to take over closed stores (churning) dries up, Dickey’s store count could continue to drop dramatically.

ARE YOU A DICKEY’S FRANCHISE OWNER OR CORPORATE EMPLOYEE?

HOW BAD ARE THINGS FOR YOU RIGHT NOW?  IS DICKEY’S PROVIDING THE SUPPORT YOU NEED?

DO YOU THINK THE DICKEY’S CHAIN WILL SURVIVE CORONAVIRUS COVID-19?  (Leave a comment below)