(UnhappyFranchisee.com)  The Desert Moon café in West Orange, NJ is now deserted… and no one seems to care.

According to the shopping center, Desert Moon opened July 2006 in West Orange and closed down in the middle of April.

Neighboring tenants weren’t surprised by the closing, saying the restaurant "was not very popular."

According to The Patch,

"One day before (the closing), a guy came here with his truck and took everything," said a worker at Cold Stone Creamery adjacent to Desert Moon. The woman did not give her name, but said the restaurant’s shutdown was "overnight."

"They didn’t even tell us,” she said.

Reviews on Yelp of the West Orange franchise ranged from indifferent to outraged to allegations of food poisoning.

…don’t be fooled the cute logo and the lure of "cheap" food. Secondly the staff HATES you. Not only do they hate you, but they hate their job. When my friend and I walked into the PLACE as first time customers we were not given the chance to review the menu and contemplate what we wanted to order. When we asked for suggestions the reply was "I don’t know" because obviously he hates his job and us.


…15 minutes later a king [the aforementioned cashier/cook/waiter] arrives with our "salads." A small plate of water drenched iceberg lettuce, pseudo grilled veggies, tasteless beans, sparse cheese, 4 stale tortilla chips, and a sample sized queso which the king charged me an extra few bucks for. Nevertheless the queso proved to be the highlight of this experience.

In summary, if you are in the mood for a sample sized queso and HORRIBLE customer service head on over to desert moon.

BEWARE of this Restaurant. We have reported the Woodbury commons location for food poisoning to Orange County health department. My husband and I ordered 2 Steak Fajita meals, we both got sick that very same night . It has been 2 days and we are still sick non stop diarrhea.

In The Patch article Darren Yelin, director of franchise sales at Desert Moon, states that there are a total of 14 Desert Moon franchises.

However, the Desert Moon website lists only 7 locations in 4 states.

We’re not familiar with the Desert Moon franchise program other than what we read, but it seems that both franchisor and franchisees are failing and possibly dying.

It’s sad, but in this economy poor service and mediocrity are tantamount to franchise suicide.

Will Desert Moon disappear like so many once-promising franchises? 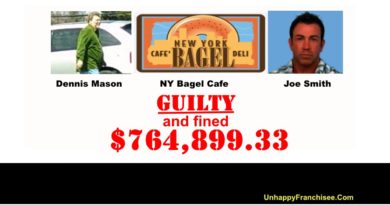