Dear God, you are all-knowing and all-powerful.  Your ways and Your Plan sometimes seem beyond our comprehension.

Like, for instance, how you are taking one of our kindest, gentlest retailers from us, while leaving the sub chain that has tortured its own franchise owners and the American public for years.

Borders let us sit in their comfy chairs, drink good coffee and read their books and magazines for free.

Borders made us smarter, more literate and better-caffeinated.

Quiznos tormented us with disgusting, singing rats, migraine-inducing cats, and workers who imply they had sex with the very ovens that toasts Quiznos subs.

Putting all else aside, Lord, doesn’t Quiznos deserve to be smited (and smited hard) for ANY of the three commercials posted below?

In what universe could the disgusting “Spongmonkey” characters induce a life form to ingest a Quiznos sub?

Where, exactly, did Quiznos marketing executives get the idea that they could win the fast food wars by grossing out and annoying their potential customers?

The reaction to this commercial was so bad that, according to Ad Age, Quiznos franchisees posted signs on their doors saying they weren’t to blame for the bug-eyed rodents.  Franchisees posted signs that directed complaints to Quiznos corporate.  Quiznos franchisee Huey Mack reported to Ad Age that all comments were negative and the backlash was clearly hurting sales.

Singimals – Proof Quiznos Hates Us All

Cyphervirus wrote:  “I’ve never wanted a cat to die before, until I saw this commercial…”

Soundsourz wrote:  “There is no possible way that any serious business could ever think something this pathetically annoying would ever serve as good advertising.”

netsurferx1 wrote:  I used to think that their commercial with those rat/hamster/gerbil things (way back in about 2003) was annoying. And then there was this.

Seriously, WHAT THE F*CK ARE THEY THINKING!  And how the f*ck does this sell sandwiches in the first place, anyway?”

dpaanlka wrote:  “I can’t believe Quiznos is still making ads like this. They’ve been trying the good old stuffed dead animal routine since at least 2003 and it has never, ever worked.”

Imagine the ad agency creative pitch for this commercial.  The agency exec puts up the Powerpoint slide and says “Our research indicates that what consumers really want is to imagine a Quiznos worker inserting his penis into the oven used to toast their Mmmm toasty sub.”

Scott: “I’m not doing that again, that burned.” (looks at groin)

Oven: “We both enjoyed that.”

And a few lines later…

Seriously?  How does one company make such bad advertising decisions so consistently for so many years?

WHAT DO YOU THINK?  SHOULD GOD DELIVER US FROM MORE UNHOLY QUIZNOS ADVERTISING WITH A BOLT OF LIGHTNING? SHARE A COMMENT BELOW. 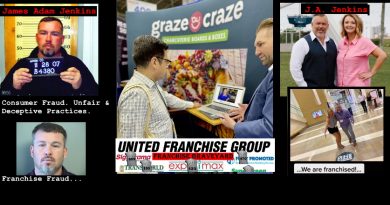