Here are some excerpts from an intersting article online about the Meal Assembly Industry and the toll it’s taking on owners . Some have adapted and started a new business out of the ruins of their failed Meal Assembly Store, others have just closed.

The Meal Assembly Industry seems to be going down the drain across the board, Franchised Stores as well as Independents are feeling the burn,

Although the idea spread quickly, the failures followed with 264 meal-prep stores closing last year (207) and another 200 expected to fail this year.

It’s been very hard if not impossible to get accurate numbers on store closures due to spotty and unreliable closure information on the part of most Meal Assembly Franchisors. Their failure to post closed stores and in the instance of Dream Dinners, just lists closed stores as temporarily closed, it would seem to indicate that Dream Dinners doesn’t want potential franchisees to know the real failure rate they have experienced. Other websites that “track” both independent & Franchised operations are just as inaccurate if not down right deceiiving as to the health of the Meal Assembly Industry as a whole.

Let’s Dish, which opened in 2006 in Scarsdale during the height of a nationwide boom in what are known as “meal-assembly” or “meal-prep” stores, is closing its doors for good this weekend. Nine employees will lose their jobs.

It is the last of four meal-assembly stores in Westchester to fail. Super Suppers of New Rochelle closed last month. One … Two… Three … DINNER in Briarcliff Manor and Sip & Supper in Tuckahoe closed more than a year ago.

Although Let’s Dish is a smaller franchisor and has not been one of the Big Girls (Super Suppers and Dream Dinners), it seemed to be golden on the east coast-but that, it would seem, is not really the case.

This story seems to be the the same in every market across the country.

Terese Hunerson of Scarsdale, who was so optimistic when she opened Let’s Dish in 2006 that she was planning to expand in northern Westchester and the Sound Shore, said she was done in by a combination of rising food and gas prices, as well as the challenge of selling consumers on the unfamiliar idea of assembling meals at her store and taking them home to cook.

“This concept is meant to help a busy person, but people found themselves so busy that they didn’t know how to incorporate this into their lives,” Hunerson said.

The self-proclaimed expert in the Meal Assembly Industry says:

Industry consultantBert Vermeulen, who founded a Meal Prep association in 2005, said the idea was too new to support the number of stores that opened.

Mr. B opined in this same article that:

“This is a concept where the stores got ahead of the market. The majority of the target market is not aware of this concept and why it works,” he said.

And yet; here’s an example of Vermulen’s Meal Assembly BAD fortune-telling, it reminds one of the late Johnny Carson’s -“the Great Carnak” Schtick

In reality, if you read his website carefully you will find that a few more than 1250 Meal Assembly Stores exist in the US, the remainder are on Canada. Even that number is in dispute as per the observation at the beginning of this article.

And those outlets will be very different from the original stores that struggled to find customers. In 2004, 90 percent of meals were assembled by the customer. Vermeulen said more store owners are adopting a “grab-and-go” model where they assemble meals for time-pressed consumers reluctant to spend up to two hours crafting a pack of meals themselves.

He predicts that by 2010, 80 percent of the meal-prep industry’s revenue will come from grab-and-go meals.

I predict they’ll find out that he is full of hot air, and if I’m not mistaken his descriptions are already in operation, and doing a brisk business- they’re called Grocery stores and Take Out Restaurants.

He likened it to the failure of pioneering online grocery store Webvan, which went bankrupt in the dot-com bust. Today, Fresh Direct is making a success at online grocery delivery because the concept has had enough time to percolate into consumers’ consciousness, Vermeulen said.

It has “percolated” into the “consumers consciousness” as he so eloquently puts, because of the very same economic down-turn, the skyrocketing food and fuel costs that have caught most Meal Assembly Store owners in between a rock and a hard place. Those same factors have made services like Fresh Direct more economical for some people.

It needs to be pointed out that the one of the reasons that Meal Assembly Stores are getting “out-dished”, is because Grocery Stores and by extension services like Fresh Direct, have stepped up to the plate and are pretty good at getting a large piece of the tummy pie. One stop for Mom or Dad after work equals time and money saved in today’s hard economic times.

Rolling out a new concept requires a deep commitment in marketingfrom the franchiser, Vermeulen said, something that Let’s Dish and others didn’t provide.

“Many of the franchisers thought it was easier than it was. They sold franchises without thinking through the marketing program they were going to run,” he said.

He likens the Meal Assembly business to the Papa Murphy’s Take & Bake Pizza organization, he feels that they did it correctly.

” Pappa (sic) Murphy’s wouldn’t go into a particular metro area unless they went in big so they could establish awareness of their concept. Their concept is pizzas you pick up uncooked that you cook at home. It’s not that different from meal prep, but the roll-out was very different,” he said.

EXCEPT: It’s like comparing the perverbial apples to oranges- it’s proven that kids LOVE pizza of almost any kind (re-Little Caesars Pizza), not so with Meal Assembly Meals. Those little rug rats are harder to please than the average bear; which means the meal that Mom bought at the local Meal Assembly store for dinner will have to be supplemented with PBJ or Chicken Nuggets from Mickey D’s for the little ones.

Here’s another difference-Papa Murphy’s vetted their prospects and if they didn’t meet the criteria, they didn’t get the location. Not so in Meal Assembly Land where anyone with a valid check can own a franchise.

Every Meal Assembly Franchisor disregards even THEIR OWN specifications for ownership, and in fact a couple are on the second round of “finding” just the “right” franchisee, since the first round of franchisees were forced into bankruptcy when their dreams turned sour.

Some ex-owners have been able to land on their feet after their Meal Assembly business went bust.

Melanie Heim of Super Suppers in New Rochelle said she and business partner Beth Dexter of Bronxville put in a lot of hard work on a failing concept.

Making their own meals just didn’t resonate with people in Westchester, Heim said.

“I would hear, ‘This is great. I love this. It’s so easy,’ but I’d never see them again,” she said. “It never moved from novelty to habit.”

Heim and Dexter, along with Larchmont chef Liv Grey, have converted their Super Suppers location into a new catering business called The Pantry. “We’ve adapted and moved on,” Heim said.

This is hardly the position ANY one who has spent hundreds of thousands of dollars and man hours invested in a Franchise to find themselves in. Luckily they were fortunate enough to be able to move on to another venture and survive the loss. Others are not so lucky. Some folks who still beleive that the “idea” is a good one are willing to finance a “re-sale” store, some of the bigger franchises like Dream Dinners and Super Suppers are willing to re-sell a failed location to a new owner. But Buyer Beware!

Ryan Knoll, an attorney who runs the FranchisePundit.com Web site, said it is hard to distinguish between a gimmick franchise and one that will be around for decades.

“Franchisers less than 5 years old are much higher risk because they have not fully tested their systems nor have they created brand recognition and loyalty,” he said.

This describes every single Meal Assembly Franchise selling franchises today-NONE are more than 5 years old and NONE have corporate stores still in operation.

As the meal-prep business falters, franchisees are venting on sites like Meal Assembly Watch (www.mealassemblywatch), on which a recent poll asked visitors to vote on whether the concept would survive beyond this year. Sixty-one percent said yes while 39 percent said no.

The ode to Franchisepicks own Sean Kelly:

There’s even gallows humor on some sites, including a mock story that suggests meal-prep stores should diversify to offer Botox or plastic surgery as a side business with a motto like, “Nip, Tuck & Peking Duck.”

My advice to Carolyn is to please wake-up and smell the coffee.

Carolyn Calabria, owner of Entrée Vous in Pomona, said the failure of four meal-prep stores across the river has her concerned, but not defeated.

“It’s a little alarming, but I have to take it as a positive that although it didn’t work there, everyone has to judge their failures and successes as an individual. I hope that when people come and enjoy their culinary experience, they’ll come back,” Calabria said.

Practical experience has not proven this to be the case. Retention is very hard to come by in this industry. It’s more than “a little alarming”, it’s like the understatement of the century!

The story of the ever changing/evolving model is another problem that most newbies can’t understand. They thought they were buying a proven model and in reality they were the guinea pigs as Franchisors were making it up as they went along They soon realize that it is not the concept they bought and sunk hundreds of thousands of dollars into.

As a franchisee, Let’s Dish’s Hunerson blames her parent company for being too rigid and failing to adapt as it became clear the concept wasn’t working as originally designed.

With the economy turing against their best efforts, owners are being forced to make the hard decisons to close their doors for good. Most have drawn an line in the sand and refuse to sink more good money after bad into a business that has proven to be unproductive economically for them. 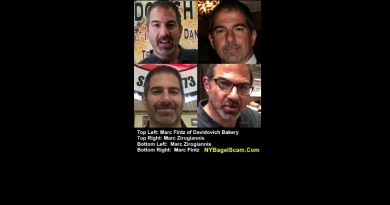 One thought on “MEAL PREP: Another One Bites the Dish”