By posting 5000+ touchy-feely inspirational messages and links to raw food recipes, Rawman Walking had built up an adoring following on Twitter.  He was just starting to pitch his ardent followers – most of whom were middle-aged women unaware of his controversial past – on attending his raw food retreat at a cost ranging from $1500 – $14,000.  He and partner Ben Doyle (also an infamous Cuppy’s Coffee partner) were beginning to mention investment opportunities for expansion of his so-called “retreat,” which he calls The Sanctuary.

An anonymous poster left a message on UnhappyFranchisee.com alerting the unhappy franchisees who had been abandoned to fend for themselves by Cuppy’s Coffee about Morg’s new identity.  A Facebook group called Beware of Rawman appeared.  At least three Tweeters (FoodDiva2, BewareofRawman & Rawman_Rawdeal) began posting warnings to alert the fans of Rawman Walking that their new guru had a controversial past.  The Tweeters posted links to expose-type blog posts on UF (Beware of Rawman Walking aka Morg Morgan) and on Michael Webster’s Misleading Advertising Law blog (Rawman or Raw deal?). Rawman_Rawdeal (MJ) aggressively gathered 1100 followers of his own and posted Rawman-warning tweets:

Rawman Morg Morgan fired a series of DMs (Direct Messages) to Rawman-Rawdeal claiming he was a fellow victim of his own company, and innocent of claims he misappropriated funds from an estimated 200+ franchisees and franchise applicants:

Hi, MJ. RawmanWalking: I just saw your posts. My private DM’s Twisted. u are not interested n anything but making money on your blog. Good bye.

Hi, MJ. RawmanWalking: I have never wished evil on anyone. Even when you continue to try to hurt me and my family. I will not hate u Stop this craziness.

Hi, MJ. RawmanWalking: What you are doing is so sick. All to make money on your blog. You could care less about ALL of us who were hurt. Stop spreading lies!

Hi, MJ. RawmanWalking: I wouldn’t give u anything! You twist what I say spread lies slandering me. I never intentionally hurt 1 person yet U seek 2 destroy me.

Hi, MJ. RawmanWalking: Get the facts. I have never stolen 1 penny from anyone! Stop the harrassment .What is your point? I have given evey agency the records.

Rawman Walking’s new friends and followers were upset with the revelations.  A handful angrily defended him, turning on the messengers:

One spiritual “healer” even predicted cancer for those who criticized Rawman:

7 days after the first negative Tweet, Rawman left a flurry of quotes from Mother Theresa & Gandhi and then, presumably, deleted his page.  His thousands of tweets disappeared instantly.  Rawman was detweeted.

However, Rawman Walking’s two blogs are still live and he is still, as far as we know, soliciting guests for his women-only raw food retreat.  Perhaps he’s even accepting investors for his new raw deal, The Sanctuary. 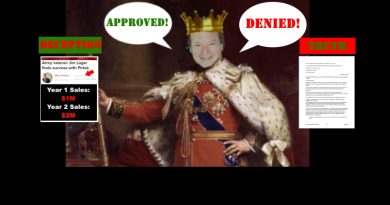