David Rutkauskas, CEO of Tulsa-based Beautiful Brands International (BBI), publicly unleashed a string of insults and expletives on me that would have been shocking coming from a 7th grade boy, much less the founder of an international franchise company.

On his Twitter page, right next to the picture of his wife Camille and their two children, Mr. Rutkauskas (without the use of asterisks) called me a “#@!* face,” “fat ugly #!@* face,” and “ugly mother #!@*.”

(I have withheld the screenshot of the attack for the moment, but may include it in a future post).

What specifically set Mr. Rutkauskas off was Julie Bennett’s unflattering Franchise Times article  (Reality Check), which had been prompted by my reporting about BBI on UnhappyFranchisee.Com.

But the deeper source of David Rutkauskas’ rage, in my humble opinion, is that his attempts to bully writers, his former franchisees, employees, service providers and partners is backfiring, big time.

Mr. Rutkauskas and his attorney, Robert Sartin of Barrows & Grimm P.C., haven’t caught on that bullying, in the Internet age, will do much, much greater damage to their reputations than the original criticism.

Franchisees who posted with their real names almost immediately received threatening letters demanding they retract their comments.  UnhappyFranchisee.Com removed the franchisees’ names, but refused to take down the comments.

In fact, the bullying of the franchisees by Beautiful Brands & Sartin prompted several more posts, and encouraged UnhappyFranchisee.Com to look deeper into what else BBI was so intent on hiding.

These Twitter attacks falsely alleged that one former BBI partner’s stores were closing and its founder had been ousted, and another partner brand was being sued for food poisoning.

@FuckOffLiars threatened me directly using both my real name and Twitter name: “…We are watching u and your lies… we know where you live.&.HaHa…#GunsareLegal.”

I reported the threat to the FBI with my suspicion* that it could possibly be David Rutkauskas or a close associate.  Bullying Backfire #2.

David Rutkauskas and Robert Sartin have reached the moment that every bully dreads:  when that one crazy kid doesn’t run, even when his nose is bloodied and his jeans are torn.

BBI Files Suit Against “John Doe” (aka Me)

BBI’s hometown paper, Tulsa World, published an article (Camille’s empire copes with setbacks) on the decline of Beautiful Brands which included a scathing commentary on Camille’s franchise support by a franchisee who lost everything, including his marriage, in the ordeal.  Posting as Unhappy Franchisee, I left four pretty innocuous comments on the article.  Many of the other 29 comments left on the article were less innocuous.

BBI attorney Robert Sartin filed suit against “Unhappy Franchisee” (as “John Doe) and subpoened Tulsa World and Google demanding my identity.  It’s no big secret that I run UnhappyFranchisee.Com, so I believe the real motive was to send a bullying threat to those who dare express their opinions about BBI, even anonymously.  A story and the suit itself appeared in the Tulsa Journal Record (along with the obligatory deception that BBI has “297 locations around the world,” when their websites list 72 locations) the day after the complaint was filed .

Attorney Jonathan Fortman, of St. Louis-based Fortman Law, has agreed to defend me against the bullying tactics of David Rutkauskas, BBI and Robert Sartin.  I waived my anonymity, as I am not afraid to defend my views and actions out in the open.  I hope David Rutkauskas is ready to do the same.  I expect the discovery process will prove to be Bullying Backfire #3.. (and more).

On UnhappyFranchisee.Com, I expressed my opinion that David Rutkauskas and Beautiful Brands International have used four publications in particular (Tulsa World, The Journal Record, QSR, Fast Casual) to promote the illusion that BBI is a thriving, successful, growing franchise company when, in fact, more BBI-owned franchises have closed than are successful and many of its “partner brands” have parted ways without selling a single franchise.

David Rutkauskas responded with tactics that have worked, to a limited degree, in the past:  bullying and legal threats.

But David Rutkauskas and Robert Sartin have reached the moment that every bully dreads:  when that one crazy kid doesn’t run, even when his nose is bloodied and his jeans are torn.

In my opinion, none of the fact-based criticisms that I have expressed come close to impuning the reputation of Beautiful Brands and David Rutkauskas as do their remarkable personal and unprofessional Twitter attacks (Bullying Backfire #4) and their attempts to use the legal system to strip good people (the former franchisees and partners who bought Rutkauskas his house and Mercedes, and who provided the funds for Sartin’s invoices) of their 1st Amendment right to free speech.

Potential franchisors would do well to watch how well bullying works out for David Rutkauskas and Beautiful Brands International.

As is so often the case, the attempted cover-up will, IMHO, prove to be much more damaging than the initial allegations.

* I don’t have proof that Mr. Rutkauskas posted these threats directly.  I hope to find out the identity of the Tweeter via subpoena if our lawsuit advances. 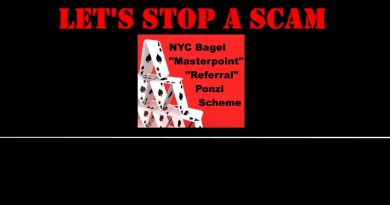