(UnhappyFranchisee.Com)  If you have inquired about a NY Bagel Café franchise or Horn & Hardart franchise, you may have interacted with one of franchising’s most controversial salesman, Dennis K. Mason, without even knowing it.

Dennis Mason uses a variety of aliases and phone numbers that change with time and with franchise concept.

We have asked Dennis Mason to provide an explanation as to why he uses aliases in his franchise advertising and sales efforts, but have not, so far, received a response.  We have also invited him to provide corrections, clarifications, explanations or rebuttals to the list that follows. If you have worked with Dennis Mason in the past, we invite you to provide your opinion – good or otherwise- either below or by emailing us in confidence at UnhappyFranchisee[at]gmail.com.

Recently, ads on Craig’s list for Horn & Hardart, a brand that has twice before surfaced and failed, direct readers to contact a “David Malin” at Dennis Mason’s phone number.

Why Does Dennis Mason Hide His Identity?

Dennis Mason has a long history of franchising controversies, going back 20+ years.

Many of the franchise companies he reportedly sold for are no longer in business or no longer selling franchises, including Mike Schmidt’s Philadelphia Hoagies, Petrucci’s Dairy Barn, Morrone’s Italian Ice, Frozen Dessert Systems LLC, Amazon Café, Planet Hoagie,  Laser Lube, The Brake Shop, and others.

Dennis Mason’s modus operandi is to partner with a small franchisor in the Northeast, like Joe Smith (NY Bagel Café & Deli).  The franchisors provide the appearance of a small, successful, growing chain with attractive stores.

It’s alleged that the franchisors and Mason hide abysmally high failure rates and the many stores that have opened – and closed – in the past.  They split the upfront franchise fees, which typically range from $17,500 to $29,500, sometimes paying pet franchisees a fee to play along.

We tried to track down all of the franchise lawsuits and controversies involving Dennis K. Mason from publicly available sources.  Here’s a working list of what we’ve found so far.

One possible reason for Kwench franchise salesman Dennis Mason’s many assumed names is that people may be less willing to invest with someone who claims to be financially successful, but has filed for bankruptcy twice:

There are a number of franchise stories throughout the years in which franchisees allege that Dennis Mason sold them on deeply flawed franchises by providing illegal earnings claims and withholding  potential risks. Mason may be trying to keep franchise prospect from Googling his name and seeing the bad press.

Back in 1997,  Mason was featured in a story on the failed Mike Schmidt’s Philadelphia Hoagies franchise.  The story is still visible online:

Franchisees Strike Out Despite Hall Of Fame Name

The Mousleys had operated one of 10 franchises bearing the Schmidt name, all in eastern Pennsylvania and South Jersey. Now, all but one of them have closed – victims of lagging sales and, the franchisees say, too little help from the company… Four franchisees in the group were forced to close their stores and are preparing to file for bankruptcy.

They also are preparing to sue Mike Schmidt’s Philadelphia Hoagies and its owners, Richard Speeney and his sons, alleging misrepresentation, deception and possible fraud. They also plan to sue Dennis Mason, the salesman who sold them the franchises… Mason said he was not liable, because he had given the franchisees the information given to him by the franchiser.

A Pennsylvania couple has accused a Rutherford-based bagel franchise company of defrauding them into buying a franchise by inflating possible revenue and low-balling costs.

“After opening, plaintiffs learned that many of the oral and written communications and documents upon which they relied were false and deceptive,” the suit says. When Cunningham inquired about purchasing an NY Bagel franchise in the Summer of 2009, Defendant Mason told him that NY Bagel franchised stores were earning $10 ,000 to $15,000 per week in revenue.
When Cunningham visited franchised locations in September 2009 with Mason and Smith, Mason repeated the representation that franchised locations were earning $10,000 to $15,000 per week…
After opening the franchise, Plaintiffs learned that the financial performance representations, the representations about food costs, and representations in the FDD were false, misleading, and often incomplete…
In total, Plaintiffs have invested and lost roughly $230,000 in the business and Cunningham has taken on personal lease obligations of which roughly $150,000 remain…

Supreme Court of the State of New York, Orange County NY Bagel franchise litigation: According to NJ resident Mohamed Elsaid, he was sold a NY Bagel franchise in 2011 by Dennis Mason & Joe Smith.  His contract stated that his franchise fee was refundable if he failed to get funding but they refused to honor the agreement.  He took them to court and won a judgement but has been unsuccessful in collecting.

On 10/8/15, The Office of the Attorney General of Maryland issued a Final Order to Cease and Desist In the Matter of: NY Bagel Enterprises, Inc., SMS, Inc., Joseph V. Smith, Dennis Kenneth Mason, finding that Dennis Mason has continued his pattern of disregarding franchise laws and deceiving would-be franchisees with illegal earnings claims.

The Order reads, in part:

In March 2015 “Mike H,” a Maryland resident… called the number listed in the Craigslist advertisement and spoke to Dennis Mason.

Mason told Mike H that by purchasing a New York Bagel Cafe & Deli, his cafe could earn $1,500 per day….

42. Respondents Smith, Mason and SMS violated section 14-223 of the Maryland -7- Franchise Law by offering and selling in Maryland a franchise without giving the prospective franchisee a copy of the offering prospectus required under the Maryland Franchise Law.

44. Respondents Mason and SMS violated 14-229 of the Maryland Franchise Law and COMAR 02.02.08.16(D) by making oral or written statements concerning the potential earnings from operation of a New York Bagel Cafe & Deli franchise without making the required disclosures about those potential earnings in the offering prospectus given to a prospective franchisee.

After looking over Dennis Mason’s 20+ year history of franchise controversies, the reason he hides his real identity is pretty clear.

The question is:  Why is he allowed to keep getting away with it?

UnhappyFranchisee.Com will be happy to provide a free review of any documents and correspondence for these companies from prospective franchisees.

HAVE YOU INQUIRED ABOUT A  NY BAGEL CAFÉ, JAVA’S BREWIN’ OR HORN & HARDART FRANCHISE?  SHARE YOUR EXPERIENCE BELOW. 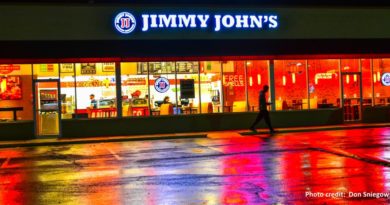