Monmouth University, Northeast Business and Economics Association (NBEA), the Journal of Business and Economic Studies  (JBES) are under fire after JBES Managing Editor Scott A. Jeffrey threatened a journalist with legal action for questioning the academic validity of paper due to be published in its fall issue.

The results of a study purportedly proving that franchise businesses have resale values 1.5 times higher than similar independent businesses is being aggressively promoted online through news, business and press release distribution outlets.

The study’s abstract and results were reportedly presented two months ago at the Advisory Board Meeting for the Titus Center of Franchising at Palm Beach Atlantic University.

The Board meeting attendees and other industry colleagues have been aggressively promoting the study’s alleged conclusion that business owners benefit from substantially higher resale values if they buy a franchise rather than operate their own independent business.  However, the study’s authors and Palm Beach Atlantic University officials have repeatedly ignored requests for the study abstract or details regarding the study’s methodology, basis for comparison or source of data.

At least one Titus Advisory Board Member has stated that that information will have to wait until the study is published in the Fall issue of NBEA’s Journal of Business and Economic Studies.

The primary author of the study, Dr. John Hayes, is the Titus Chair of Palm Beach Atlantic University and serves as promoter and spokesperson for Ray Titus and United Franchise Group (UFG).

A prior UnhappyFranchisee.com investigation revealed that John Hayes’ book series “12 Amazing Franchises” was a pay-for-play promotional scheme that allowed franchise sellers, including UFG, to furnish their own promotional chapters to be published under John Hayes’ name for a fee.

A related investigation revealed that John Hayes boosted his Amazon book rankings with purchases and positive ratings from friends and family… in violation of Amazon Terms of Service.

Dr. Scott Jeffrey:  “…You do not understand the workings of an academic journal”

Unhappy Franchisee publisher and investigative journalist Sean Kelly contacted Dr. Scott Jeffrey to alert him that his journal was being used to to bolster the credibility of a suspect study… one whose self-serving results were being aggressively promoted but whose methodology was being withheld  – and to inquire about the basis for publication.

Kelly expressed concern that uncorroborated claims about the unreleased study were already being used by franchise pitchmen and business brokers, using the “peer-reviewed” acceptance for publication by the Journal of Business and Economic Studies as proof of its validity.

Kelly also questioned Jeffrey on how carefully JBES had vetted the study, as comparing the widely disparate resale of a franchise business to an independently owned business would be complicated and  problematic.  Kelly worried that the data had been cherry-picked from UFG’s own broker network.

Rather than address any of Kelly’s questions or concerns, Jeffrey objected to the accusatory tone of his email and demanded an apology.

Please note that this will be my last reply to your inflammatory emails. I have been advised by council [stet] to avoid future contact.

The editorial board is meeting to discuss our next steps, with the input of the NBEA board.

The journal is also in the process of obtaining legal representation.

I have also forward your communications to the general counsel of Monmouth for him to consider next steps regarding your decision to bring MU into the discussion.

My ethics are not in dispute here, although I cannot say the same for other involved parties.

As I have said an [stet] will continue to say, our journal undergoes a blind review process.  This is how we determine whether we will publish articles.  If you have evidence of academic integrity problems, please provide them

“Editor Jeffrey threatened me with legal action from a major university and a business association.  Why?  Because I asked questions and addressed him in a non-deferential tone.” – Journalist Kelly 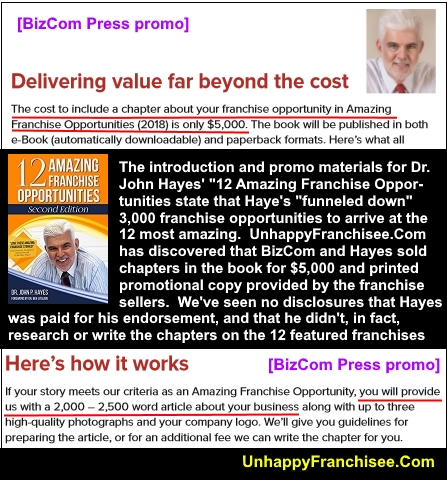 According to Kelly:  “Dr. John Hayes and United Franchise Group have a history of creating deceptive and misleading publications to bolster their franchise sales.  Their ‘Titus Center’ of Palm Beach Atlantic University is even named a notorious franchise salesperson, Roy Titus, who was fined millions and slapped with a permanent injunction by the Federal Trade Commission in 1999…”

“I assumed a professor who teaches business ethics would appreciate the heads-up,” he states.  “Instead, I may have to find a First Amendment attorney or organization to help me stand up to these bullies.”

Kelly said he will likely contact the Reporter’s Committee for Freedom of the Press, PublicCitizen.Org, Electronic Frontier Foundation and the ACLU, all of whom have helped him in the past.

“This journal subscribies [stet] to the principles outlined by the Committee on Publication Ethics.”  – Journal of Business and Economic Studies website

The Journal of Business and Economic Studies website states that it “subscribies” to the principles outlined by the Committee on Publication Ethics (COPE).

On the subject of Allegations of Misconduct, COPE states:

Journals should have a clearly described process for handling allegations, however they are brought to the journal’s or publisher’s attention.

Journals must take seriously allegations of misconduct pre-publication and post-publication. Policies should include how to handle allegations from whistleblowers.

Ignoring valid questions & trying to intimidate an investigative journalist with legal action from two organizations with superior financial resources is likely NOT how COPE recommends handling allegations from whistleblowers.

When Kelly raised the issue of Conflicts of Interest, Jeffrey wrote that the journalist must not “understand the workings of an academic journal.”

According to Kelly, Professor Jeffrey’s response seemed to indicate that the issue of Conflicts of Interest had never really occurred to JBES… but did now…:

We send our articles out for blind review and base our publication decision on that feedback.

Until now, we have not asked authors to disclose potential conflicts of interest.

We will now begin that in the hopes to avoid issues such as this in the future.

Journals should include policies on data availability and encourage the use of reporting guidelines and registration of clinical trials and other study designs according to standard practice in their discipline.

The source of data is an important indication of whether this study is valid or if its more misleading and deceptive propaganda being used to dupe unsophisticated franchise investors.

Kelly states that United Franchise Group (UFG) owns and directs both in-house franchise sales teams across several brands as well as its own network of franchise and business brokers (Transworld Business Advisors).

Could the source of this data be the very same sales organization that is now benefitting from the dissemination of the as-of-yet unsubstantiated report findings?

Could it be that UFG is feeding its own Titus Center/Rinker School of Business cherry-picked sales data that indicates the claim it wants to make… and the Journal is all-too-happy to pretend its legitimate scholarship?

According to Kelly, universities have been under fire in recent years for fostering a “Cancel Culture” that chills free speech and kills open discussion and debate.

He points out that both academic journals and the organizations that publish them have been discredited and mocked by the large number of false and nonsensical papers approved for their “peer-reviewed” publications.

Monmouth University Professor Scott Jeffrey  and the Journal of Business and Economic Studies seem determined to get their 5 minutes of shame for both ethical indifference and academic cluelessness.

“Professor Jeffrey contends that blind peer review absolves his journal of responsibility for even reading, much less scrutinizing, content he publishes…” states Kelly.

“There’s a nursery rhyme about Three Blind Mice who operated in a similar fashion.  Mr. Jeffrey may want to review how things worked out for them…”

* As “C” is the lowest rating on the respected ABDC Journal list, Kelly is requesting that the “Journal of Business and Economic Studies” be dropped from the list altogether.

In response to an emailed link to this article and an assurance that he was not intimidated by legal threats,  Monmouth University General Counsel replied:

Mr. Kelly: The Journal of Business and Economic Studies is an independent publication not associated with Monmouth University.

Christopher had either not been contacted by Professor Jeffrey (as he had stated) or hadn’t read his message (or this article).

The Managing Editor of The Journal of Business and Economic Studies is a Monmouth University professor.

Yesterday, Dr. Jeffrey informed me via email that he was acting on advice of “council” and that “I have also forward your communications to the general counsel of Monmouth for him to consider next steps regarding your decision to bring MU into the discussion.”

Perhaps you should speak with Professor Jeffrey who thinks, apparently, he is justified in using the threat of your University’s legal clout to intimidate a journalist who questioned his partnership with for-profit franchise sellers.

Lies, Scams And Pay For Play In Franchising

ARE YOU FAMILIAR WITH FRANCHISE RESALES, DR. JOHN HAYES, UNITED FRANCHISE GROUP OR DR. SCOTT JEFFREY?  SHARE A COMMENT BELOW.