In the early 2000s, Tulsa franchise seller David Rutkauskas created the illusion that the franchise concepts under his Beautiful Brands umbrella were highly successful and growing.

With the help of eager local publications, like Tulsa World and The Journal Record, and restaurant industry trade publications like QSR & Fast Casual, Rutkauskas was able to publish exaggerated expansion numbers in press-releases dressed up as legitimate news.

One of Rutkauskas’s favorite techniques was to sell a franchisee the option to open a number of units in a given area, and then count those options as franchises that were “in development.”

This created the illusion of growth that far exceeded reality. 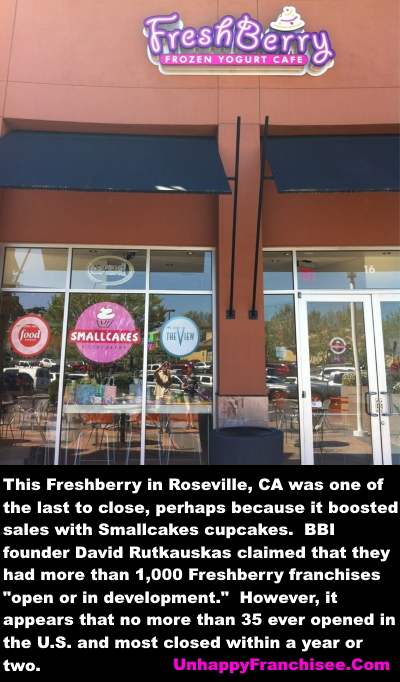 In reality, we believe that Freshberry never opened more than 35 or so U.S. locations, and many of those closed within a few years.

Adding to the exaggeration was the fact that many that they counted as full locations were actually co-branded with Smallcakes cupcake franchise, as neither seemed to be viable on their own.

As of 2021, but three Freshberry-branded stores have closed or rebranded, and its likely they have no contact with the franchisor.

Some of the most recent closures had been listed for sale, unsuccessfully, at prices well below the estimated start-up costs of $165,750 to $386,200.

In our opinion, Beautiful Brands did a masterful job getting publications such as Tulsa World, QSR & Fast Casual to promote FreshBerry as a franchise success story.

However, it appears to UnhappyFranchisee.Com that BBI has sold hundreds of FreshBerry franchises that have not opened – and never will.

Of course, we are drawing this information from publicly available sources (the company franchise disclosure document, websites, articles).  We have asked the company for verification of accuracy and completeness, but have not yet heard back from them.

Each FreshBerry franchise closure potentially could represent the loss of the approximately $165,750 to $386,200 initial investment, and also the capital added while trying to keep the business open, a settlement with the landlord on the remaining lease term, and other expenses and liabilities.  It could mean personal bankruptcy and loss of assets and credit scores for the franchisee.

Investigation by UnhappyFranchisee.Com has revealed that the number of FreshBerry franchises that have closed has reached the number that are open:

Hundreds of FreshBerry franchises were reportedly sold, but not opened For years, we have read the gleeful announcements of huge expansion deals and franchise packages sold by Beautiful Brands, yet haven’t seen much about the franchise units ever opening.

On 12/23/09, QSR wrote that BBI announced that it would be expanding into Virginia & Maryland through a 100 unit franchise expansion deal.

“Virginia and Maryland are a big part of our overall expansion strategy,” David Rutkauskas, Beautiful Brands founder, president, and CEO, was quoted as saying.

As of 1/10/13, the number of FreshBerry locations open in Virginia and Maryland is 0.

“Without a doubt, this is the largest deal in BBI’s history,” David Rutkauskas told QSR magazine. “The appeal of both concepts tops the charts as golden opportunity franchises and solid investments in two clearly defined industry segments.”

Rex’s Chicken has 1 company store in OK, and 0 in the other states mentioned. QSR quoted David Rutkauskas as saying “We’re thrilled to be partnering with Frozen Dreams to reach this geographical milestone and continue making our western growth strategy a sweet success.” In 2010 & 2011, QSR magazine repeatedly reported that Beautiful Brands International had more than 1000 FreshBerry franchises “in development.”

What happened to the more than 958 locations that were announced, then never mentioned again?

* Estimated, as of 4/24/14.  We have asked the company for verification of accuracy and completeness, but have not yet heard back from them.  Some stores may have gone independent & rebranded rather than closed completely.

ARE YOU A FRESHBERRY FRANCHISE OWNER OR FRANCHISEE?

ARE YOU FAMILIAR WITH THE FRESHBERRY FRANCHISE OPPORTUNITY OR BEAUTIFUL BRANDS?

DISCLAIMER:  Our posts contain the personal opinions of UnhappyFranchisee.Com, based on publicly available information… and we could be wrong about anything and everything.  We invite our readers and the companies we discuss to set us right.