According to the June 25, 2008 story by Carl Orth in The Suncoast News, Cork & Olive Trinity is positioned to “uncork the secret to success” after the collapse of the franchisor company. The store is heavily discounting its wines up to 75%? May be changing its name?

Cork & Olive Trinity has remained open at 10700 S.R. 54, manager Jesse Boblooch reports, even while the nine-store chain based in Tampa collapsed.

“We weren’t affected by corporate closing because we are an independent franchise,” Boblooch said. “However, I feel business was affected because of the articles (which) ran, people assumed we were closed.”

The store is moving in new directions, with a name change possible in the future, Boblooch reports.

“We have brought in a bunch of new sweet wines to our store, people around here always ask” for them, Boblooch said. To give the store its own personality, the staff has hand selected wines such as Villa Rose Moscato, Jonesy Port and Hey Mambo.

In the meantime, the corporate inventory of wines has been heavily discounted by as much as 75 percent off.

“We are coming up with some new ideas, and plan on making some changes to the whole store concept,” Boblooch pointed out. “We will still feature the free daily wine tastings that is a great way for us to get to know our customers and find out what they are looking for.”

Is Trinity part of the franchisee co-op? Is this article accurate?
WHAT DO YOU THINK? SHARE A COMMENT BELOW. 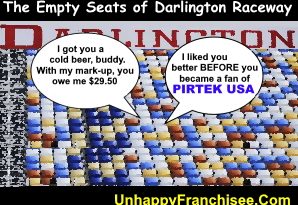