General Counsel of the National 7-Eleven Franchisee Association claims its Executive Officers did not vote for or endorse a franchisee protest at the company convention in Las Vegas, nor did they warn CEO Joe DePinto or 7-11 execs that they intended to protest.  An anonymous franchisee insider claims the association’s Executive Officers were an integral part of the protest plans, that they notified a company executive via conference call and delivered the ultimatum to DePinto in person.

Why the conflicting accounts? Who is telling the truth?

It’s Valentine’s Day, but the 7-Eleven franchisees involved with the Las Vegas protests of alleged franchisor discrimination and illegal store seizures ain’t feeling the love from their National Association.

Mr. Karp demanded that we retract the “gross misstatements” or UnhappyFranchisee.com will be held responsible (yikes!).

February 14th: After posting Mr. Karp’s letter, we received a follow-up statement from the anonymous 7-Eleven franchisee insider.  He seems to be claiming that NCASEF Executive Officers were integrally involved with the formation of the planned protest, and had warned a 7-Eleven executive and CEO DePinto of the possible protest both by phone and in-person.

UnhappyFranchisee.Com received the following statement from “7-Eleven Franchisee Insider,” who stated “I was given these detailed accounts by Presidents of the FOA’s and are true facts of Jan -20-2015 as stated.  I stand behind these statements that I was given.”

Executive officers present decided after much debate and discussion that Joe DePinto CEO 7-Eleven has failed to solve any of their five issues that they had given to him and all they were receiving “was lip service”. Executive Officers decided to hold a protest at the 7-Eleven Experience 2015 at the MGM Grand. All Executive board members were to take part in the protest.

The Executive Officers decision to hold a protest was conveyed to 7-Eleven in a conference call.

President of the Chicago FOA Ken Patel set up a conference call for 1:30pm on January 20th, 2015 between Jeff Schenck 7-Eleven Senior Vice President of Franchising and the Executive officers all present except Hashim Syed who was visiting Pakistan.

The call which took place at 1:30pm PST January 20th 2015 was between 7-Eleven Inc and National Executive Officers:

Ken Patel put the call on speaker phone for all Executive Officers to listen and speak. Jeff Schenck was told by by Executive Officers that the CEO Joe DePinto has failed to respond to any of the points that were given to him by the 7-Eleven National Franchisee Association. It has been a “lip service” from 7-Eleven and the CEO to address our issues which remain standing. We will hold a protest at 7-Eleven Experience is the message that was given to Jeff Schenck.

After the call it was decided by 7-Eleven for the National Executive officers to hold a meeting with the CEO of 7-Eleven on Feb-04-2015 in Dallas TX.

Before the meeting the Executive officers met in Dallas and discussed that if the CEO works and accepts any  two issues out of the original five of their issues they would call off the protest.

During the meeting with the CEO in Dallas on Feb-04-2015 much was discussed and nothing was resolved (except on the low volume store issue the CEO said he will at the 7-Eleven Experience disclose the policy).

The Executive team left Dallas empty handed and their decision to go on with their original plans.

February 15, 2015:  UnhappyFranchisee.Com responded to Mr. Karp’s letter and asked for substantiation of his claims:

UnhappyFranchisee.com has several questions for Mr. Karp and the NCASEF leadership.

We ask him to explain the conflicting accounts between his version and the much-more detailed version provided by Franchisee Insider.

We also wonder, even if the NCASEF was not the driving force behind the Las Vegas protest – or if its officers had a change of heart at the last minute – why not express support for its members who chose to exercise their right to speak out about the issues I assume NCASEF itself has raised with Mr. DePinto?  Their website states “NCASEF’s goal to represent the interests of franchisees.”  Aren’t those interests best served when a national franchisee association supports its franchisees – even if it disagrees with their tactics?

Third, on a personal note, we wonder why would the General Counsel of the NCASEF send a threatening letter to a website that clearly is sympathetic to the challenges facing its franchisees, one that has called for fair treatment of 7-Eleven franchise owners on multiple occasions?

The heavy-handed, unnecessary threat in Karp’s letter (“We demand that www.unhappyfranchisee.com  retract that portion of the article quoted above, failing which we will hold you and unhappyfranchisee.com responsible for any damages caused by these gross misstatements.”) is the kind of thing we would expect from an association representing a particularly vindictive franchisor, not something we would expect from fellow advocates for franchisees.

We hope that Mr. Karp and the NCASEF leadership will address these questions fully and directly.

We invite all involved to share their opinions and insights into these important issues with a comment below. 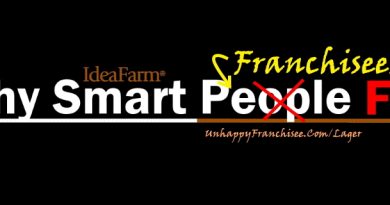 14 thoughts on “7-ELEVEN: Did NCASEF Initiate the 7-11 Franchisee Protest in Vegas?”