(Unhappy Franchisee) Franchise company Wireless Toyz Inc. will not have to pay a Colorado franchisee the $200,000+ award he won in a 2010 lawsuit, according to a story in Crain’s Detroit business.

In February, 2010, a jury verdict against Wireless Toyz and its finance director and VP of franchise development Richard Simtob, awarded franchisee David Abbo and Colorado Toyz Inc. $180,600 in damages against Wireless Toyz and $20,000 against Simtob on a single count of silent fraud.  “Silent fraud” occurs when one person defrauds another by “failure to disclose material facts or creating a false impression, rather than through overtly false statements.”

Earlier this month, Oakland County Circuit Judge Shalina Kumar threw out the prior verdict and ruled in favor of Wireless Toyz.  Kumar found that jurors in the trial weren’t instructed that Abbo must have relied on a false impression from Wireless Toyz to prove silent fraud. She also found that a disclaimer in the franchise agreement appears to contradict any alleged ‘extracontractual statements’ that may have been misleading.”

Other lawsuit claims, which included fraud, negligent misrepresentation and violations of franchise law either, were dismissed or resulted in no damages.

Wireless Toyz issued a celebratory press release that called the lawsuit “frivolous,” and seemingly attempted to position the judge’s ruling as an endorsement of the high ethical and moral fortitude of the embattled Wireless Toyz franchise organization.  However, it seems that the dismissal was more a result of inadequate jury instruction in the original trial as well as disclaimers in the franchise agreement known as merger or integration clauses,  rather than the integrity of the Wireless Toyz sales process.

Here is the Wireless Toyz franchise lawsuit press release in its entirety:

SOUTHFIELD, Mich.–(BUSINESS WIRE)–Wireless Toyz, Joe Barbat its founder and CEO, Richard Simtob and Jack Barbat have prevailed in a frivolous lawsuit filed by a disgruntled franchisee. After a four week trial last year before the Oakland County Circuit Court, the jury found no cause of action on eight of the nine counts alleged. Earlier this week, the honorable Judge Shalina D. Kumar granted judgment in favor of Wireless Toyz and its aforementioned executives, vindicating them from all charges. Judge Kumar held that plaintiffs’ claims were barred as a matter of law, and further ruled that:

Defendants correctly argue that the evidence adduced at trial established that Plaintiffs were not defrauded or mislead regarding the extent of their franchise.

The Court finds that the evidence shows that Defendants did not conceal the existence, nature, uncertainties or financial effects of the franchise opportunity.

The Court finds that under Michigan law, the merger/integration clauses and signed acknowledgements are valid, binding and enforceable, and bar Plaintiffs’ claim, which is based upon alleged extra-contractual and oral misrepresentations and omissions, as a matter of law.

“This ruling speaks to the true ethics and moral principles of how Wireless Toyz operates and was founded,” states, Barbat. “My objective was to see justice prevail, although it was a long and costly road, I was confidant that in the end justice would indeed prevail,”

In October of 2009, Barbat re-acquired the company he founded. Since then, the company has experienced positive momentum with increased same store sales in 2010. Barbat is focusing his time and effort on enhancing Wireless Toyz’s business model. “We have hired a new operations manager, an accountant and will be opening new stores in 2011 and 2012. I am glad to put this chapter behind us and am committed to focusing on building the business by creating jobs and strengthening our already proven concept in the wireless industry.” said Barbat. This only goes to show that with Barbat back at the helm, Wireless Toyz is looking forward to continued success in the future.

Wireless Toyz is the largest independently owned chain of cellular superstores. Each Wireless Toyz outlet brings together cellular phones, accessories and service plans from multiple carriers, including Sprint, T-Mobile, Verizon, AT&T, Metro PCS, Cricket, Boost, as well as satellite TV offerings from industry-leading DirecTV. This broad selection simplifies shopping for consumers by eliminating visits to multiple stores. The company is headquartered in Southfield, Michigan, opened in 1996, and began franchising in 2001. The company had only nine locations that year, and today, 11 years later, it operates 95 stores in 12 states.

Founder Joe Barbat took a hiatus from the business in December 2007, selling off some of his shares and retaining his position as chairman of the board. In October 2009, Barbat returned as major shareholder and put together a new team to enhance the success of Wireless Toyz.

LEARNINGRX Franchise: A Great Business to Own? 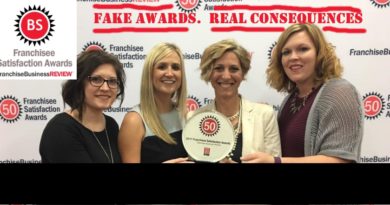