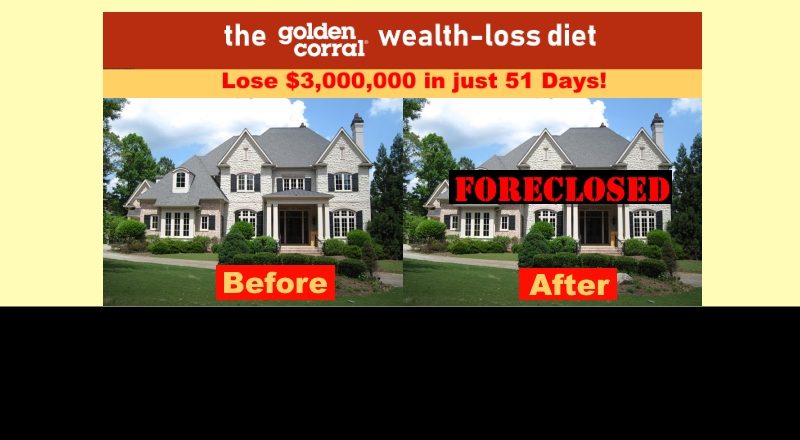 It took franchise owner Sherrance Henderson four years and more than three million dollars to open the Poughkeepsie, NY Golden Corral restaurant.  It took Golden Corral 51 days to terminate her franchise and allow a favored franchisee to take it over.  Golden Corral left Sherrance Henderson, a disabled single mother with two autistic children, with no way to repay the millions of dollars in loans co-signed by you, the American Taxpayer, through the SBA guaranteed loan program.  The first single African-American woman to own a Golden Corral franchise is now receiving food stamps and soliciting donations to a GoFundMe page. by Sean Kelly

(UnhappyFranchisee.Com)  There are many franchise programs that boast innovative weight-loss programs, but Golden Corral, it seems, has teamed up with TD bank and the American Taxpayer (through the SBA Guaranteed loan program) to create the ultimate, cutting-edge wealth-loss program. Does it work?  Just ask Sherrance Henderson.  The disabled single mother of two autistic children lost more than $3,000,000 when Golden Corral terminated her Poughkeepsie franchise only 51 days after it opened.

Henderson’s recently filed lawsuit documents the life-changing potential of the the Golden Corral Wealth-loss Diet, stating that Henderson “was once a multi-millionaire but was left penniless and if she and her children did not eat at Golden Corral they could not afford to purchase basic necessities, such as food.”

Now that Henderson’s Poughkeepsie franchise has been granted to another franchisee (with no compensation to her), Sherrance Henderson claims she and her kids are destitute & rely on food stamps to eat.

And Sherrance Henderson isn’t the only one to get corralled into the Poughkeepsie Golden Corral all-you-can lose franchise debacle.

The American Taxpayer is potentially on the line for millions of dollars that T.D. Bank issued to Henderson under the protection of the SBA Guaranteed Loan Program.

So it appears that the American Taxpayer foots the bill for T.D. Bank’s and Golden Corral’s decision to sell and finance a multimillion dollar franchise investment to a legally disabled woman who clearly had neither the experience nor the capability to succeed.

It appears that Golden Corral Systems, Inc. and T.D. Bank get to profit from transforming a woman with $2M cash in the bank (all gone), a mortgage-free home worth $1.75M (lost to foreclosure) and a credit score approaching 800 (now around 400) into a food stamps recipient… with a guarantee backed by taxpayer money.

(Are you familiar with Sherrance Henderson, T.D. Bank, Golden Corral Systems, Inc. and the Poughkeepsie NY Golden Corral franchise location?  Please share your experience and opinions with a comment below or by emailing us in confidence at UnhappyFranchisee[at]Gmail.Com)

For years if not decades, Golden Corral franchise investment ads have described their oversized buffet restaurant as a “10,000 sf cash register.”

Golden Corral franchise owners not only must be able to afford the $2.2 to $6.6M initial investment, they must be able to manage one of the most complex foodservice operations in franchising, and approximately 150 employees.

It appears that Golden Corral and their VP of Franchise Sales, Irwin Roberts, decided to break with their policy and sell Sherrance Henderson a Golden Corral franchise despite her complete lack of restaurant ownership or management experience, and despite a physical disability that would be challenging to manage a 150-employee workforce in a high-volume foodservice operation.

A legal newsletter reported that Sherrance Henderson became “totally disabled,” from injuries she sustained when an orthopedic doctor injected a solution into her spinal cord.  As a result, Sherrance Henderson sustained serious spinal cord damage and is a partial paraplegic who requires a four-tipped cane.  She received a multimillion dollar settlement from a medical malpractice lawsuit she filed in 2001.

At the time she met with Golden Corral VP Irwin Roberts at the Marriott Hotel lobby at the Atlanta airport to discuss her desire to become a Golden Corral franchisee, Sherrance Henderson allegedly had $2 million cash in her bank account, and a mortgage-free $1.75 million dollar home in a country club community, and a credit score approaching 800.

After a few short years on the Golden Corral Wealth-loss Diet, Sherrance Henderson’s $2M bank account would be empty, her $1.75 million house would be lost to foreclosure, her credit score would hit 400, and she would owe millions of dollars in bank loans, credit cards, defaulted leases and to dozens of creditors.

Unable to afford an attorney, Sherrance Henderson, the first and only single female African American franchise owner in Golden Corral history, would represent herself and file a lawsuit pro se.

The lawsuit she filed on her own behalf in the Supreme Court of the State of New York, County of Duchess (Sherrance Henderson, v. Golden Corral Systems, Inc., TD Bank, Small Business Admin Office of the United States, Lance Trenary, Niral Patel, Anthony V Segreti, Jane Doe, And John Doe) seeks a judgment against the named defendants in the amount of $350,000,000.00 for “compensatory damages for back pay, front pay, past and future employment benefits, damages for emotional distress, punitive and/or exemplary damages…”

The woman who not-so-long ago drove a $110,000 Porsche Panorama while wearing a $16,000 7 carat diamond tennis bracelet and a $130,000 Rolex Pearlmaster watch is now allegedly on food stamps and soliciting donations to a GoFundMe to try to meet the basic needs of herself and her two autistic children.

It is with great sadness that Ms Henderson seeks assistance to get her day in court.  It is vital that the sexual exploitation, harassment, and mistruths surrounding this case are exposed.  It is only with your help that this will be a possibility, as Ms Henderson has been left destitute by the corruption of the companies involved.

We invite those involved with the development, funding, opening and support of the Golden Corral franchise location in Poughkeepsie, NY to provide corrections, clarifications, rebuttals or alternative points-of-view.

Share your opinion on these issues and more.  Anonymous commenting is fine.

We’d love to hear from the notable participants in the Golden Corral Poughkeepsie Wealth-loss Program, including: